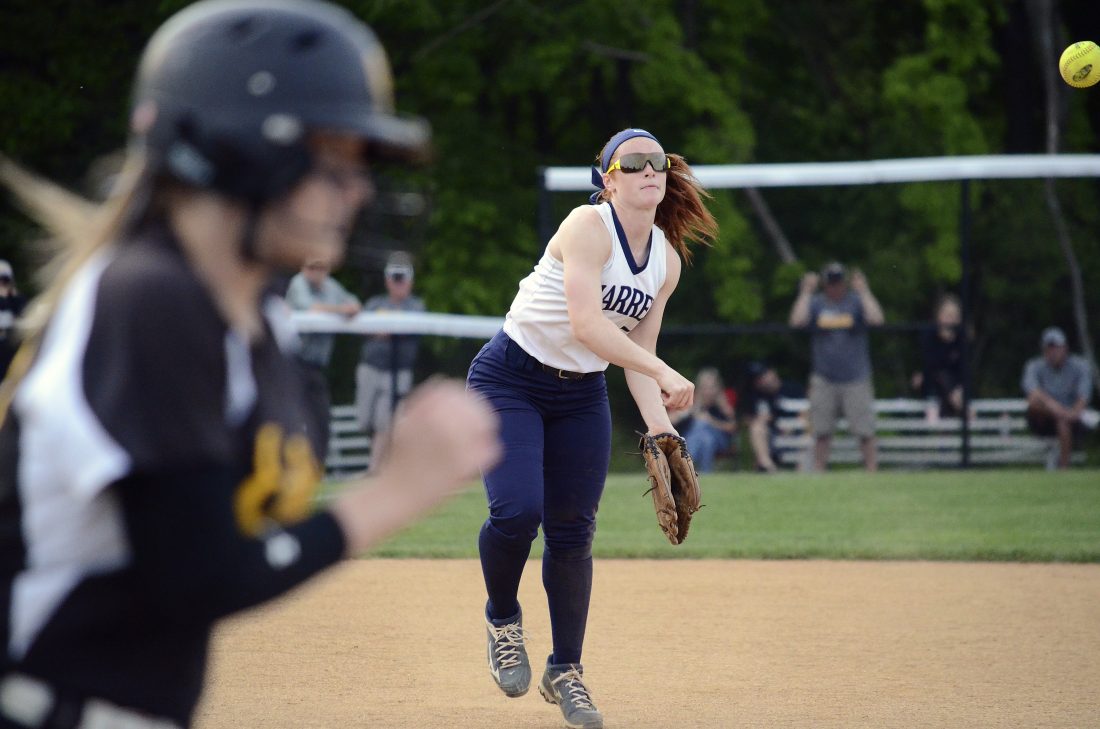 Warren shortstop Lex Nyquist (5) throws to first ahead of Grove City’s Chloe Saylor during the second inning of the District 10 Class 4A Softball Championship game at Penn State Behrend, Monday, May 27, 2019. Despite several outstanding defensive plays, the Dragons couldn’t get a run across in a 1-0 loss to the Eagles.

For the second consecutive year, Warren pitcher Ellie Lobdell took home both Region 7 Pitcher and Player of the Year honors when the region all-star teams were announced Friday.

Far from a one-woman show, the Dragons had seven other players earn first-team honors and another made second-team. Joining Lobdell on the first-team were Kiersten Hoffman (C), Celia Chase (1B), Julia Lobdell (2B), Alex Neureiter (3B), Lex Nyquist (SS), Gracie Wood (OF) and Kelsey Stuart (OF). Grace Wortman (OF) earned second-team honors.

In the circle, Ellie Lobdell was stellar. The senior, who will continue her career at California University (PA), pitched Warren to an 18-2 record with a nice 0.69 ERA. In 122 innings, she gave up just 59 hits, only eight for extra bases, with 27 walks, and 175 strikeouts. Ellie Lobdell also threw nine shutouts with four no-hitters and a perfect game.

“As I told the girls at our banquet this week, this team, this group, was easy to root for,” said Warren coach Jon Sitler, “because they are even better people than players. So, for the other region coaches to recognize them on the field makes me smile. They deserve everything they get for everything they have put into this, which is nothing short of their heart and soul.” 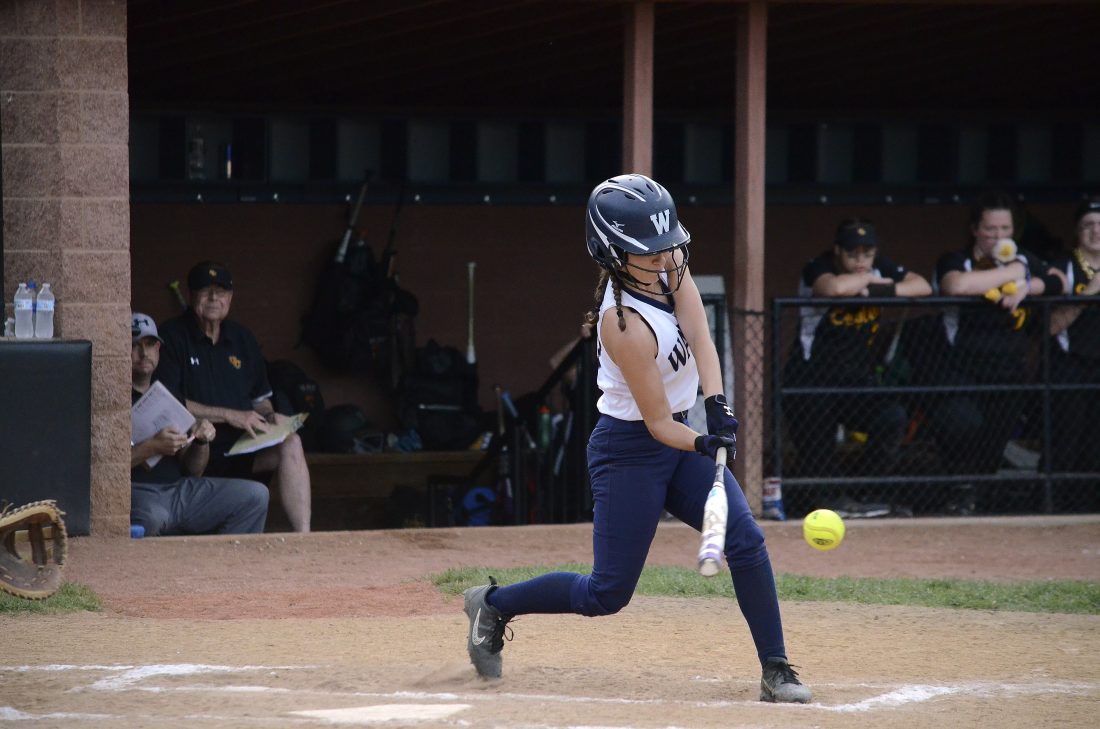 Warren’s Julia Lobdell connects for a single during the fourth inning of the District 10 Class 4A Softball Championship game against Grove City at Penn State Behrend, Monday, May 27, 2019. Lobdell’s single was the only hit of the game for the Dragons who fell to the Eagles, 1-0.

Hoffman, an Edinboro signee, was the first-team catcher after switching from third base due to an injury to Wortman. She hit .460/.521/1.378 with eight doubles, a triple, five homeruns 24 runs scored and 15 RBI. Julia Lobdell, a senior, and Nyquist, a junior, formed a potent middle infield duo and provided a solid 1-2 punch as the top two hitters in the Dragons lineup. Nyquist was third on the team in average, hitting .437/.487/1.079 with eight doubles and a homerun. She scored 26 runs and drove in 19. Julia Lobdell hit .403/.441/.941 with three doubles and her first career homerun. She scored 17 times and drove in 15. She also led the team with seven sacrifice bunts.

Wood, a senior, earned her second straight first-team honor. She provided solid middle of the order pop offensively, and roamed centerfield defensively. She hit .434/.474/1.229 with eight doubles, three triples and a homerun. She had 17 RBI and scored 10 times. After earning first-team honors as a freshman outfielder, Chase found herself back on the first-team as a senior first baseman. Her offensive numbers were down a bit from a year ago (.234/.275/.666, seven doubles, a homerun, 13 RBI and 13 runs scored) but she provided stability at first with 121 putouts and only four errors on the season.

Sophomores Neureiter and Stuart made their first appearance on the all-region team this year. Stuart, who split time between right field and third base, hit .404/.407/.968 with six doubles, a homerun, 11 RBI and 18 runs scored. Neureiter stepped in as the primary third baseman once Hoffman moved to catcher, nearly became the seventh member of the lineup to hit .400 or better for the season. She finished with a .391/.417/.982 line with two doubles, a triple, three RBI and five runs scored.

Despite missing a number of games due to injury, and switching from catcher to right field once she returned, Wortman was solid enough in her new position to earn second-team honors. The junior hit .242/.297/.570 with a double, five RBI and a pair of runs scored. She also sported a perfect fielding percentage on the year. 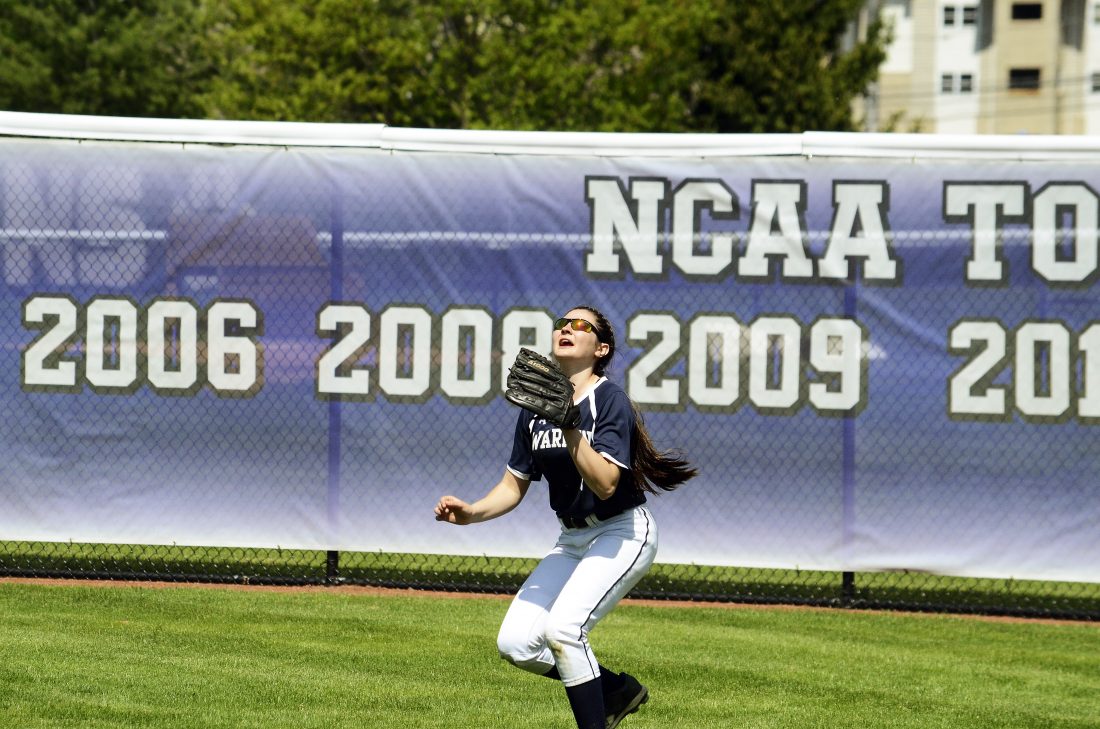 Warren right fielder Grace Wortman prepares to catch a fly ball during the first inning of a Class 4A District 10 Softball Semifinal game against Harbor Creek at Penn State Behrend, Thursday, May 23, 2019. The Dragons topped the Huskies, 11-0, in five innings to advance to Monday’s championship game against Grove City.

The junior assumed the full-time starter role midway through the season and helped lead the Knights to wins in four of their final six games. She was also key contributor in the middle of Eisenhower’s lineup. 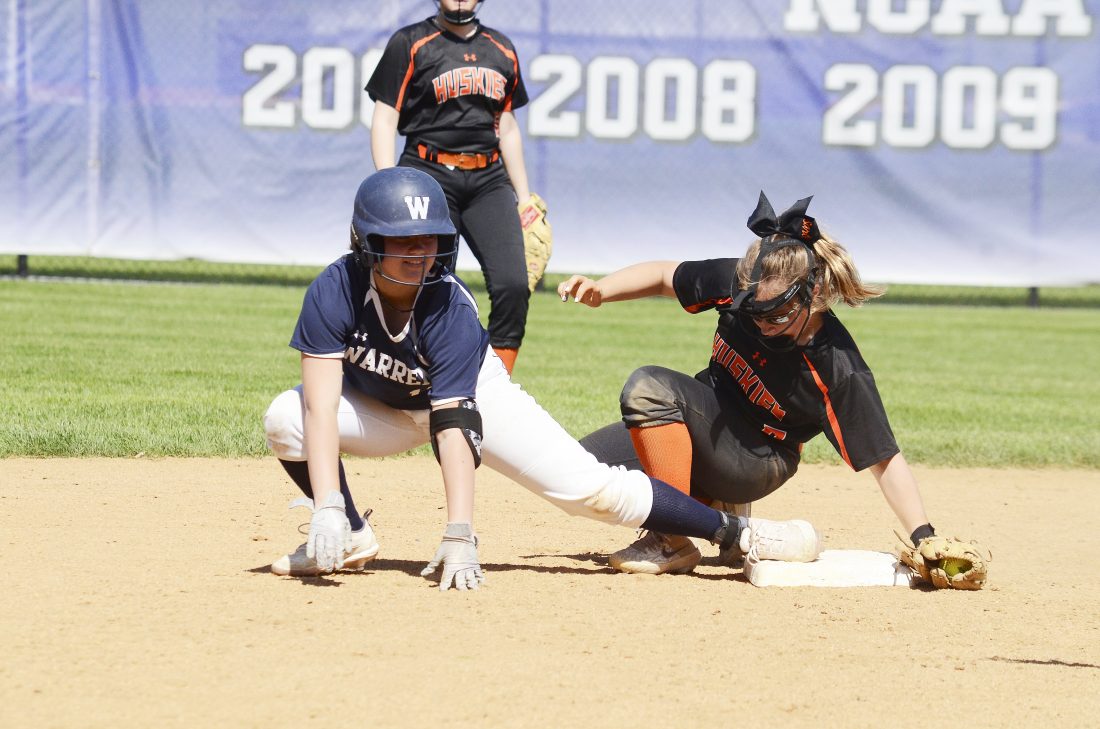 Warren’s Kelsey Stuart smiles after holding on to second base by her tiptoes while Harbor Creek shortstop Regan Rand falls back after applying the tag during the fifth inning of their Class 4A District 10 Softball Semifinal game at Penn State Behrend, Thursday, May 23, 2019. The Dragons advanced to their seventh D-10 championship game since 2010 with an 11-0, five inning win over the Huskies. 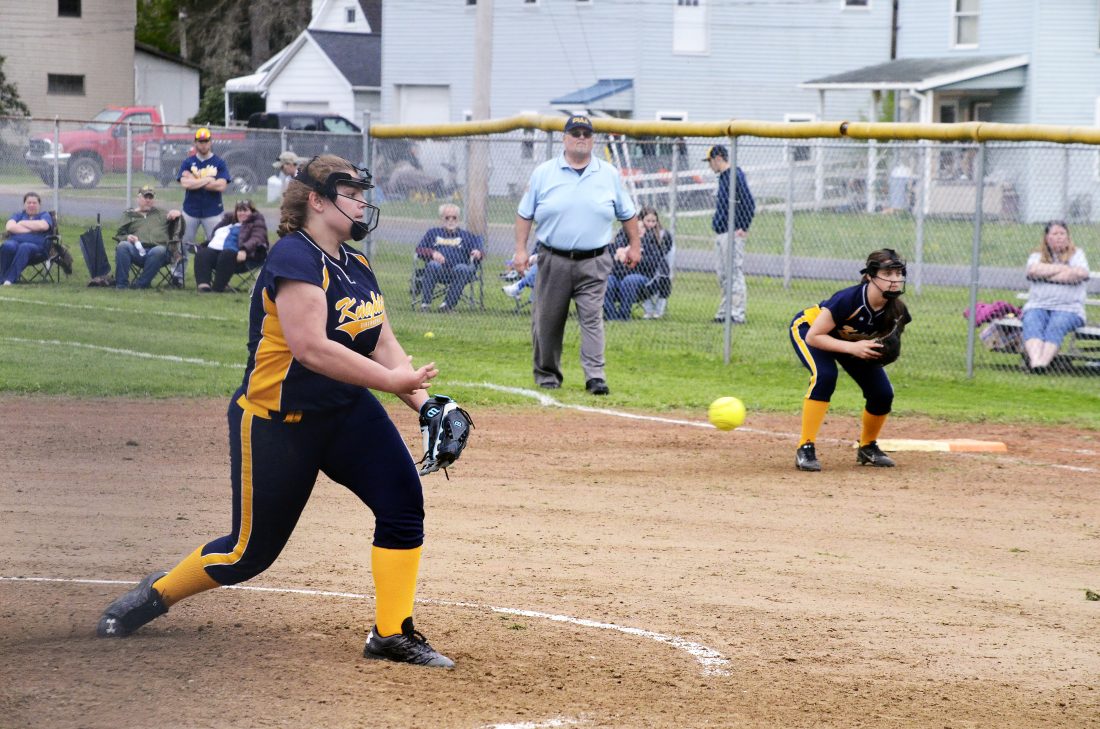 Eisenhower pitcher Alexis Courtney throws a pitch during the second game of a doubleheader against Youngsville at Youngsville High School, Friday, May 3, 2019. The Eagles won the first game of the evening, 13-3, while the Knights took the second, 12-5. 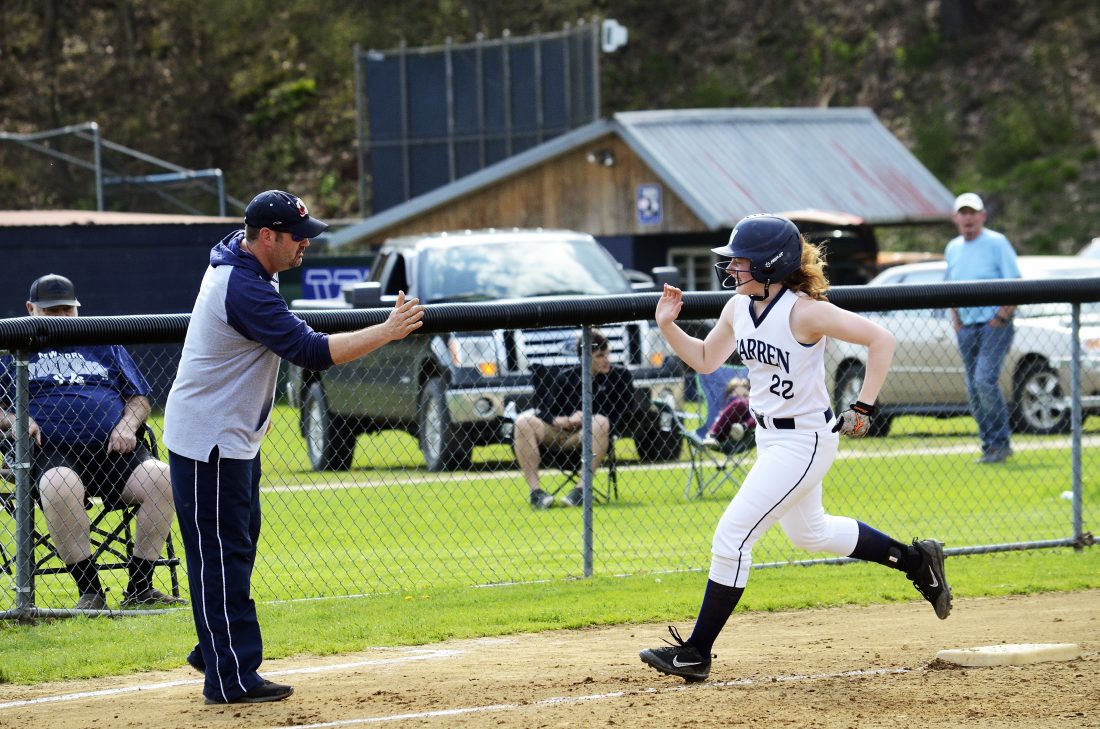 Warren’s Celia Chase smiles as she rounds third and prepares to high-five coach Jon Sitler following a 2-run homerun in the third inning of a game against General McLane at Legion Field, Wednesday, May 1, 2019. The opposite field shot was part of an 8-run inning for the Dragons, who went on to top the Lancers, 15-0, in four innings.

Sarah May Commodore Perry 11 OF

Note: Per District 10 rules, a region must have at least four teams for a first and second team, but Region 8 has just three teams. 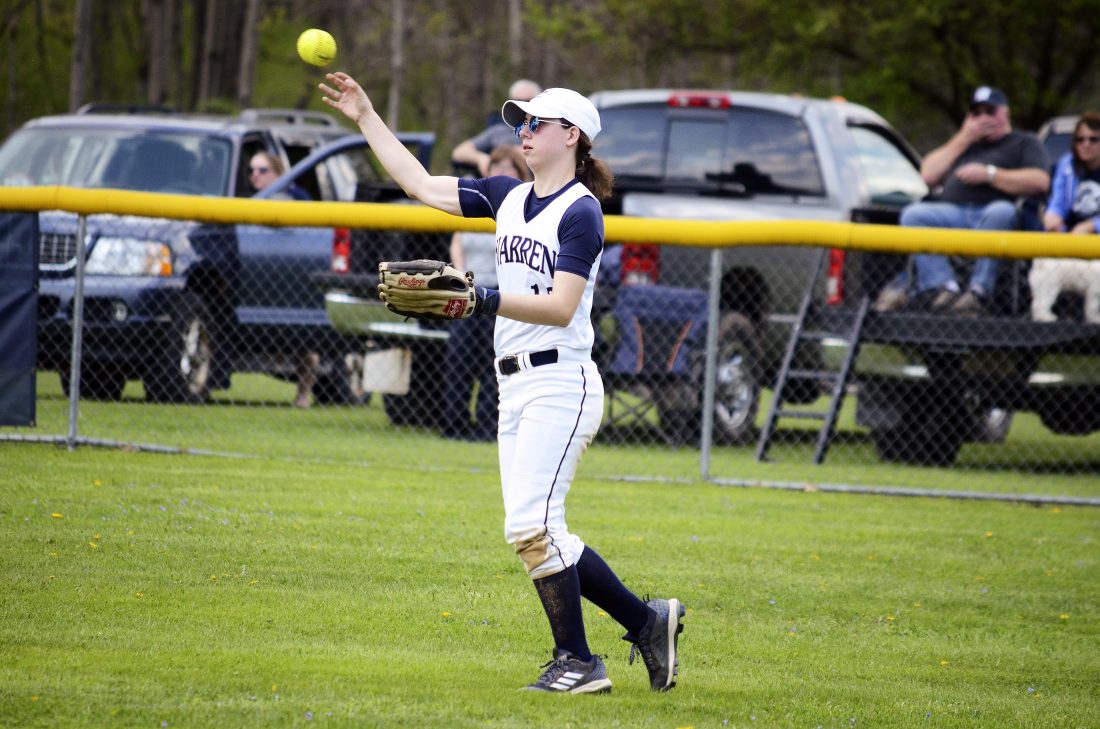 Warren centerfielder Gracie Wood throws the ball to second base during a game against General McLane at Legion Field, Wednesday, May 1, 2019. The Dragons won the Region 7 contest, 15-0, in four innings. 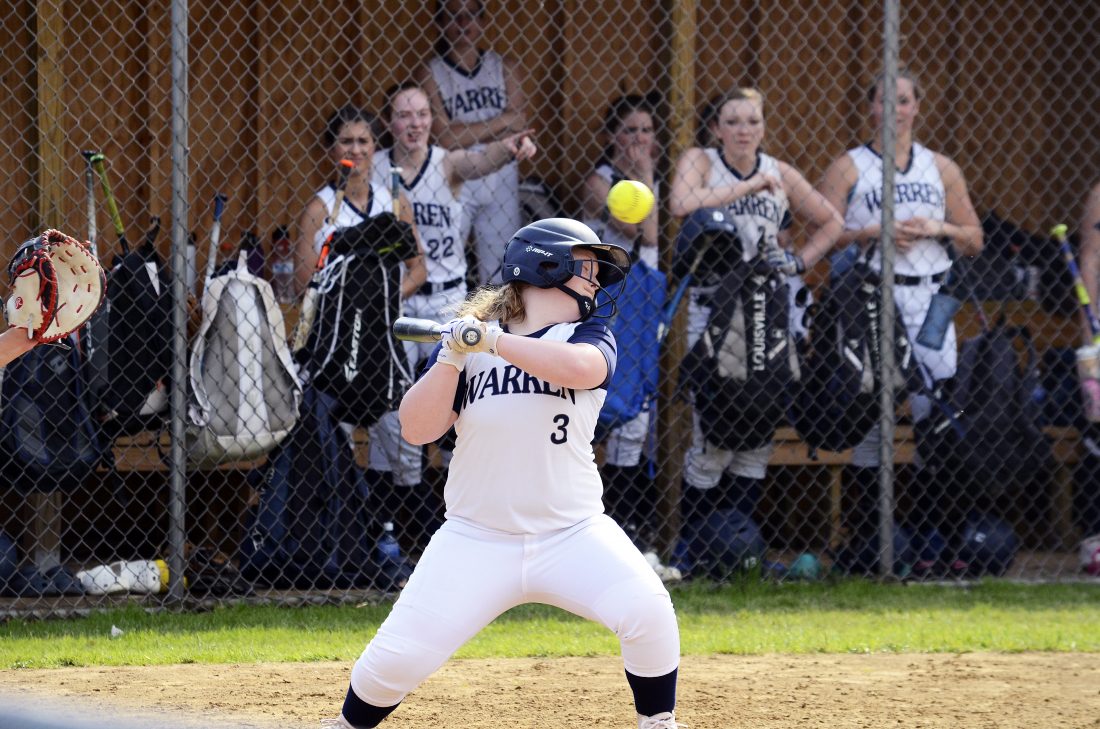 Warren's Alex Neureiter ducks out of the way of a pitch during a game against General McLane at Legion Field, Wednesday, May 1, 2019. The Dragons beat the Lancers, 15-0, in four innings. 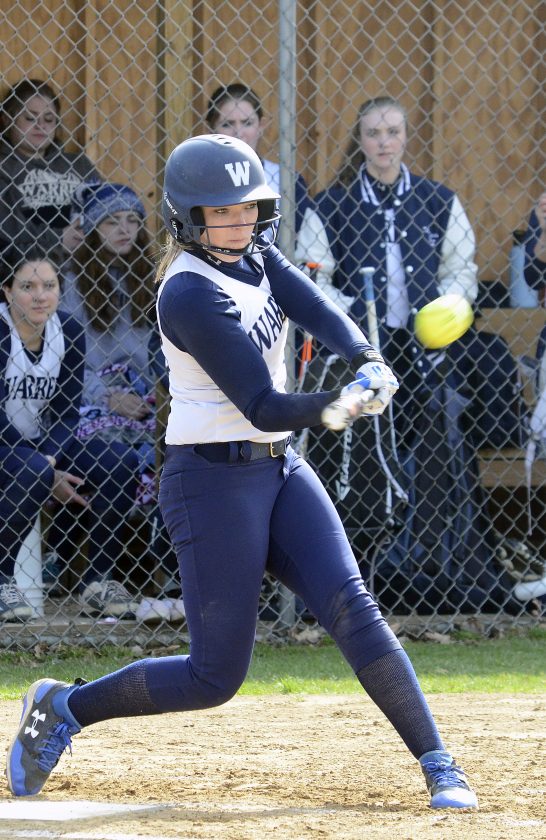 Kiersten Hoffman and the Warren Dragons take on Harbor Creek in the D-10 semifinals on Thursday at Penn State Behrend (3 p.m.).