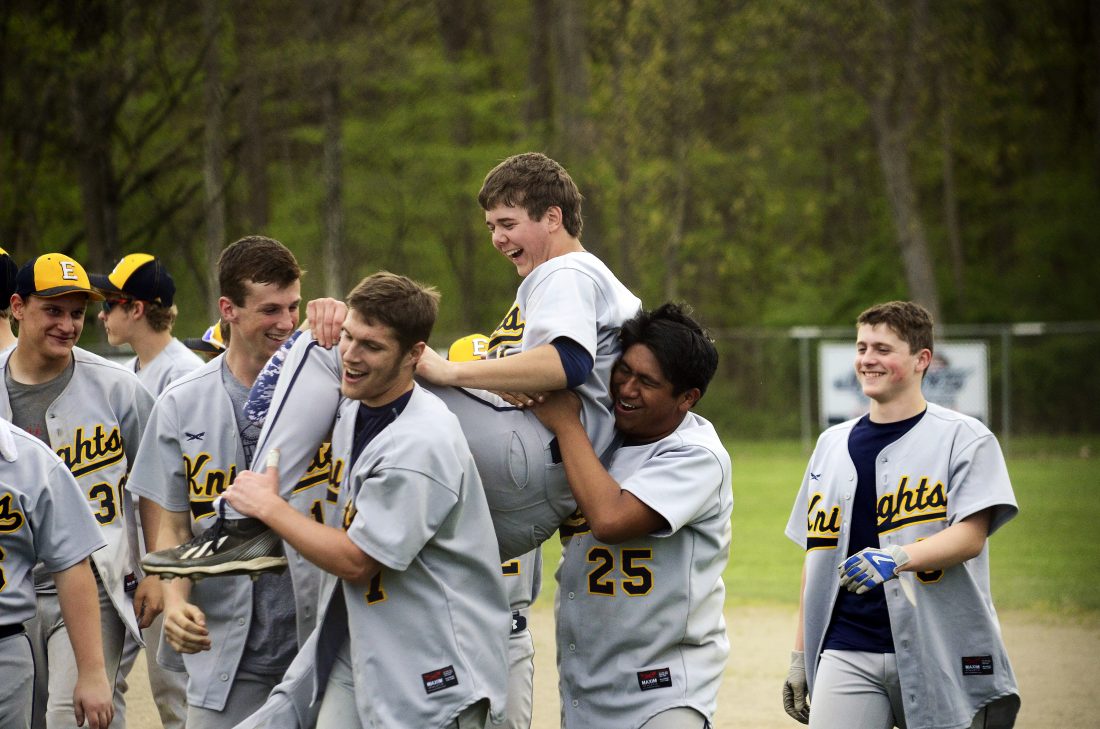 Times Observer photo by Brian Hagberg Eisenhower’s Dillon Benson (7) and Zach Rohlin (25) carry teammate Paul Swanson (31) off the field following his walk-off RBI single in a game against Maplewood at Werner Park, Wednesday, May 8, 2019. Swanson’s hit gave the Knights a 6-5 win over the Tigers.

While nearly every team celebrates a Senior Night late in the home schedule, it’s often an underclassmen who makes the biggest impact on the game.

Eisenhower baseball honored a pair of seniors Wednesday night, and one of them turned that night into a special senior moment.

With two outs, runners on second and third and the Knights tied, 5-5, with Maplewood, Paul Swanson stepped into the batter’s box. He hit a slow rolling ground ball to Chris Hochstetler. Hochstetler’s throw pulled first baseman Luke Marshall off the bag and down the line towards the plate. Swanson narrowly avoided Marshall’s tag and reached first base safely. The play allowed Dakota Chase to race home from third and gave the Knights a 6-5 Region 4 win over the Tigers.

“It feels fantastic,” Swanson said. “I knew I had to get out of the way (of the tag) and I knew right away I was safe.”

Swanson’s heroics capped a 3-run inning for the Knights who entered the final frame trailing 5-3.

Eisenhower starter Zach Rohlin only allowed two hits through the first four innings, but the Tigers (6-10, 5-6) got to him in the fifth.

Hochstetler hit a leadoff double and Cameron Bienio followed with a RBI single to cut the lead to 2-1. One out later, Camden Mattocks singled in Bienio to tie the game. Mattocks advanced to second and feigned a steal of third. The hard start induced a throw and an errant throw on the rundown allowed Mattocks to reach third. He scored on Tanner Carson’s ground out to give the Tigers a 3-2 lead. Rohlin gave way to Alex Roberts on the mound. Andy Gerow singled and scored later in the inning and Maplewood took a 4-2 lead into the bottom of the inning.

Hochstetler singled and scored again in the sixth to push the lead to 5-2.

The Knights got the run back in the home half.

Chase led off with a double and Benson singled him to third. With Swanson in the box, Benson took off for second on the first pitch. Jonathon Woge caught Chase flat-footed at third with a pickoff throw on the play. Swanson singled Benson to third and he came home when Roberts hit into a fielder’s choice.

Eisenhower kept Maplewood off the board in the seventh, then went to work.

Rohlin and Trumbull hit back-to-back singles to start the inning and each moved up on Jared Beers’ ground out. Chase was intentionally walked to load the bases for Benson. Benson worked the count full before he dropped a 2-run single into short right to set the stage for Swanson.

“We’re getting stronger,” Corse said. “We’re starting to connect as a team.”

Chase went 3-3 with a pair of runs scored, while Benson was 4-4 with a run scored and two driven in. Rohlin, Trumbull and Swanson each finished with two hits.

The Knights will look for their fourth straight win today when they welcome Saegertown to Werner Park.