Dragons fall by 1 run for fifth time this season 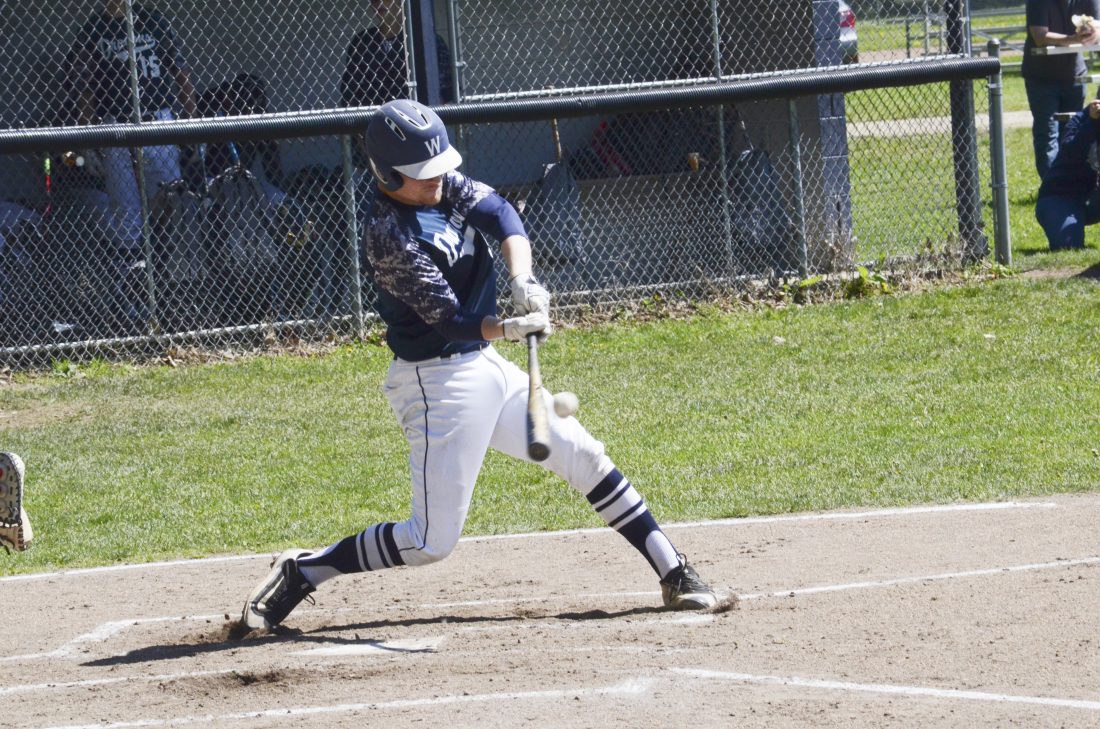 Warrenâ€™s Aidan Morrison connects during Saturdayâ€™s game against Meadville. Morrison, who along with fellow seniors Lance Baldensperger and Austyn Cummings played their final home game at Legion Field, went 1-for-4.

The Warren Dragons certainly hope the postseason will bring them better luck in close games, because they have been snakebit in the regular season.

Saturday’s game against Meadville was the latest such example

After the Dragons rallied to take a 4-3 lead in the bottom of the sixth, Meadville scored twice in top of the seventh and blanked Warren in the bottom half of the inning to earn a 5-4 victory at Legion Field.

“Everybody’s a little frustrated,” said Warren coach Rick Eaton. “They’re good ball games, but we’re just not getting one thing done, there’s one play that we don’t make. It’s putting us on the L side of an 11-6 record and we could have five of those six.”

That record comes with a run differential of plus-75, the by-product of losing five of those games by one run and the other by two. 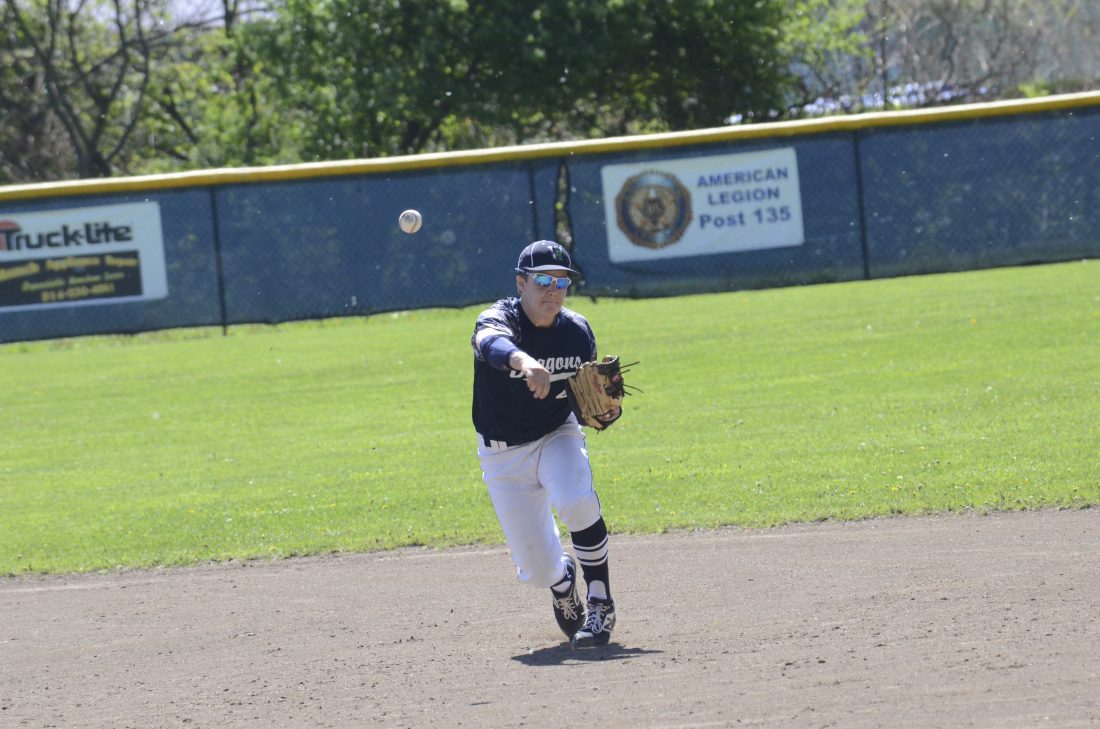 Warren shortstop Ryan Rafalski fires to first for an out.

The Bulldogs (10-5) jumped on the Dragons in the first inning with a 3-spot against Warren starter Mitch Grosch – all the damage coming after two outs. Alex Knox was hit by a pitch after Grosch retired the first two batters and starting pitcher Zach Wilson and Landon Beck both singled to load the bases for Ryan Ferry.

Ferry hit a sharp single to left the brought in a pair, and the third run came across on an error.

That was the bad news for the Dragons, but the good news was Grosch settled in after that.

He was dominant at times, recording 10 strikeouts in his five innings of work.

“He pitched well,” Eaton said. “If you don’t have two pitches too keep them on their heels a little bit you can get in trouble, and early on his fastball was the only one he was throwing for a strike. Once he established the curveball he was in good shape.” 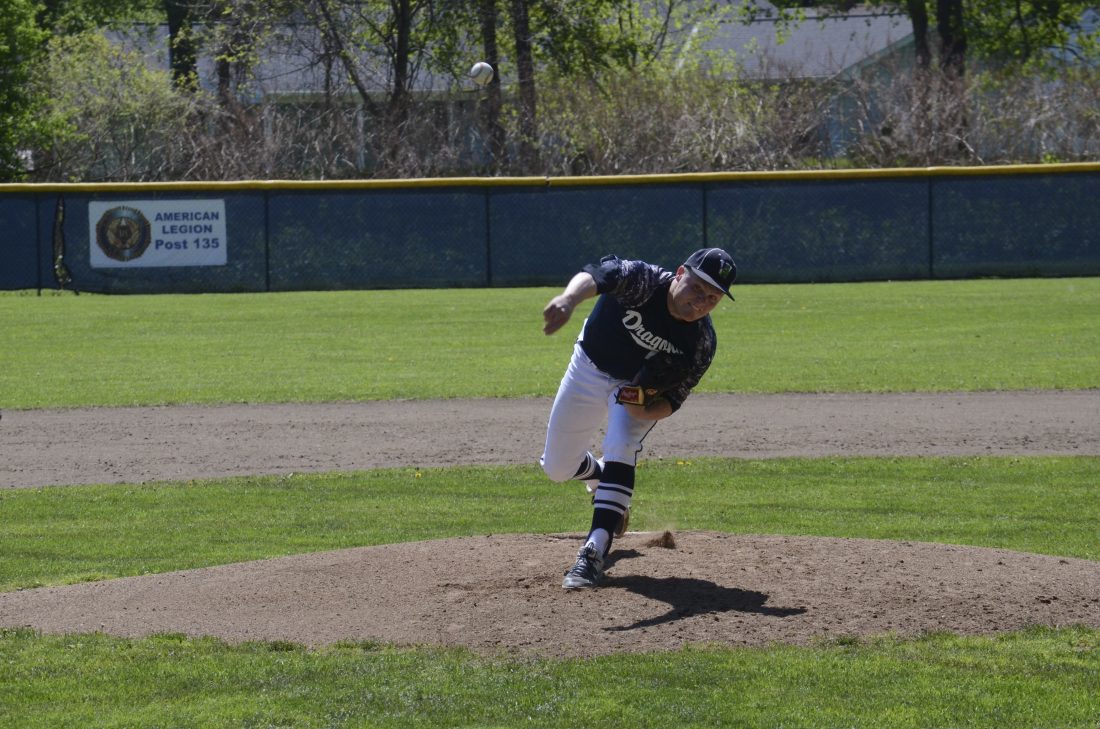 Mitchell Grosch delivers a pitch during the second inning of Saturday's game.

The Dragons methodically worked their way back in the game, getting one back in the bottom of the first after Grosch walked and came around to score on a wild pitch.

In the second, Wilson balked in Ben Berdine, who singled with one out. Ryan Arnold and James Swanson worked back-to-back walks, but Wilson was able to get a strikeout and groundout to escape with just the one run allowed.

Those were the only runs scored until the bottom of the sixth. Pitching and defense took over, with a leaping catch by Knox at second base robbing Ryan Rafalski of a base hit, and Warren centerfielder Lance Baldensperger tracked down a Nick Rinella deep fly ball, making the catch while running into the wall.

“The quality of these games have been really good,” Eaton said.

In the sixth, the Dragons loaded the bases with nobody out, and after Frantz, who came on relief of Wilson, got a strikeout, Grosch tied the game with a single. 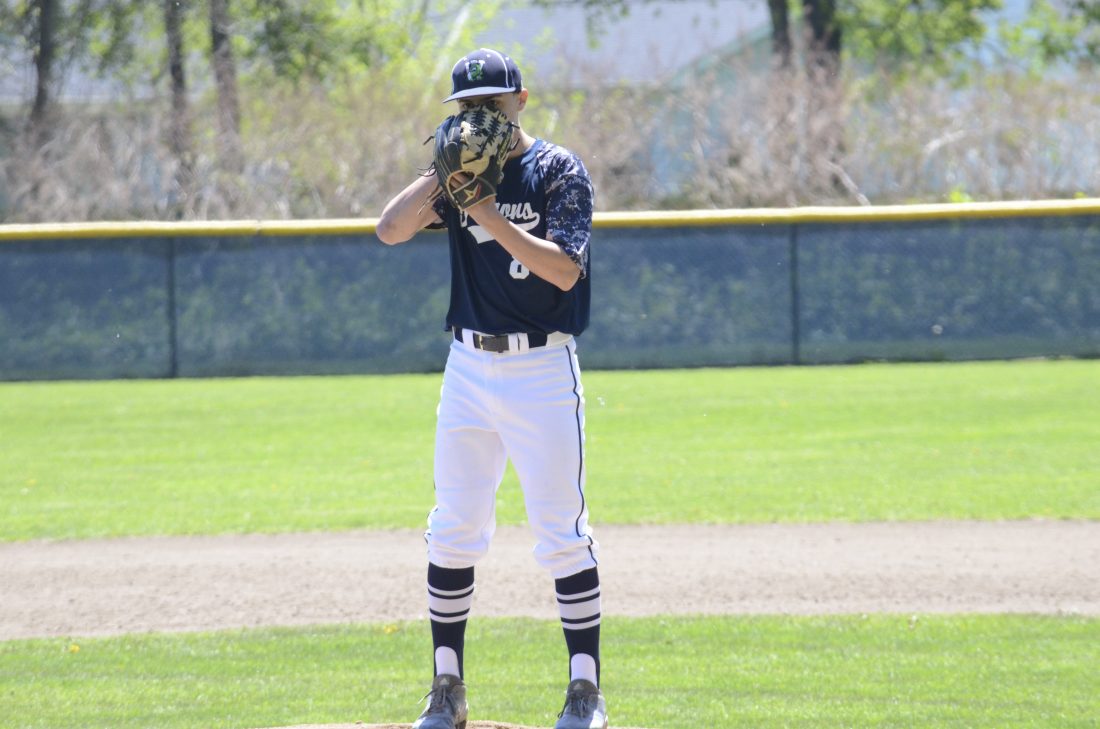 Warren junior Hunter Loomis peers over his glove before delivering a pitching during the sixth inning.

The Bulldogs infield came in, and Micah Passmore’s grounder was cut off by Knox, who threw home to gun down Berdine.

Austyn Cummings followed, and after singles in his previous two at-bats, was hit by Frantz’s 1-0 offering to force in the go-ahead run.

Frantz was able to strikeout Aidan Morrison to limit the damage, which turned out to be critical.

The seventh inning dramatics from the Bulldogs came against Hunter Loomis, who pitched a scorelesss sixth after relieving Grosch.

“If we can figure out how to get those little things to go in our direction, we can get on a really good roll here,” Eaton said. “That’s the key.”

The Dragons return to action with road games at Corry (Monday), Olean (Wednesday) and travel to take on the same Bulldogs team on Friday to close out the regular season.

James Swanson, Micah Passmore, Ryan Arnold and Tyler Gustafson limited the Bulldogs to just five hits as the JV squad picked up its 10th win of the season.

The Dragons took the lead on J.T. Blum’s sacrifice fly in the sixth and added an insurance run when Bryce Blair crossed the plate on a wild pitch.

Blum also had an RBI single in the second inning, and Alex Borger also had a big day at the plate with a double, triple and two runs scored. Guatafson also added a pair of hits.

Warrenâ€™s Aidan Morrison connects during Saturdayâ€™s game against Meadville. Morrison, who along with fellow seniors Lance Baldensperger and Austyn Cummings played their final home game at Legion Field, went 1-for-4.

Warren shortstop Ryan Rafalski fires to first for an out.

Mitchell Grosch delivers a pitch during the second inning of Saturday’s game.

Warren junior Hunter Loomis peers over his glove before delivering a pitching during the sixth inning.

Warrenâ€™s Andrew Beyer (middle) will attend Gannon University and will be a member of the Golden Knightsâ€™ swim team. Beyer was also a standout for the Dragon soccer team. He is pictured here with his parents.

Lydia Giannini (middle) will attend Allegheny College and major in chemistry. She will participate on the Gators Track and Field team. At Eisenhower she has been a standout on both the basketball and track and field teams. She is pictured here with her parents.