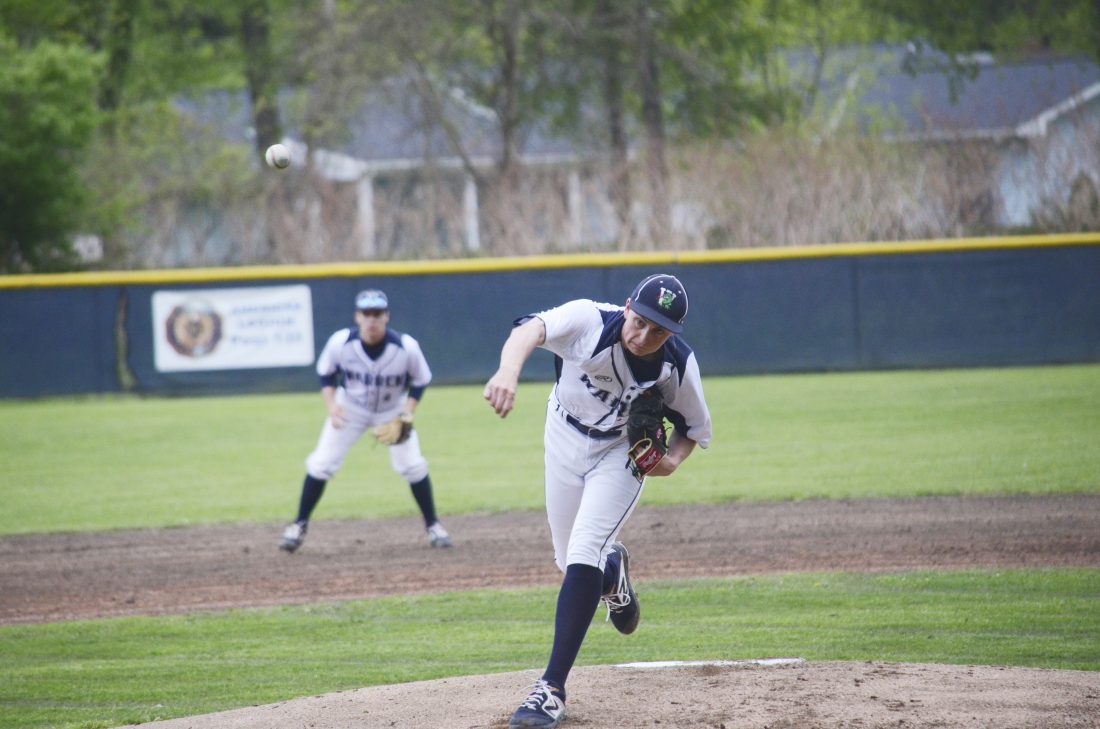 Ben Berdine and the Warren Dragons will face New Castle in the first round of the PIAA Class 4A state playoffs on Monday.

Those in attendance to watch Friday’s game between Warren and St. Marys were treated with a pair of brilliant pitching performances.

Utimately, however, it was one swing of the bat from the Dutch’s Shane Price that made the difference. With one on and out in the top of the eighth, Price took a Nick Hussey fastball over the left field fence, breaking a 2-2 tie and lifting the visitors to a 4-2 victory.

“It was a good baseball game to watch, a playoff-type game,” said Warren coach Rick Eaton.

The loss didn’t overshadow what was another top-notch performance from Dragon (11-5) starting pitcher Ben Berdine.

The sophomore gave up just a pair of unearned runs in his seven innings, allowing just five hits and one walk while striking out seven, the last of which came on his 100th and final pitch of the game to St. Marys’ Brandon Sicheri, who came into the contest with an average of .451. 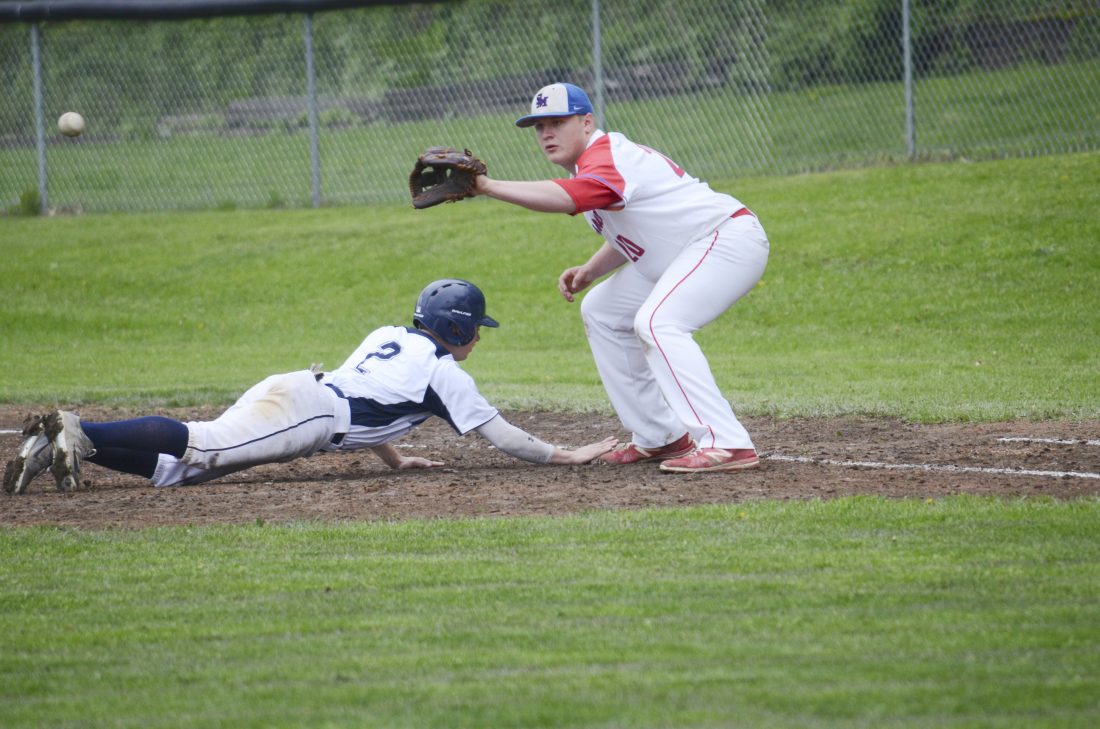 “Ben was tremendous,” Eaton said. “He gave up just the two unearned runs. He’s been lights out every time we put him out there. He’s opened some eyes and is only going to get better.”

The Dutch (9-7) struck for a run in the first after Sicheri singled and came around to score on a passed ball.

They took a 2-0 lead in the fourth when Nate Beimel reached on an error and scored on Garret Bauer’s single.

Matt Bellina got the start on the mound for St. Marys and pitched three solid innings before walking a pair in the fourth, giving way to Beimel, a travel ball teammate of Warren’s Aidan Morrison and Austyn Cummings with the Mid-Atlantic Red Sox last season who is signed to play at Columbia University.

Beimel came in and struck out Ryan Arnold, but Berdine helped his own cause with a ground ball down the third base line that brought home Ryan Rafalski, who reached on a fielder’s choice. 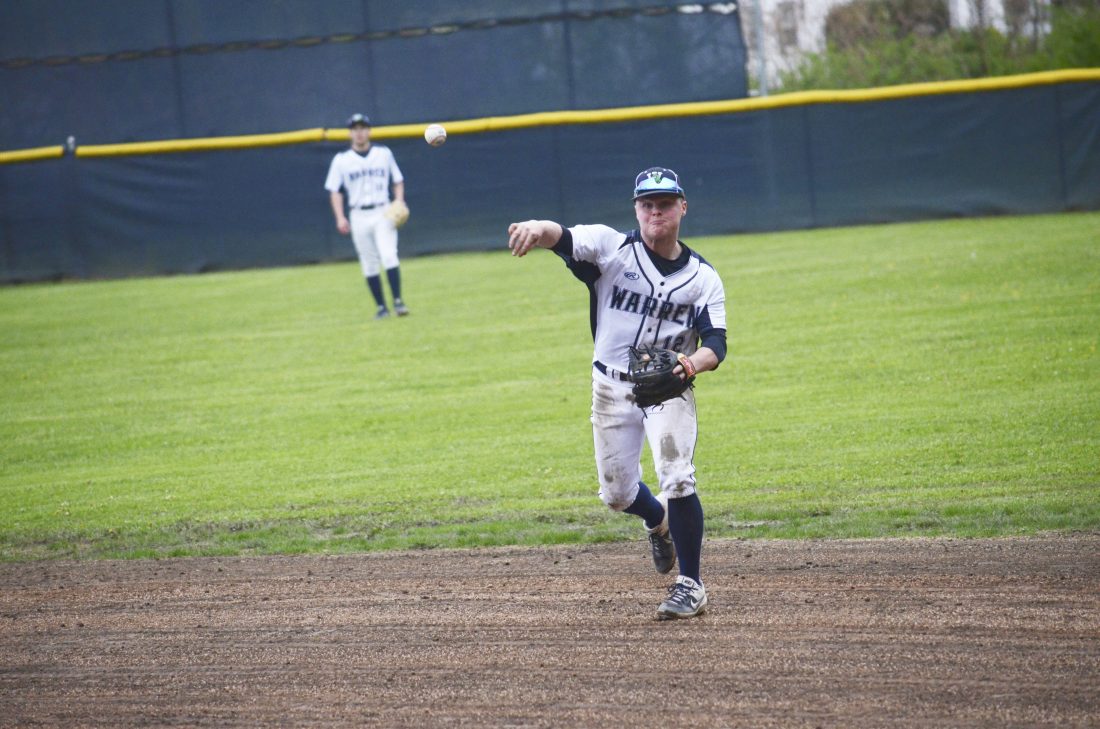 Warren second baseman Mitch Grosch fires to first for an out during Friday's game against St. Marys.

In the fifth, Mitch Grosch led off with a single and advanced to second on a balk call that was disputed by both Beimel and St. Marys coach AJ Meeker. Beimel struck out the next two batters, but Morrison, who made his first varsity start in left field, singled up the middle to tie the game at 2-2.

“We actually got to him a little bit,” Eaton noted. “He throws hard. We made some adjustments and had some kids hit him a little bit, but when you get in the hole, it’s tough. He has that good curveball to go along with his fastball. But that’s perfect for what we need to see going into the playoffs.”

That was it for the offense until the eighth, as Beimel and Berdine put on a pitching clinic.

Beimel, a 6-3 lefty, sat in the 86-87 mph range with his fastball, touching 90 to go along with a plus curve. The earned run against him in the fifth was just the third he has given up in 33 innings this season.

Berdine also showed off his plus velocity, limiting a St. Marys lineup that came into the game with a .347 batting average, including the top three hitters all hitting well over .400. 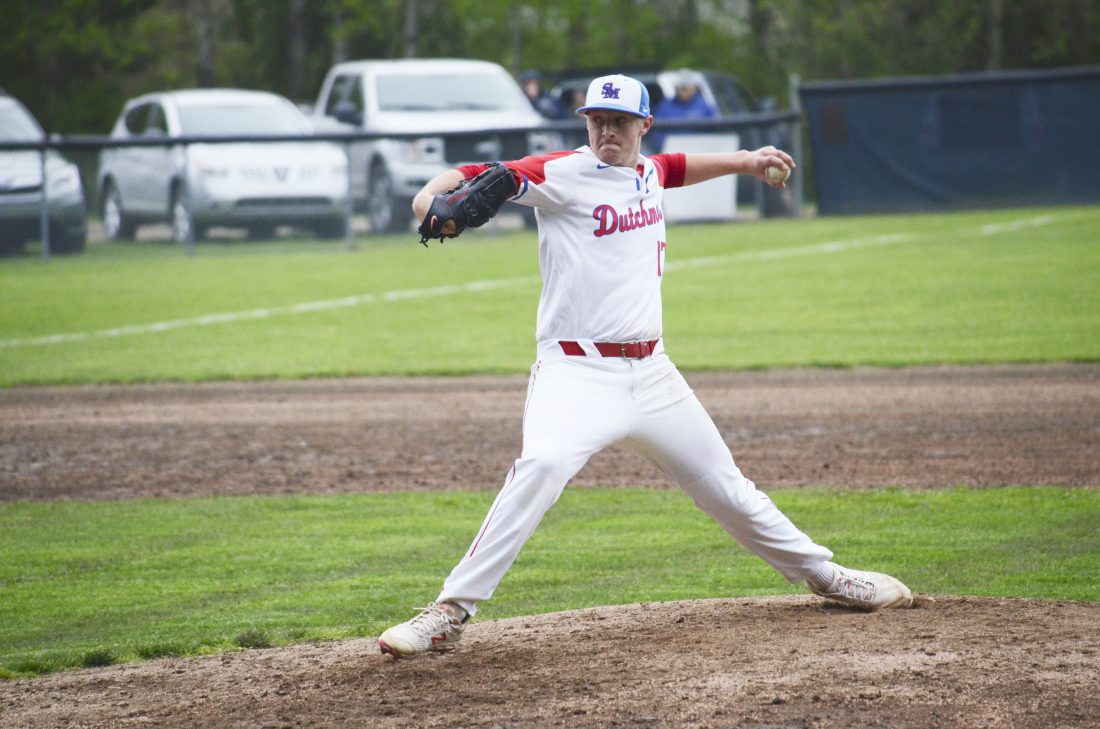 “The development in the two years we’ve had him has been phenomenal,” Eaton said.

The Dragons get right back at it today, facing a Meadville team that knocked them out of the D-10 playoffs last season before ultimately reaching the state semifinals. The Bulldogs are currently 9-5.

“We’ve got another good ball team coming in,” Eaton said. “We’ve had a nice schedule, which is going to benefit us in the long run.”

Tyler Gustafson and Ethan Wilson each drove in a pair of runs, while James Swanson had two hits in the Dragons’ JV victory.

Dylan Maeder tossed a complete game in getting the victory. He struck out two, walked one and allowed six hits, giving up two earned runs.

Warren second baseman Mitch Grosch fires to first for an out during Friday’s game against St. Marys.

Ben Berdine and the Warren Dragons will face New Castle in the first round of the PIAA Class 4A state playoffs on Monday.

Youngsville pitcher Alex Kemery flips the ball to first base to record an out during the first inning of a game against Saegertown at the Davis Street Field, Friday, May 10, 2019. The Panthers topped the Eagles, 18-3, in five innings.

Youngsville right fielder Damon Reese makes a catch during a game against Saegertown at the Davis Street Field, Friday, May 10, 2019. The Panthers defeated the Eagles, 18-3, in five innings.