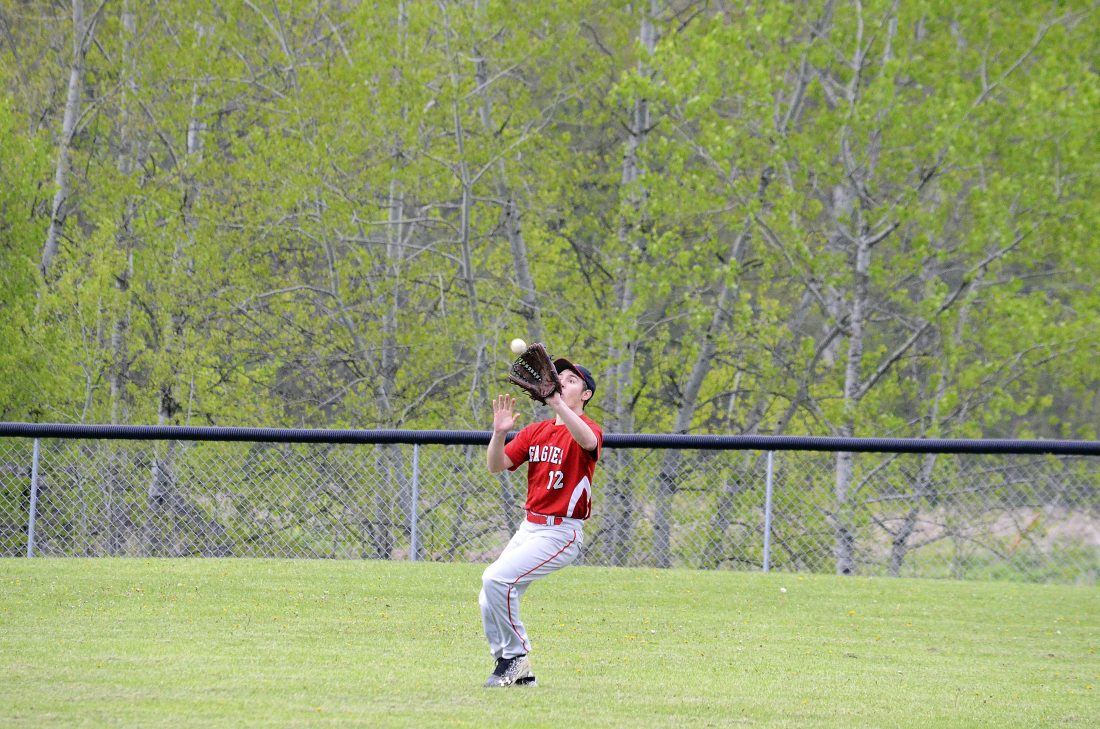 Youngsville right fielder Damon Reese makes a catch during a game against Saegertown at the Davis Street Field, Friday, May 10, 2019. The Panthers defeated the Eagles, 18-3, in five innings.

A 13-run fourth inning turned a 1-run game into a blowout and Saegertown cruised to an 18-3, five inning win at Youngsville Friday.

The Panthers (8-6) lead 4-3 after three innings, but collected 11 hits and took advantage of several Eagles (3-12) miscues to break the game wide open in the fourth.

Saegertown opened the scoring in the first.

With one out, Ryan Sherry singled to left and moved to third on a wild pitch and passed ball. Wesley Price walked to put runners on the corners and Sherry came home on Landon Caldwell’s ground out.

Youngsville answered with a run of its own in the home half. 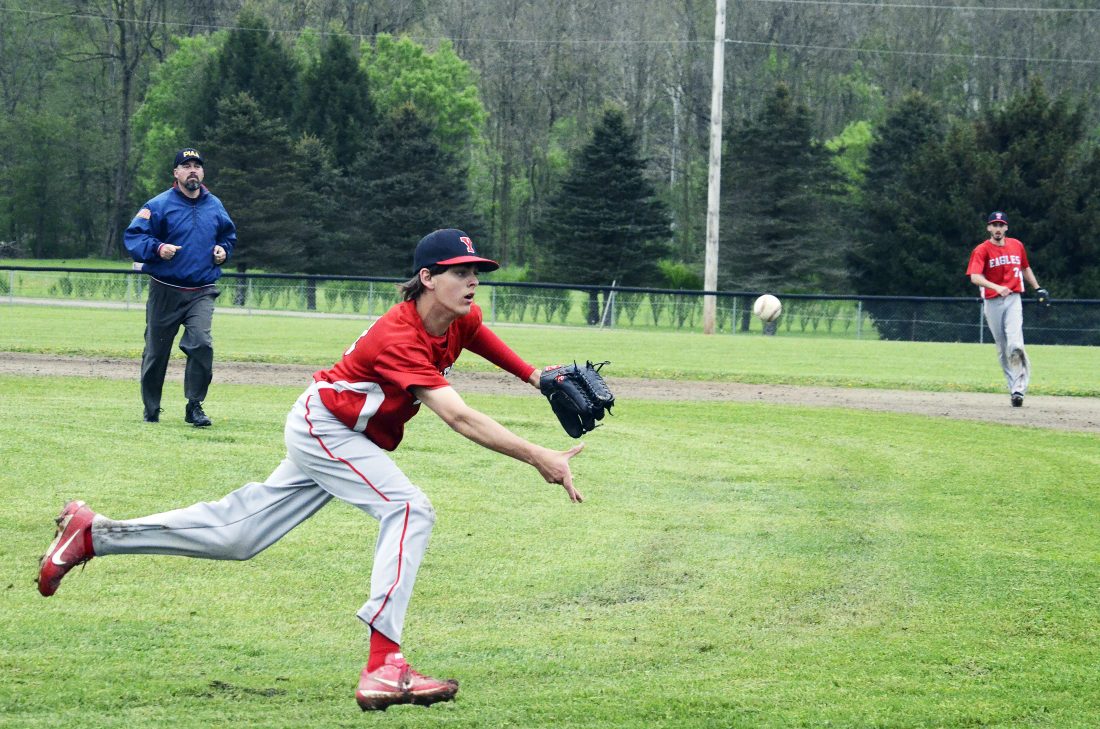 Youngsville pitcher Alex Kemery flips the ball to first base to record an out during the first inning of a game against Saegertown at the Davis Street Field, Friday, May 10, 2019. The Panthers topped the Eagles, 18-3, in five innings.

Jason Beers drew a 1-out walk. With two away, Dominick Walton and Alex Kemery hit consecutive singles. Beers scored on Kemery’s hit to tie the game at 1-1.

The Panthers added another in the second.

Jaden Reagle beat out a slow roller to short with one away and moved to second on a wild pitch. Frank Leszek’s 2-out single scored Reagle to put the Panthers on top, 2-1. They wouldn’t trail or be tied again in the game.

Price was hit by a pitch to start the third inning and Caldwell followed with a single to put runners on the corners. Brandon Gaus’ sacrifice fly to right and Josh Weaver’s RBI single put Saegertown ahead, 4-1.

Youngsville answered right back in the bottom of the inning.

Nyko Mercado led off with a single and advanced to second on an error. Beers reach on an error and Gaus’ throw from short went out of play, allowing Mercado to score and Beers to go to second. Beers advanced to third on Sam Hoover’s ground out and scored on a wild pitch to get the Eagles back within one at 4-3.

The top of the fourth inning started ominously for Youngsville

Mercado looked to have Leszek’s fly ball lined up for an out, but the speedy left fielder overran it by a step and couldn’t recover. The ball bounced off Mercado’s glove and Leszek was able to make it to second on the play. Dawson Bartholomew singled to left to bring in Leszek. Sherry tripled in Bartholomew and scored on an errant pickoff attempt.

Price, Caldwell and Gaus all hit consectutive singles. Caldwell’s hit brought in Price and he and Gaus advanced a base on Weaver’s ground out to second. Caldwell scored when Reagle reached on an error. Dylan Flinchbaugh hit a popup to shallow right that fell between a trio of Eagles and Gaus raced in on the play.

Leszek hit a short popup that fell between the pitcher’s mound and shortstop and died in the wet grass. Bartholomew’s bases loaded single scored Reagle and Flinchbaugh both came in on the hit to put Saegertown ahead 12-3. Leszek and Bartholomew scored when Sherry reached on an error and Price’s single put runners at first and second.

Caldwell singled home Sherry and both runners moved up a base on Gaus’ groundout. Weaver followed with a monster shot to right.

The ball hit the right field fence and Weaver raced to third for a 2-run triple and a 17-3 advantage. Reagle flied out to right to end the inning.

Flinchbaugh hit a leadoff double to start the fifth and scored on Sherry’s sac fly to center.

Price and Bartholomew combined to limit the Eagles to just three hits over five innings.

Beers scored twice and Kemery had a run driven in.