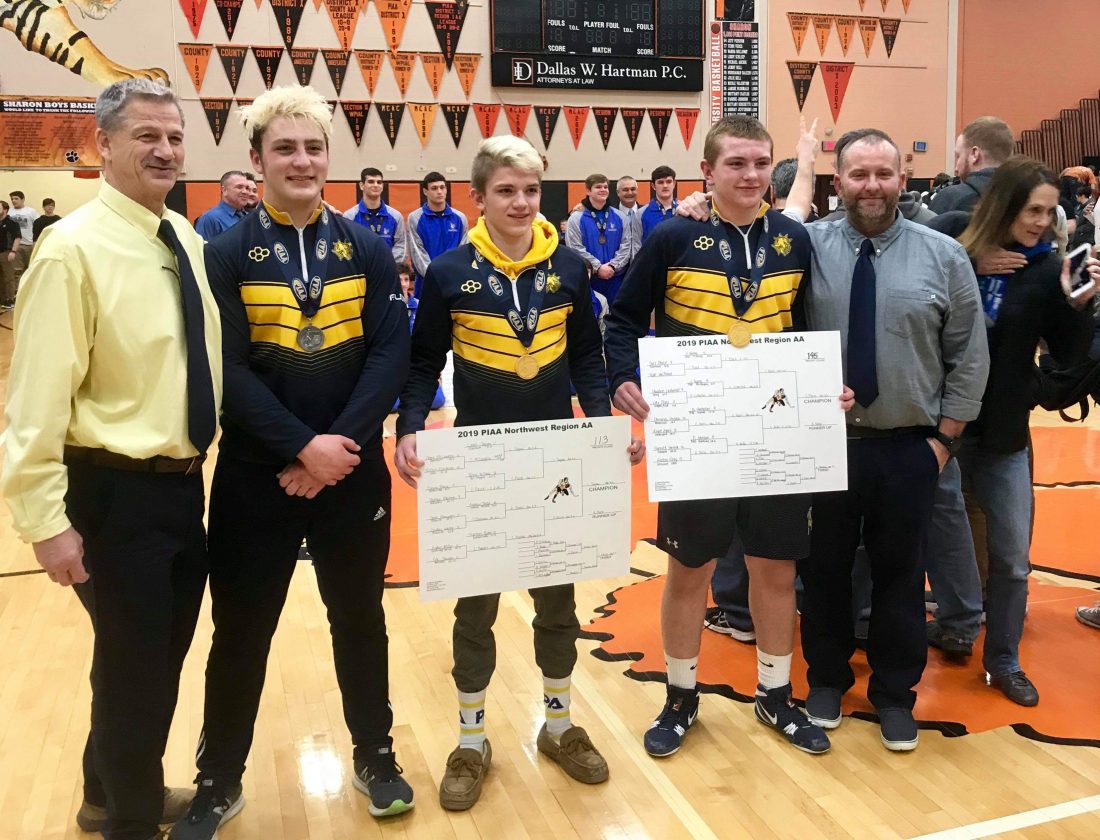 Eisenhower wrestlers and coaches stand together following a historic performance at the Northwest Regional.

HERSHEY, Pa. – It was a tough finish to the season for a special quartet of Warren County wrestlers at the PIAA wrestling championships on Friday.

Jaquay, at 113 and Bauer, at 220 both won their first-round matches on Thursday to advance to the quarterfinals.

Jaquay, a junior, was locked in a tight battle with Southern Columbia’s Kole Biscoe in the quarterfinals. With the score tied 2-2 in the third period, Jaquay nearly earned an escape point in the final moments that would have sent him to the semifinals.

Instead, the match went to overtime (sudden victory), where Biscoe was able to earn a 7-2 triumph. Biscoe went on to advance to Saturday’s title match. 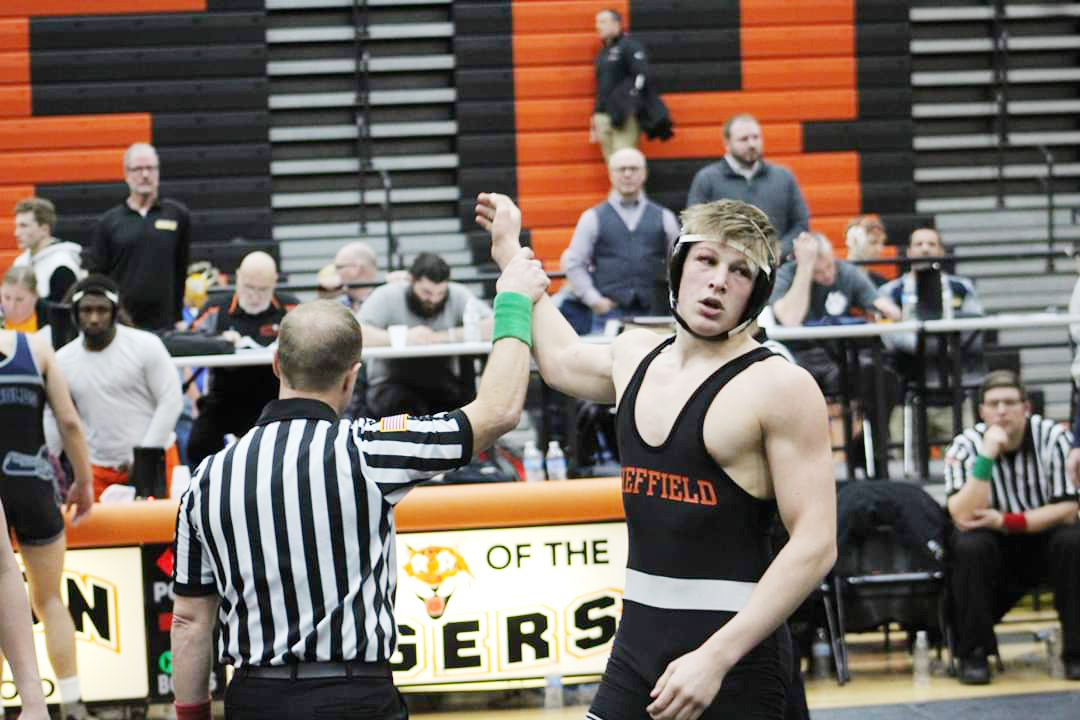 Sheffield sophomore Ethan Finch gets his hand raised after a victory at the Northwest Regional at Sharon High School.

Jaquay dropped down to the consolations, where he met up with Adam Jacob of East Pennsboro, with the winner guaranteed a trip to the medal stand. Again, it was another close match, and again, Jaquay came up just short, 3-1.

Nevertheless it was another banner season for Jaquay (35-5), who picked up his 100th win on Thursday and won a D-10 and Northwest Region title.

His teammate, Bauer, had a similar path.

Bauer, who finishes his senior season with a record of 31-9, went up against Montoursville’s Cameron Wood, who picked up his 40th win of the season the day before in the first-round.

It was Wood who came up with an 8-5 decision, dropping Bauer to the consolations, where he lost a 10-1 major decision to another wrestler who picked up his 40th win a day earlier, Glendale’s Cory Johnston.

For the senior Bauer, the trip to states capped a terrific high school career.

Finch, after losing in the first round, nearly completed the very difficult task of bouncing back and winning three matches in a row to get on the podium.

He came back yesterday with a 6-4 decision over Tamaqua’s Nate Wickersham to keep his season alive.

Finch (31-11) got his day started on Friday with another close victory, a 1-0 decision over Muncy’s Ethan Gush. That put him one win away from a state medal, going against Kutztown senior and South East Region runner-up Tyler Fisher.

Finch and Fisher wrestled a tight match, with Fisher ultimately coming out on top, 3-2.

Still, however, a pair of wins at states (at a weight class where upperclassmen typically dominate) on the heels of a second-place finish at regionals, as well as a District 9 title leaves no doubt that great things are still to come for the talented Wolverine.

It was a tough day for Eisenhower freshman Cael Black, who, after dropping a 3-2 decision in the first round on Thursday, was tech falled in the second period by North Star senior Hunter Tremain in his first consolation match.

Tremain, a Pitt-Johnstown recruit who is ranked third in the state at 195 by PA Power Wrestling, went on to win his next match (his 40th of the season) via first-period pin over Conneaut’s Austin Kelly, who Black beat for the Northwest Region title.

Black left Hershey without a victory, but that will put no damper on what was a phenomenal freshman season that saw him break the Eisenhower freshman record, winning a regional title and advancing to states in a weight class dominated by juniors and seniors.