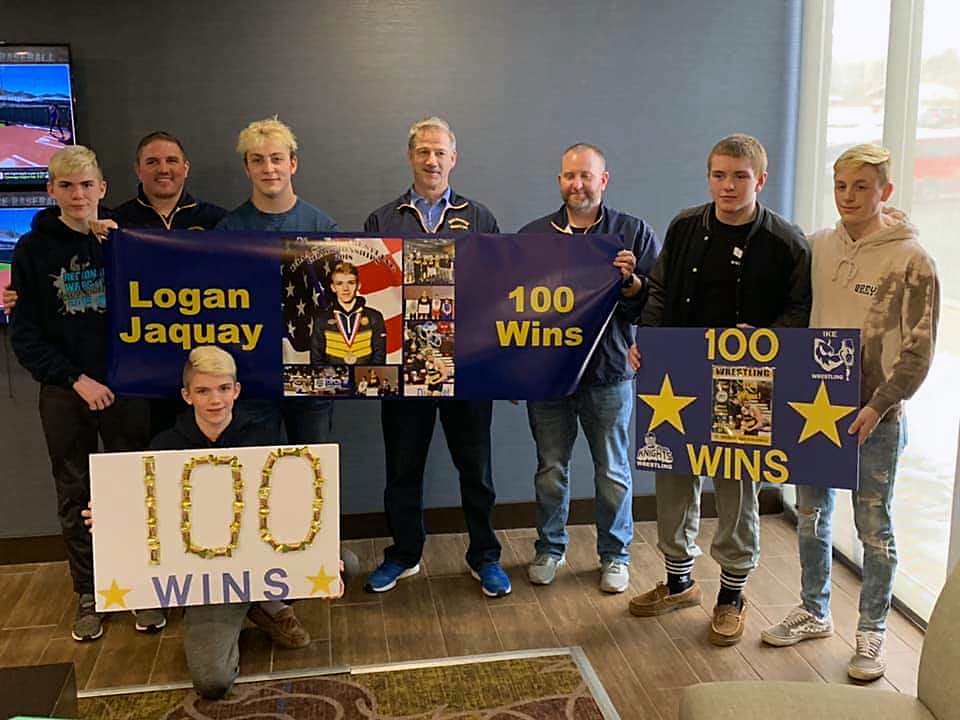 Photo submitted to the Times Observer Eisenhower wrestlers and coaches celebrate Logan Jaquay’s 100th career win in the hotel following the first day of the PIAA AA State Wrestling Tournament in Hershey, Thursday, March 7, 2019. Jaquay, a junior, got the win via pinfall in the first round of the tournament. A state medalist as a sophomore, Jaquay will enter his senior season with his sights set on both the Knights career wins record (117) and the Warren County record (135).

HERSHEY, Pa. – It was a solid first day at the PIAA AA State Wrestling Tournament for Warren County grapplers.

All four competitors, Eisenhower’s Logan Jaquay (113), Cael Black (195) and Joey Bauer (220) and Sheffield’s Ethan Finch (170) all survived to see action on Day 2. Jaquay and Bauer are in the championship quarterfinals, while Black and Finch are in the second round of the consolation bracket.

“We had great day,” Eisenhower coach Kris Black said. “We really could’ve been three for three today. But, tomorrow’s a new day, those guys (Jaquay and Bauer) have to win one, Cael’s got to win two (to medal). Anything can happen down here.”

Jaquay got the day started for Warren County with a second period pinfall victory over Tyrone’s Hunter Walk (So. 30-12). In addition to putting Jaquay into the quarterfinals, the win was also the junior’s 100th career victory. With his senior season still to go, Jaquay has a great chance to capture the Knights career wins record (Travis Hummel, 117 wins) and could challenge the Warren County record (Warren’s DJ Fehlman, 135 wins).

“That’s big milestone for him as a junior,” Black said. “That’s a big deal. He looked really good, really sharp today. He was on his game, looked good on his feet. He was primed and ready to go.” 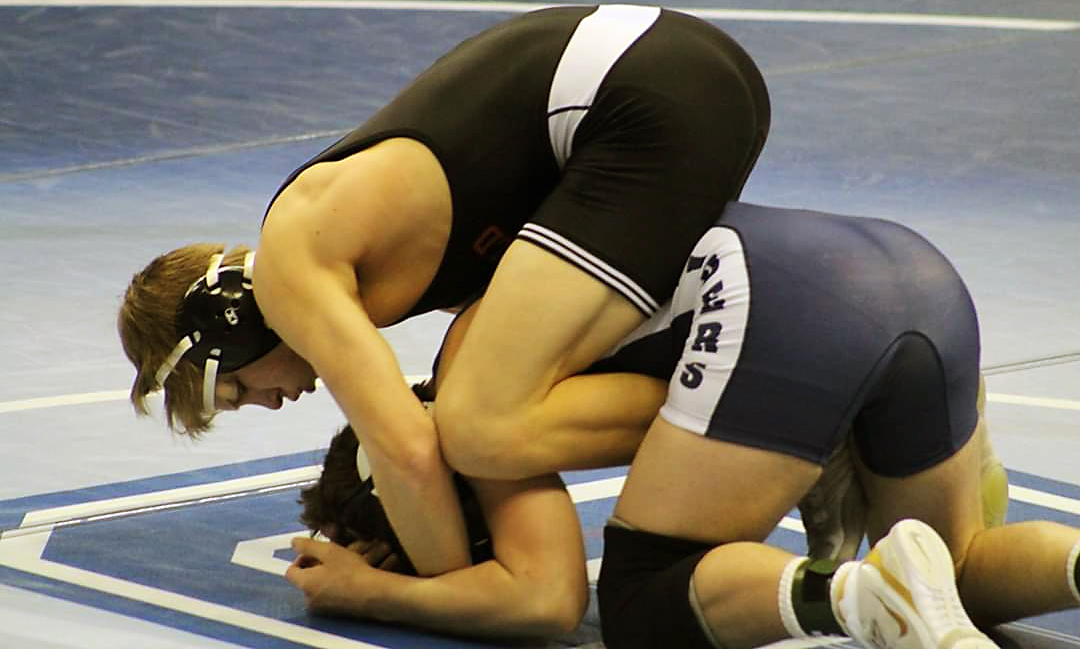 Photo courtesy Jared Finch Sheffield’s Ethan Finch looks to pull Tamaqua’s Nate Wickersham to his back in their consolation first round match at 170 pounds during the PIAA AA State Wrestling Tournament at the Giant Center in Hershey, Pa., Thursday, March 7, 2019. Finch, after trailing 4-0, came back to pin Wickersham in overtime to advance to the consolation second round. He takes the mat today needing two more wins to reach the medal stand.

Finch had a tough first round draw, matching up with Penn Cambria senior Derek Brown (34-4). Brown picked up a first period pin to move on to the quarterfinals and send Finch to the first round of the consolation bracket. Finch faced Tamaqua’s Nate Wickersham (So., 36-13) with the season on the line. Wickersham jumped out to an early 4-0 lead, but Finch battled back to tie the match at 4-4 and force overtime. Just 13 seconds into the overtime period, Finch put Wickersham on his back and decked him to advance to the second consolation round.

Black met up with Bentworth senior Jonathan Vargo (27-6), who advanced via forfeit in the preliminaries, in the first round. They were scoreless through the first period, then Black, who chose to start the second on bottom, got an escape point. Vargo grabbed a takedown, but Black escaped again to take a 2-2 tie into the third. Vargo started on bottom and quickly escaped. Black, who was trailing 3-2, wasn’t aggressively going for a takedown through the third period as he thought the official had awarded him a stalling point and the score was 3-3.

“There was some confusion about a possible stall call,” coach Black said. “But it was just a mistake. You can’t be content at this level, you’ve got to try to score.”

Vargo, who finished fifth in the state a year ago, held on for the 3-2 win to advance to the quarterfinals while Black dropped to the consolation bracket.

“When the ref blew the whistle, Cael thought it was going to overtime,” coach Black said. “But then the ref raised the other kid’s hand. That kid is a solid kid, but that was a winnable match for us. He probably should’ve won that match.”

Bauer drew Salisbury Township’s Jonah Niesenbaum (Sr., 31-7) in the first round. The senior Knight wasted little time securing his berth in the quarterfinals as he decked Niesenbaum in 1:16.

“Joey was Joey today,” Black said. “He just finds a way to get it done. He finds a way to win and come out on top in situations most aren’t able to do. He’s really enjoying the moment, and he should. He knows it’s his last hurrah. He’s right where he needs to be right now.”

Jaquay will face Southern Columbia’s Kole Biscoe (Fr., 44-6), a 5-2 winner over Allentown Central Catholic’s David Kreidler (So. 31-4), in the quarterfinals. Finch meets Muncy’s Ethan Gush (So., 37-15) in the consolation second round. Gush topped Northern Bedford’s Austin Mowry (Sr., 29-8) in the prelims before falling to Littlestown senior Carl Harris (24-2) in the first round. Black has a consolation second round matchup with North Star senior Hunter Tremain (39-5). Tremain was pinned by Saucon Valley’s Dane Csencsits (Jr., 37-8) in the first round before pinning Hamburg’s Ben Weidenhammer (Sr., 33-13) in the consolation first round. Bauer has a quarterfinal contest with Montoursville’s Cameron Wood (Jr., 40-4) the Northeast Region champion. Wood picked up a 12-2 major over Bishop McDevitt’s Tyrone Fowler (Jr., 22-4) in the first round.

“If Logan wrestles his game and does what he does, he should be in good shape,” Black said. “Joey’s match could go either way, but he’s wrestling really strong right now. He’s got to win one of two to get on the medal stand, but he’s pretty pumped to win that (quarterfinal) match to get into the top six.

“Cael’s kid was in control and got flipped late and pinned,” he continued. “It’s going to be a tough match. But I think this is a great learning experience for Logan and Cael both.”