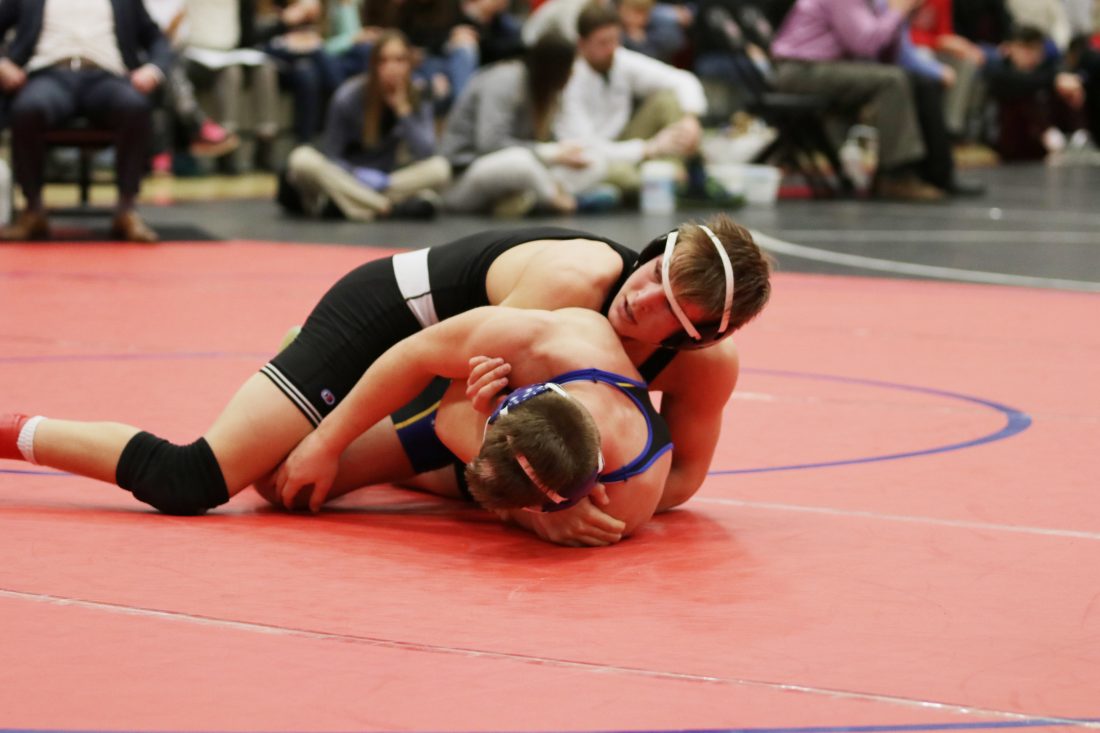 Photo by Jared Bakaysa Sheffield’s Ethan Finch (top) battles Johnsonburg’s Tyler Watts during their 170-pound title bout at the District 9 Championships at Clearfield High School, Saturday, Feb. 23, 2019. Finch won the title and now heads to Sharon, along with teammate Nick Knowles, for the PIAA Class 2A Northwest Regional Tournament today. The top four wrestlers in each weight class will advance to the state tournament in Hershey next weekend.

Nine Warren County wrestlers will travel to Sharon High School today to compete in the Class 2A Nortwest Regional Tournament.

On the line is a trip to the PIAA State Tournament in Hershey next Thursday-Saturday. The top four in each weight class will move on.

Six of the grapplers represent Eisenhower, and for two of them this is their second straight trip to regionals. Logan Jaquay (113) finished third in Sharon a year ago before winning a state medal in Hershey. The junior comes into the tournament this year as the District 10 champion and just four wins shy of 100 for his career. Senior Joey Bauer (220) is also making his second trip to regionals. A 6-seed in 2018, Bauer comes in as the D-10 2-seed this season. Joining them are freshman Gannon Jaquay (132), junior Josh Bortz (138), senior Alex Barnett (160) and freshman Cael Black (195).

A pair of Sheffield wrestlers, sophomore Ethan Finch (170) and senior Nick Knowles (285), are making their first trips to regionals. The duo is the first pair of Wolverines to advance this far since Doug Grubbs and Brian Fries in competed in 2014, and the first Sheffield representatives of any kind since Terrel Williams in 2015. Both will be looking to do something only five previous Wolverines have done, advance to states. Finch may have history on his side as he became just the third district champion in Sheffield history when he captured the District 9 title last weekend. Knowles finished third in the district.

Youngsville’s Jake DeSimone (285) is also making his first trip to the regional tournament. DiSimone finished seventh at the district tournament and is the second consecutive Eagles heavyweight to make it to regionals, following Mason Bemjamin in 2018. 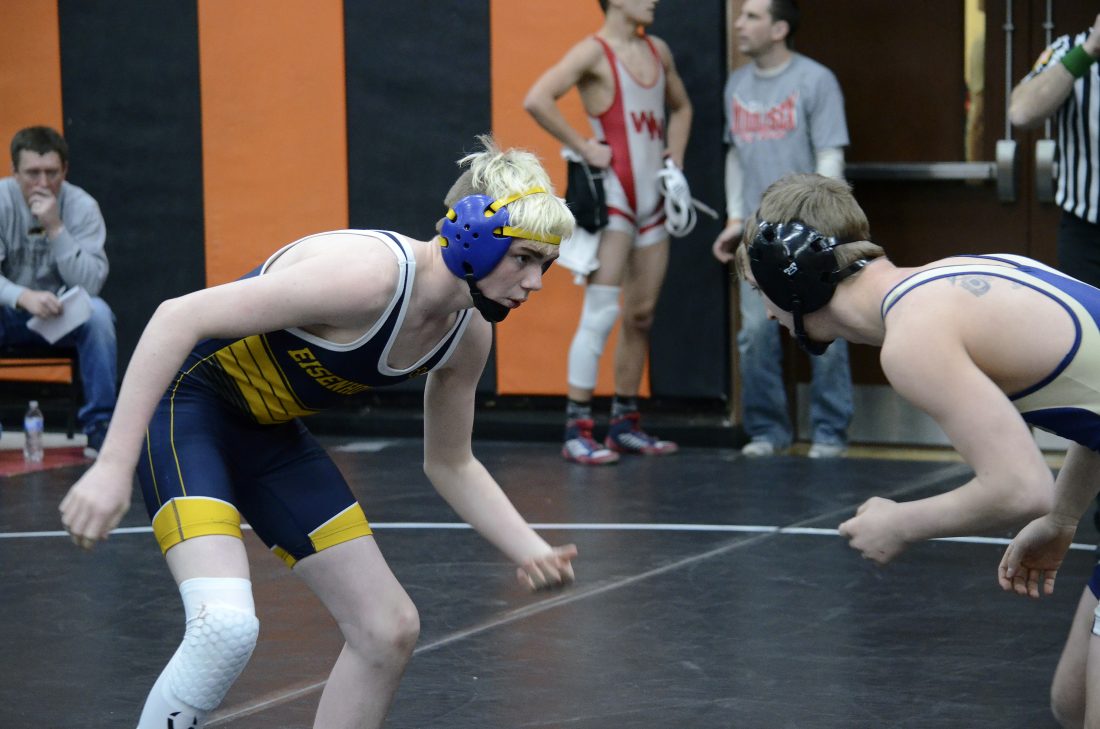 Times Observer photo by Brian Hagberg Eisenhower’s Gannon Jaquay sizes up his opponent during the District 10 Tournament in Sharon, Feb. 22, 2019. Jaquay and five of his teammates return to Sharon today for the PIAA Class 2A Northwest Regional Tournament with an eye on qualifying for states.

A breakdown of each competitor’s weight class follows

Jaquay has a bye into the quarterfinals where he’ll face the winner of Jamestown’s Chase McLaughlin (28-3) and Kane’s Dillon Illerbrun (18-12). Interestingly, General McLane’s Andrew Brest (33-5) is on the opposite end of the bracket. If each win out they could meet for a region title after splitting the section and district title matches. Redbank Valley’s Trenten Rupp (21-8) is the 2-seed.

Jaquay faces General McLane’s Matt Leehan (32-13) in the first round, the winner takes on Wiant in the quarterfinals. Cambridge Springs’ Tye Varndell (36-0) is the 2-seed.

Bortz takes on Fort LeBoeuf’s Joel Huck (28-14) in the first round with the winner to meet Kane’s Noah Blankenship (26-6) the 2-seed. It will be the third meeting this season between Bortz and Huck. Huck has taken the first two contests by a 10-2 major and 7-3 decision.

Black will tangle with Clarion’s Tyler Van Tassel (6-3) in the first round with the winner to meet Harvey in the quarterfinals. If Black advances, it will be the fourth time he’s met up with Harvey this season. To date, the senior Rocket has had the freshman Knights number having won all three previous matches. But all three were decision victories, 7-3 in the Tool City Tournament semifinals, 7-4 in the D-10 team dual championships and 3-1 in the D-10 semifinals.

One of Knowles or DeSimone will have to get through the consolation bracket if they want to advance to Hershey as they will face each other in the first round. The winner gets Union City’s Matt Long (32-5). Brookville’s Colby Whitehill (32-0) is the 2-seed.