After long layoff, Tidioute set to battle Commodore Perry for berth in D-10 1A title game 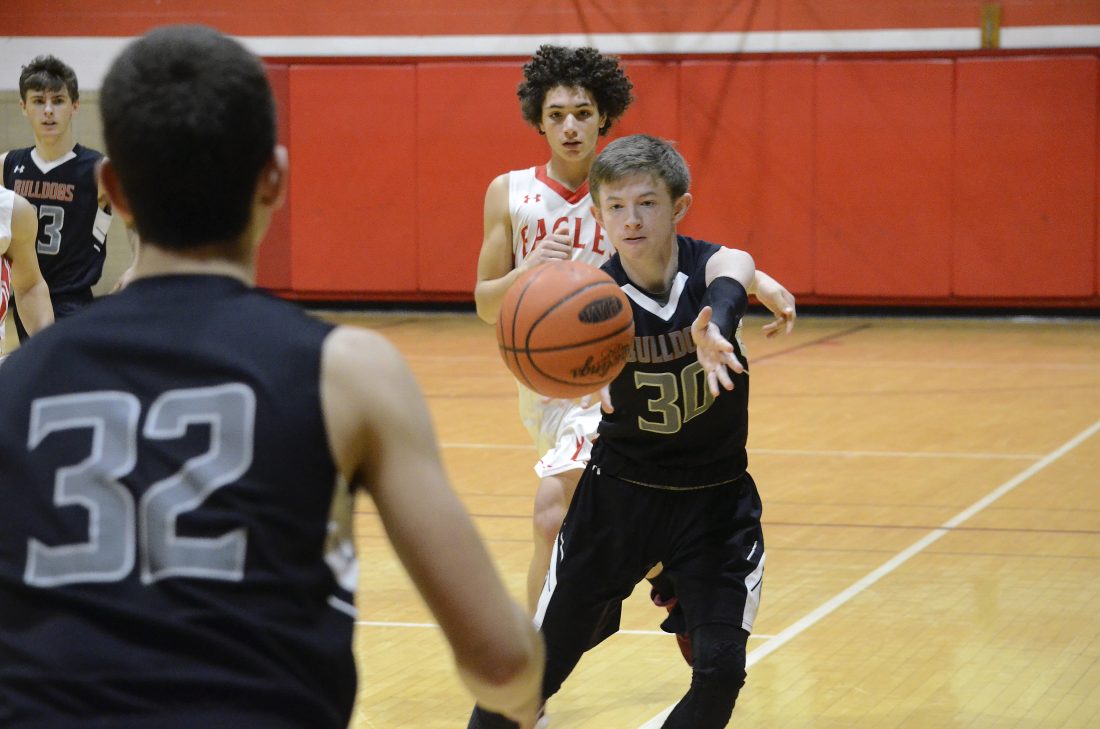 In this Jan. 5, 2019 photo, Tidioute’s Ryan Williams makes a pass to teammate Jared Veasey (32). Williams, Veasey and the Bulldogs travel to Edinboro University for a 5 p.m. tip-off against Commodore Perry in the District 10 Class 1A semifinals.

The game marks the Bulldogs’ first appearance in a D-10 postseason game since the school reopened as a charter in 2005. TCCS opted to join District 10 play this year and the results have been very positive so far.

TCCS finished with a 13-8 overall record and went 2-2 in Region 1 to finish second in the region. Included in those 13 wins are victories over county foes Eisenhower (twice) and Sheffield, District 9’s Austin (12-11) and perennial D-10 postseason competitor Maplewood.

The Bulldogs also grabbed a pair of wins over their semifinal opponent, Commodore Perry. They defeated the Panthers 40-34 in Tidioute and 44-40 at CP. Unsurprisingly, it was senior Jared Veasey who led the way in both wins. The Bulldogs’ leading scorer this season (17.7 ppg) poured in 22 in the first meeting and another 12 more in the second as the Bulldogs had a more balanced scoring effort.

If the ball isn’t in Veasey’s hands, fellow seniors Patrick Shields (9.8 ppg) and Ryan Williams (8.0 ppg) are likely connecting from beyond the 3-point line. Williams led the Bulldogs in 3-pointers, connecting on 51 throughout the year. Shields wasn’t far behind as he buried 45 of his own. Junior Maison Deloe has come on strong late in the year bumping his scoring average to nearly six points per game and providing another presence on the glass for TCCS.

Commodore Perry is a balanced scoring team, led by senior Jared Mink at 12.2 ppg. Junior Hunter Artman (8.0) and senior Nathan Stringert (7.5) provide most of the secondary scoring for the Panthers. Senior Keane Cropp and Stringert are the most prolific deep threats, hitting 23 and 22 3-pointers on the year, respectively.

Despite their 5-17 record, the Panthers will be a tough out. CP limited teams defensively, surrendering just 53 points per game and only giving up 60 or more six times in 22 games.

TCCS could have a slight advantage. The Bulldogs played their final regular season game against General McLane at Edinboro’s McComb Fieldhouse so they’ve had a chance to play on that floor just over a week ago.

Region 1 champion Jamestown awaits the winner in the D-10 Class 1A title game. The Muskies beat the Panthers three times this season and swept both meetings with TCCS.