Dunham back from injury, Sheffield picks up first win 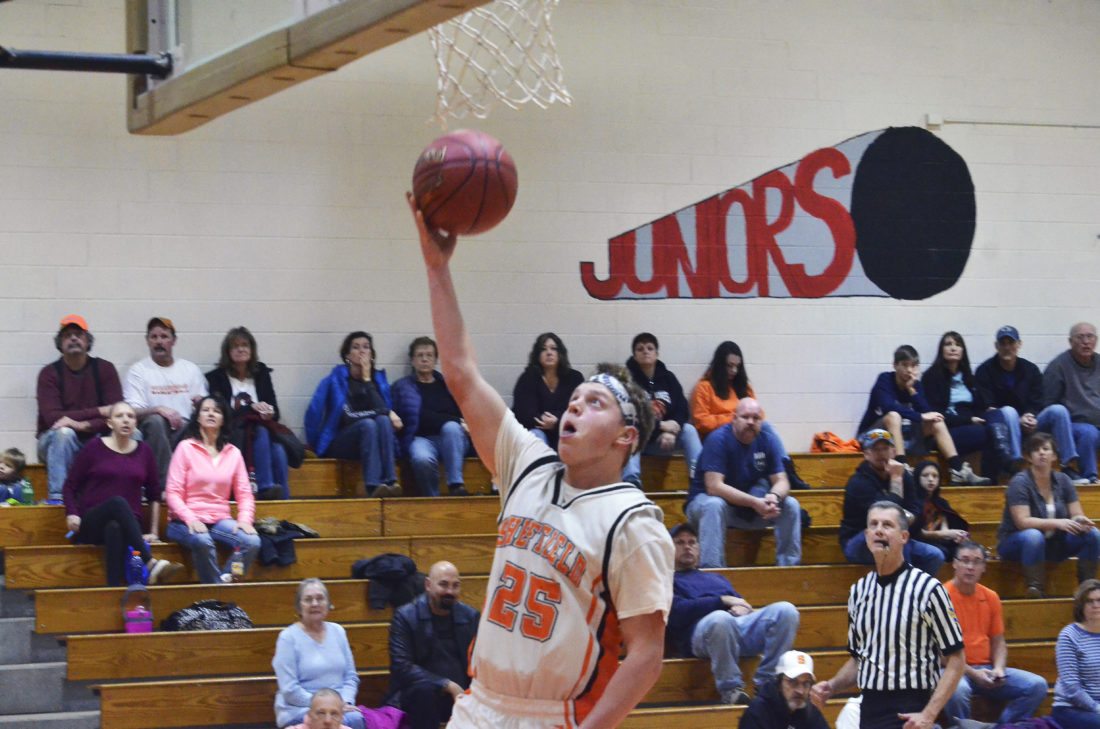 Sheffield’s Matt Dunham puts in a layup against Jamestown during the consolation game of the 2017 Sheffield Tip-Off Tournament at Sheffield High School, Saturday, Dec. 9, 2017. Dunham’s 15 points weren’t enough as the Wolverines fell to the Muskies, 52-43.

A quick glance at the box score from Saturday’s game between Oswayo Valley and Sheffield might not seem overly compelling at first.

But a closer look reveals a pair of firsts for the Wolverines. The most obvious is Sheffield picking up its first win of the season, 80-45. The second may not be as noticeable, but may, in fact, be more important.

Senior Matt Dunham scored six points. Not a huge total, but it marked the first time Dunham was an active participant in any contest for the Wolverines since exiting Sheffield’s football season opener Aug. 26 with a severe leg injury.

“The big thing that really pumped them up was Matt Dunham’s first game action,” Sheffield coach Mike Knapp said. “It’s not been easy for him, it’s been a lot of work. But he got in for a few minutes, scored six points and got the crowd going.”

While the senior picked up all six of his points in the second half, it was the underclassmen who got the Wolverines (1-9) rolling early. Sophomore Tyler Hepinger scored 11 of his career-high 33 points in the first quarter and freshman Tony Richards added nine more as the Wolverines got out to a 24-10 lead.

“We came out of the gate hot,” Knapp said. “Tony and Tyler knocked down a couple of 3s and got us going.”

Dunham hit his first field goal of the season in the third quarter and Hepinger hit three more, in addition to going 5-6 from the line as Sheffield methodically began pulling away.

“In the second half we really worked more on executing our offensive set and playing better defense,” Knapp said.

The Wolverines finished even stronger than they started. Seven different players scored and Sheffield poured in 26 points in the period to close out the win.

“It was nice to finally get a win,” Knapp said. “These are a bunch of young guys and they were getting down. We just kept preaching patience.”

In addition to Hepinger’s big game, Jake Vinopal had a double-double with 10 points and 12 rebounds, he also dished out seven assists.

“Jake had a nice game,” Knapp said. “Jake wants to be good, is hungry to be good. We work on rebounding a significant amount. This was solid for him.”

Richards finished with 12 points for the Wolverines.

Sheffield will have little time to savor the victory as the Wolverines welcome cross county rival Tidioute Charter tonight. TCCS is coming off a tough 48-43 loss to Saegertown Saturday and the Bulldogs will be looking to get back in the win column against the Wolverines.

“Our kids know them well,” Knapp said. “They played in the spring together during travel ball. It’s going to be a tough matchup. It should be interesting to see.”

Sloppy play in the second quarter doomed Tidioute Charter in a 48-43 loss to Saegertown Saturday.

The Bulldogs were up 16-10 after the first, but the Panthers capitalized on five turnovers to take a 28-23 lead into the half en route to the win.

“We just didn’t play well start-to-finish, offensively or defensively,” TCCS coach Terry Cotterman said. “We had a few turnovers in the second quarter. We got a little sloppy with the ball and tried to rush things.”

Cotterman knows his team missed a golden opportunity to have seven wins through 10 games.

“If we play the way we’re capable of, we should win this one,” he said. “It’s puzzling. We definitely let one slip away.”

Jared Veasey had a double-double for the Bulldogs (6-4) with 12 points and 10 rebounds. Ryan Williams had a team-high 13 points, Patrick Shields had eight points, nine rebounds and four assits and Mason DeLoe had seven points and eight rebounds in the loss.

The Bulldogs will try to regroup quickly as they travel to cross-county rival Sheffield tonight.

“The kids just have moments sometimes, and Saturday was one of those moments,” Cotterman said. “We’ll work on it. They were disappointed and they’ll bounce back.”