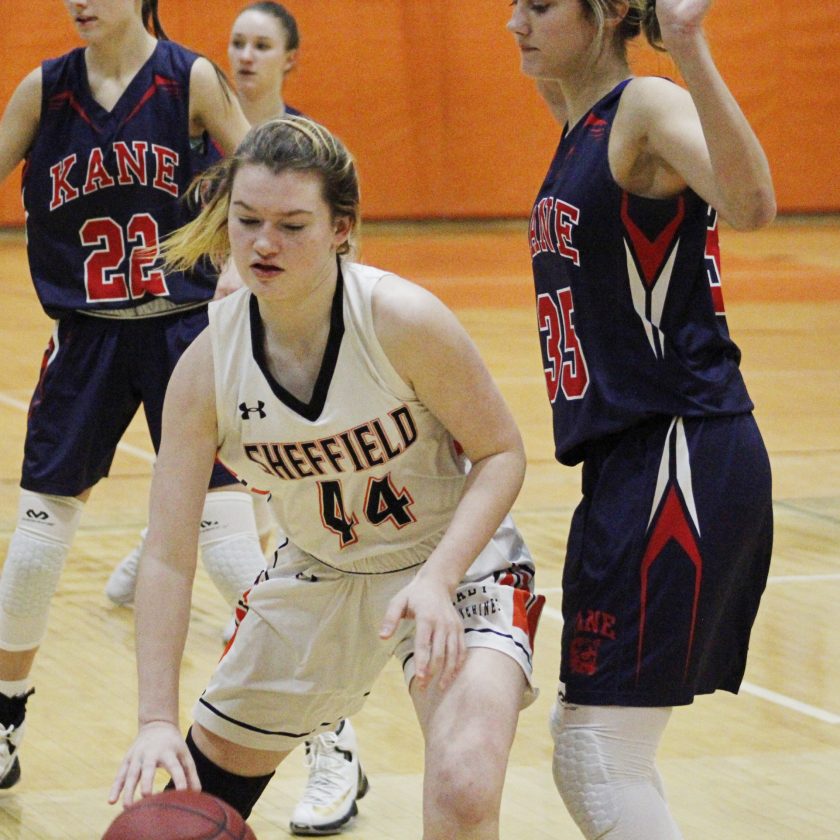 FRANKLIN, Pa. – Sheffield girls basketball coach Brandon Troutman has been stressing to his team that it takes playing four quarters of basketball to win games, and being on the wrong side of a 21-4 third quarter Saturday afternoon in Rocky Grove did the Lady Wolverines in, falling 40-20 to the Lady Orioles in non-conference play.

“The girls defensive effort saved the game from getting away from us in the second quarter. We held them to a single free throw, which helped combat our lack of offense. Alyssa (Dunham) got into foul trouble but Halle (McLaughlin) stepped in an gave us some nice minutes in her place,” Troutman said.

The Lady Wolverines were able to give Rocky Grove some fits in the second and early third quarter with some pressure trapping, but eventually in the third quarter, Sheffield was careless with the ball and found themselves in foul trouble.

“We had 12 turnovers in the third quarter, unforced turnovers. Having such a young team, and one that’s struggling to find the rim, taking care of the ball is a must. Going on the road and keeping our composure when things get tough is something we’ll continue to work on, players and coaches alike,” Troutman said, “and our foul situation wasn’t ideal. Four of our five starters saw their fourth fouls tallied in the book during the third, and subsequently saw some time on the bench. I wasn’t overly happy with the situation, but with totals of 38 turnovers and a 50 percent effort from the foul line it all falls squarely on our shoulders.”

Emily Leichtenberger gave Sheffield a solid effort in the post, scoring eight points and pulling down nine rebounds. “She earned every tally, every trip to the line, and had some ‘E for Effort’ points that a coach recognizes but won’t show up in the book. Alyssa too for that matter,” Troutman noted.

In JV play, Sheffield kept things close each quarter, but the difference of two and three point deficits in each quarter added up in the end, falling 33-22. Annabel Sheldon lead Sheffield with 10 points and seven rebounds, Kaylee Grubbs coming up just short of a double-double, adding nine points and nine rebounds.

Sheffield is now 2-14, 0-6 in the AML, and travels to Tidioute for a non-league, county clash with the Lady Bulldogs Tuesday evening.