Wolverines hit the road to Union/ACV 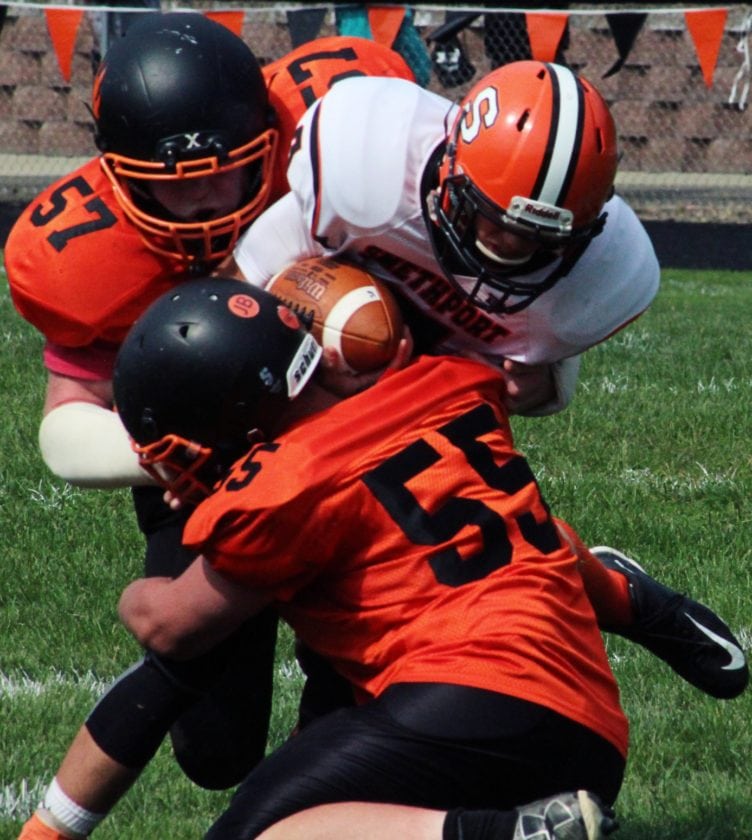 Smethport’s Braedon Johnson is brought down by Sheffield’s Wesley Atwell (57) and Eugene Engesser (55).

With everything that happened from the final minutes of the final game from the 2017 season right up to the opening kickoff of the 2018 campaign, Sheffield wanted to prove to the world it was going to be a different program moving forward.

If the Wolverines are going to change the outside perception of the team, they will need to start this week at Union/AC Valley after coming up on the short end of a 54-6 decision to Smethport.

“It’s all about the family concept,” first year Sheffield head coach Chris Korbar said after last week’s game. “There is no more I in team, it is we. We are a team. We are a family. They lost a little bit early on, but they were able to reel it back into what we’ve been teaching throughout camp. It’s all on these kids right now.”

Part of that family, senior quarterback and linebacker Matt Dunham, was lost for the year early in the game with a severe leg injury. Steve Lojewski took over as the signal caller and went 1-5 for six yards in the loss. Kevin Marfink paced the Wolverine ground attack with nine carries for 52 yards and a touchdown.

Korbar said Marfink and Tyler Ordiway (11 carries, 35 yards) will be looked on to carry the offense in the wake of Dunham’s injury.

The Falcon Knights, and first year coach Brad Dittman, got off to their own rough start as they were shutout by Clarion-Limestone, 40-0, in their season opener. U/ACV was held to just 64 yards of offense in the loss.

More than half of the Falcon Knights offense came from running back Tony Tompson (eight carries, 36 yards). Kyler Culberson added another 23 yards on the ground.