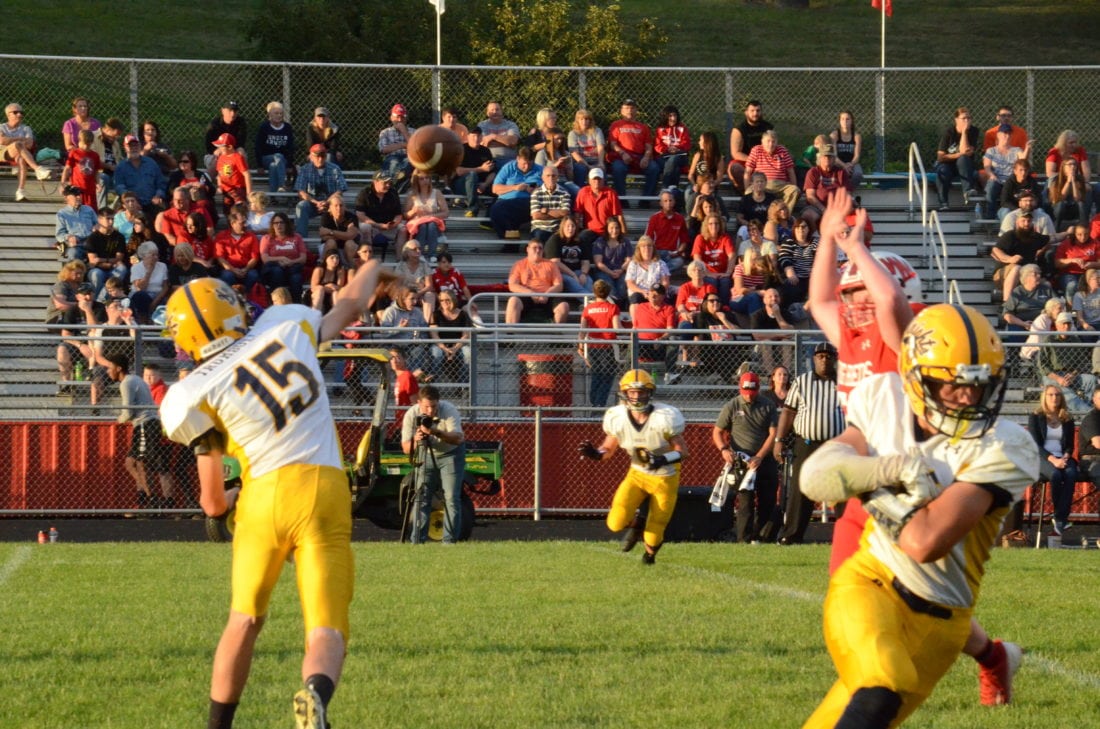 Eisenhower quarterback Owen Trumbull (15) throws to Zane Alexander (9) during the second quarter of their game against West Middlesex at Big Red Stadium, Friday, Aug. 24, 2018. A big second half gave the Big Reds a 27-2 win over the Knights in the 2018 season opener.

WEST MIDDLESEX, Pa. – Clayton Parrish’s two long touchdown runs in the second half turned a 5-point halftime lead into a blowout as West Middlesex rolled to a 27-2 season-opening win over visiting Eisenhower Friday.

Parrish broke the game open in the third quarter with a 34-yard scamper just one play after the Knights (0-1) attempted a fake punt. The senior capped off the scoring late in the fourth with a 40-yard run.

The Big Reds (1-0) held a slim 7-2 advantage at the half, but started running an option play in the second half to get the ball away from Eisenhower’s strong front 7.

Junior corner Jason Davis excited the home crowd just three plays into the game when he picked off Owen Trumbull’s third down pass and raced 50 yards for a touchdown with 10:35 to go in the first quarter. 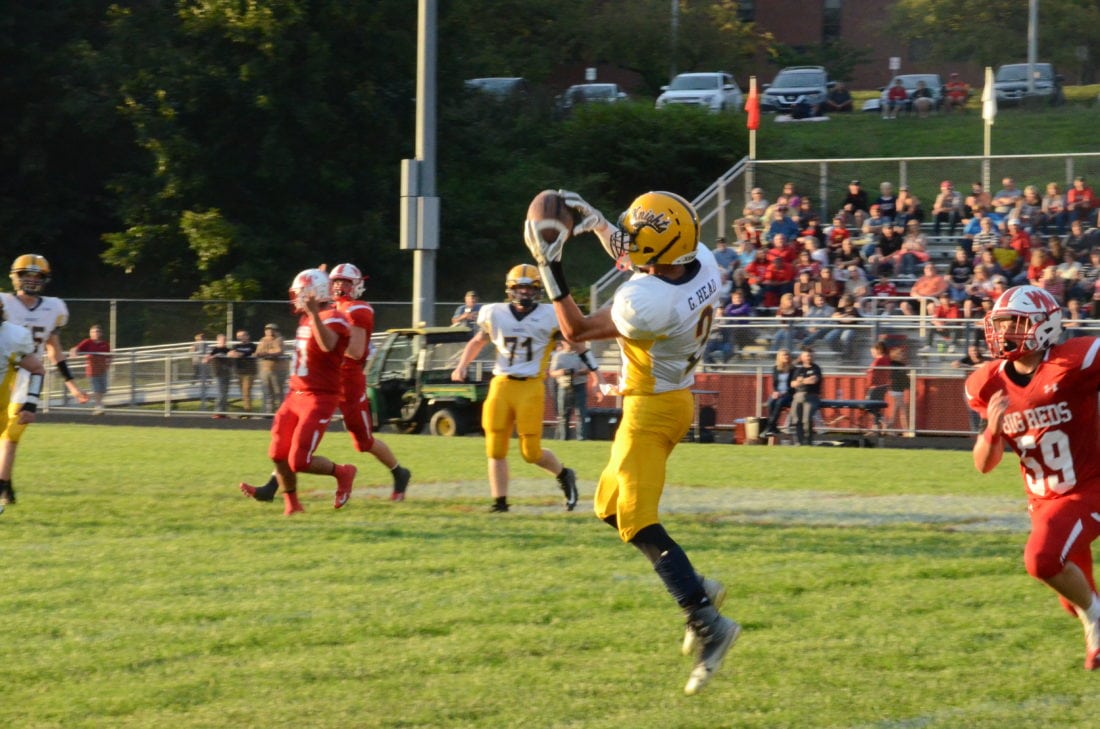 Eisenhower’s Garrett Head (2) catches a pass during the second quarter of a game against West Middlesex at Big Reds Stadium, Friday, Aug. 24, 2018. The Big Reds defeated the Knights, 27-2, in the season opener for both teams.

“That was huge for us,” West Middlesex coach Mark Means said. “One of our goals was to try to get a turnover and that gave us momentum.”

Following a three-and-out, the Big Reds looked like they were poised for their first offensive touchdown of the year, as they drove all the way to the Knights 14. A fumbled snap on first down ended the drive, but Parrish recovered a Garrett Head fumble on the next play to get the ball right back.

Three plays later, Middlesex had another fumbled exchange and the Knights pounced on it to go into the second quarter down 7-0.

Eisenhower put together its best possession of the evening, a 15-play drive that got them to the Middlesex 10. Trumbull’s fourth down pass to Head in the corner of the end zone was knocked away at the last second to preserve the 7-0 advantage.

“We had some missed opportunities,” Penley said.

An illegal procedure penalty on the ensuing possession back the Big Reds up to their own 5. When Jake Bowen dropped back to pass on third down, Joey Bauer tracked him down in the end zone for a sack and safety to put Eisenhower on the board with three minutes to go in the half.

Neither team was able to get much going to start the second halff-minus a pair of Parrish chunk runs-and they traded punts to start the third.

On Eisenhower’s second possession of the half, Penley opted for a fake punt attempt from the Knights 35. Head took the direct snap and found the edge, but came up short on the play. Parrish took the option toss on the next play and raced down the sideline for a 34-yard score. The Big Reds missed the extra point attempt and led 13-2 with 3:24 to go in the quarter.

“Their guys up front are tough and it was tough to run between the tackles,” Means said. “We wanted to attack the perimeter.”

Middlesex forced a three-and-out and put together a 9-play drive that ended with a Bowen keeper from 10 yards out and a 20-2 lead for the home team just two minutes into the fourth quarter.

Eisenhower tried to get things going through the air, but Trumbull was only able to connect on one of his passes in the final stanza.

A poor punt gave the Big Reds the ball on the Eisenhower 43 and two plays later, Parrish was off and running again. His second touchdown of the night went for 40 yards.

“That last TD, we just made a mistake (defensively),” Penley said.

Davis snagged his second interception of the night with 2:42 to go, sealing the win for the Big Reds.

Parrish finished with 18 carries for 153 yards and two touchdowns. While he was running free, the Big Reds shut down the Knights offense. They allowed just 86 total yards and forced three turnovers.

“I have no complaints about the effort,” Penley said. “That’s supposed to be one of the best 1A teams in District 10 and we played with that team until the end.”

Coming off a 2-9 season last year, West Middlesex has a chance to match its win total next week when the Big Reds welcome Lakeview (0-1) to Big Red Stadium.

The Knights, meanwhile, will head to the Pasture of Pain for their home opener against Union City (0-1). The Bears will present another physical matchup.

“They’re a physical, run team,” Penley said. “We just need to clean up our mistakes.”