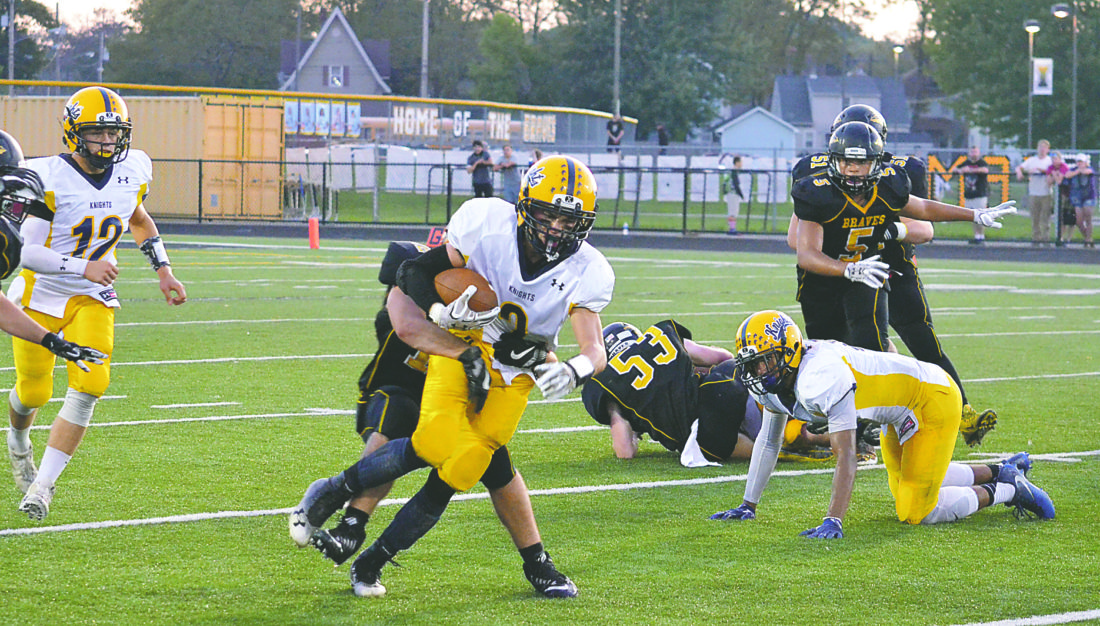 Garrett Head carries the rock during the first half of Eisenhower’s 34-7 road loss to Iroquois on Friday night.

Warren County football teams will get their first opportunity to see how they measure up against an outside opponent today with all three teams traveling for a preseason scrimmage.

While certainly focused on the task at hand in Punxsutawney, the Dragons will definitely have a vested interest in what the Knights are up to as both the Lancers and Beavers are on Warren’s schedule this year.

Both Warren and Eisenhower have been participating in 7-on-7 events throughout the summer, but this will be the first full squad action for both teams.

“A quarterback can look good in 7-on-7, but how about when there’s chaos and a bunch of bodies flying at him,” Eisenhower coach Jim Penley said following a joint practice with Warren earlier this summer.

Evaluating quarterback play will be a big key for the Knights as Owen Trumbull is set to take over for the graduated Spencer Head. The sophomore saw limited action as a freshman, he played in five games and was 4-10 for 74 yards, but has been slinging it well in 7-on-7 play.

For Sheffield, this will be the first opportunity to get any kind of game action against an outside opponent. The Wolverines certainly haven’t lacked for excitement in the offseason. Longtime coach Dave Fitch resigned following the 2017 campaign and new head coach Chris Korbar officially took the reigns in April. The program was also under scrutiny as low turnout at offseason conditioning sessions raised questions about the viability of the team going forward.

Those issues behind them, the Wolverines are ready for the chance to see how they matchup, especially against the preseason favorite in the District 9 Large School division-Brookville.

The Dragons have only a few questions from a personnel standpoint, but they are in some key areas. The biggest question mark heading into the season is who will replace Seth Harrington at placekicker. Harrington was 9-10 on extra point attempts and 5-7 in field goal attempts with a long of 40 yards. Warren has tried multiple players at the position throughout camp, but none have been able to stick.

“It’s still up in the air, but we’re hoping to get it straightened out,” Warren coach Mark Morelli said at Warren’s Media Day Thursday.