Game On: Strong turnout paves the way for Wolverines to play in 2018 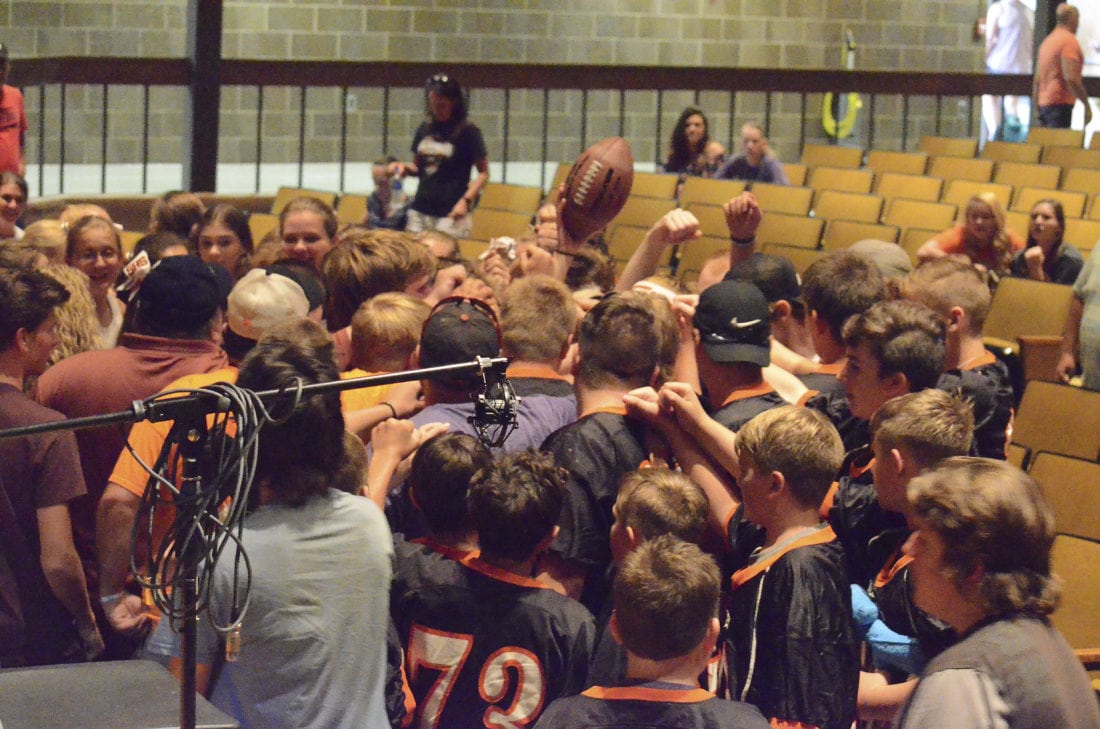 Sheffield football players and coaches, as well as some community members, huddle following a meeting with Warren County School District administrators in the Sheffield High School auditorium, Thursday, July 12, 2018. The district called the meeting to assess where they program is from a numbers perspective and if they would have enough players to field a team. Twenty-four varsity players (not including Abraxas) and another 18-20 junior high players attended the meeting.

When Sheffield football coach Chris Korbar interviewed for the position, he told Warren County School District Director of District-Wide Athletics Rick Gignac that he wanted “one year to prove it.”

Based on the showing the Wolverines had during their meeting with WCSD administrators Thursday, Korbar’s going to get his chance.

Twenty-four varsity players, and another 18-20 junior high, walked into the Sheffield High School auditorium to a raucous ovation from the approximately 75 community members in attendance. The varsity players were all Sheffield students, another 12 players are expected from Abraxas.

The meeting between Sheffield players/parents, cheerleaders and community members and WCSD administrators Amy Stewart, WCSD superintendent, Gary Weber, WCSD Director of Administrative Support Services, and Gignac was scheduled so the district could assess where the Wolverines were from a numbers perspective.

“We wanted to gauge where the program was at this point,” Weber said. “We’ve been watching the numbers and had some conversations with Abraxas and there were some concerns. Where are your numbers and where do you anticipate being when the season starts?

“Our intention is to try and support the program,” he continued. “We want to make sure you have what you need to be successful.”

Concerns were raised about the number of players attending offseason workouts, and when Sheffield opted not to take part in 7-on-7 events this summer the situation escalated. Korbar told the Times Observer in June that he opted not to participate, in part, because those contests aren’t conducive to the type of offense he wants to run.

“Where they’re (the district) coming from is fear of lack of numbers,” Korbar said Thursday. “Fear is driving the thought process that there aren’t enough kids to play.”

“We’re trying to be proactive and honest with you,” Stewart added. “If the numbers weren’t going to be there, we have one shot (to set up a co-op).”

While all three administrators said they were pleased to see the number of players in attendance, they also stressed how important it is that they all stay committed to playing this season.

“I love to see all your faces sitting here,” Stewart said. “If you’re not really intending to play, you need to be honest with yourself, your teammates and your coaches.”

Stewart said the district had a similar meeting with Youngsville prior to the start of the 2016 season.

Kids showed up and told district officials they were willing to play, but when the season started for real, many of them were no-shows. That led to Youngsville forfeiting a pair of games and ultimately losing its program.

That situation won’t happen again, primarily because the PIAA won’t allow it to.

“If you can’t field a team on a given day, they will not allow you to forfeit a game and come back,” Stewart said. “I beg you to be honest with yourselves and to each other. I want to make sure you have an opportunity to play.”

“Come the first Saturday (of the season), if the numbers aren’t there, you put the team in a precarious position,” Weber said. “You have to have numbers to maintain the team. We can’t proactively make adjustments mid-season, we’d have to shut it down (if there was a forfeit).”

A question was asked if the team had to forfeit, would those players who still wanted to play be able to join another team mid-season.

“That’s why we came when we did,” Weber responded. “It’s not to scare these guys or threaten anybody. We just want to be as candid as we can. You get one shot, we can’t co-op mid-season.”

One Wolverine player indicated there would be no concern about numbers.

“I want to make this 110 percent clear,” Isaac Filegar said. “There are 24 kids who are going to play. The kids that are here, want to play.”