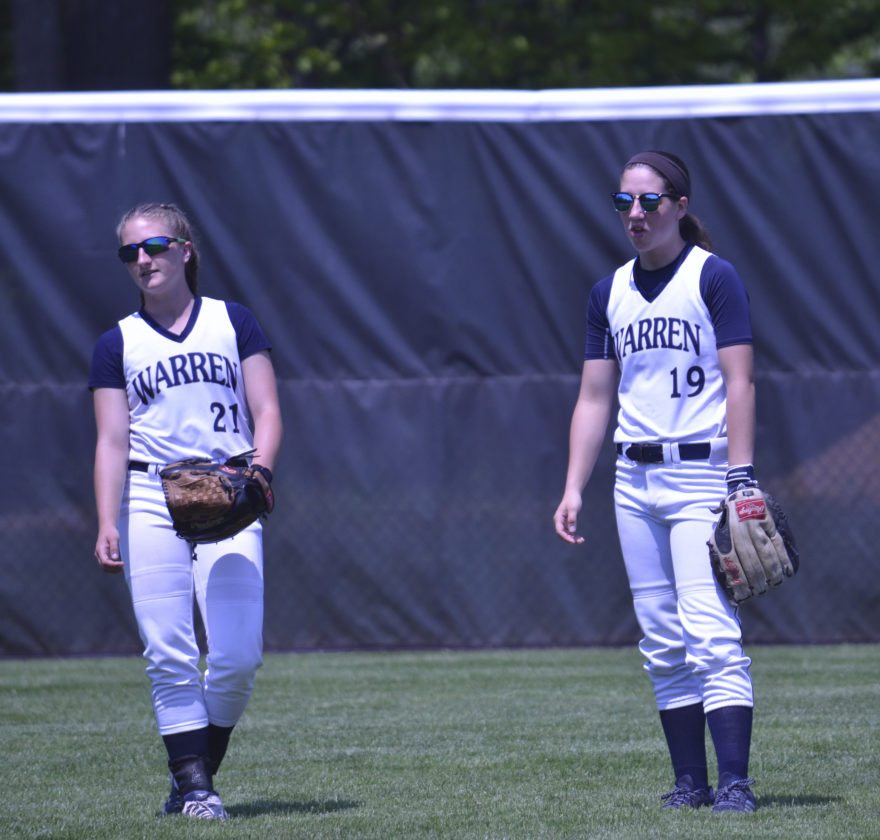 The approach for the Warren Area High School softball team in the District 10 playoffs has been very businesslike.

Don’t expect that to change on Monday against Slippery Rock, even with the prospect of a championship on the immediate horizon, beginning at 2 p.m. at Penn State Behrend.

Whether it’s the first round loss last season that serves as a motivating factor, or the fact that this team, which plays five juniors, two sophomores and three freshmen on a regular basis, is simply more experienced and an improved all-around team, there’s no doubt they have played like a group on a mission.

“This game has been our goal all season long,” said head coach Jon Sitler. “Recognizing we belong in this moment and being ready to embrace it.”

It’s not always the case where the postseason plays out like everyone expects, but in 4A softball, that’s exactly what has happened.

The Rockets are led by a pair of talented seniors in Macy McCall and Cheyenne Hindman.

McCall checks in with a .545 average, with half of her hits going for extra bases, including five home runs. Hindman, meanwhile, is hitting .548 with four home runs and 25 RBI.

Junior Julianna Hutchinson is hitting exactly .400 with 14 doubles, while Brynn Horner is batting .358 with a team-leading 30 RBI.

“I’ve watched them on video and have talked to several coaches,” Sitler said. “They’re aggressive. I’m going to go into this game and tell our players that I’m going to assume that they want it just as bad as we do, hopefully not more. They seem like they’re peaking in the playoffs.

“Specifically, they’re aggressive on the bases. They can hit the ball, especially their top two or three girls. And they play solid defense and have a pitcher that spins it really well. She does a good job of working in and out.”

Warren has been peaking in the playoffs as well.

They have got production up and down the lineup in their two playoffs wins, and pitcher Ellie Lobdell has allowed just one earned run and struck out 20.

Lobdell was good as a freshman and sophomore, but has taken her game to another level this season.

After striking out 136 and walking 56 last season, she has struck out 182 and walked just 26 this year while sporting a microscopic 0.89 ERA.

“She’s worked hard in the offseason and during the season and continues to work hard,” Sitler said. “She wants to pitch at the next level. I’m not saying it was a light switch or anything like that, but I’ve seen it first hand, going to her travel practices and seeing her in open gyms. She’s willing to work hard. I think that’s where the growth has come. Not only her improving, but working harder and wanting it more.”

Sophomore catcher Grace Wortman has done a great job working with Lobdell and came through in a key situation in the semifinals against LeBoeuf, getting hit by a pitch with the bases loaded to spearhead a four-run fourth inning in what was previously a scoreless game.

Gracie Wood, Julia Lobdell and Kelsey Stuart are all batting well over .300 and all of them, along with left fielder Kyleigh Wilson, have played stellar defense in the playoffs.

Together, every single player on the roster has come together to create a truly special team.

“They’ve done a great job creating their own team and not living on past success,” coach Sitler said. “Every single kid on this team has, with the tangibles and intangibles gotten better from last season and the beginning of this year. The best thing about this team from a coach’s perspective is that it’s an enjoyable team, an enjoyable group of girls.

“They have such character and all of them are so enjoyable to be around; they’re such good kids. But on top of that, to see them grow up, and many of them become leaders, just makes me so proud. That’s really, win or lose, what it’s all about.”

And, just because they have been laser-focused on the field, doesn’t mean they don’t like to have fun.

In fact, that’s when this team is at it’s best.

“We play best when we play loose,” Sitler said. “As cliche as this might sound, it’s true. When we’re ourselves, the girls are singing on the bus, dancing in the dugout … I wouldn’t trade this team for any team, and that’s no joke.”