Youngsville holds off Eisenhower for second time this season, 6-5 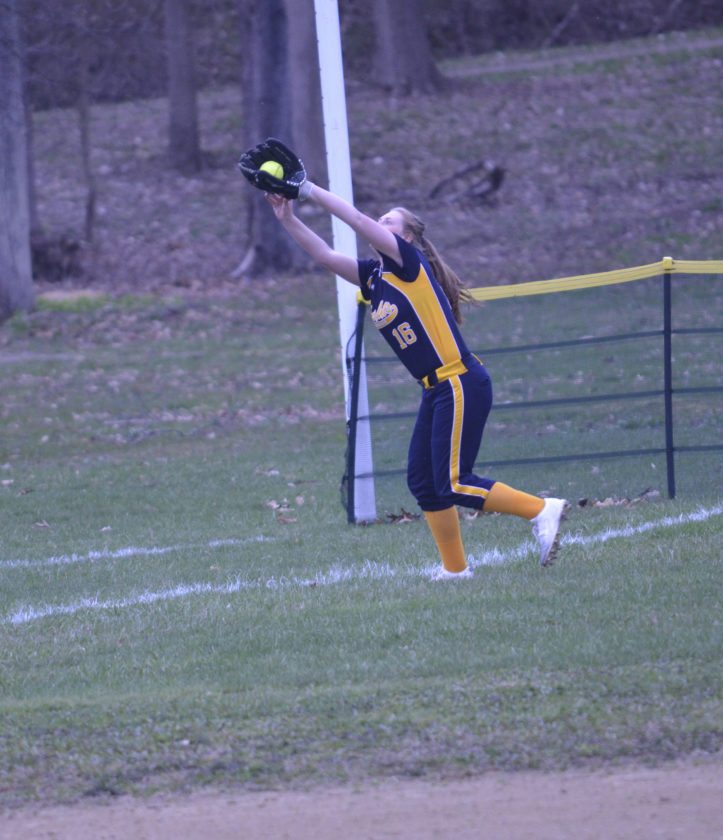 The Backyard Brawl softball battle between Youngsville and Eisenhower followed a similar path to the first meeting last week.

The Lady Eagles jumped out to an early lead, and Eisenhower rallied late.

Much like that first contest, Youngsville was able to hold off the Lady Knights, 6-5 at Werner Park on Friday.

“That’s a good game,” said Youngsville coach Scott Ishman. “Eisenhower played us tough. Yesterday (Thursday) we had a rough outing and this game they came out and played together and played well.”

The Lady Eagles got going right away, as Erin Dunn, who had a big day both at the plate and in the field, singled with out out and, with two outs, Andrea Sveda drove her in with an RBI single. 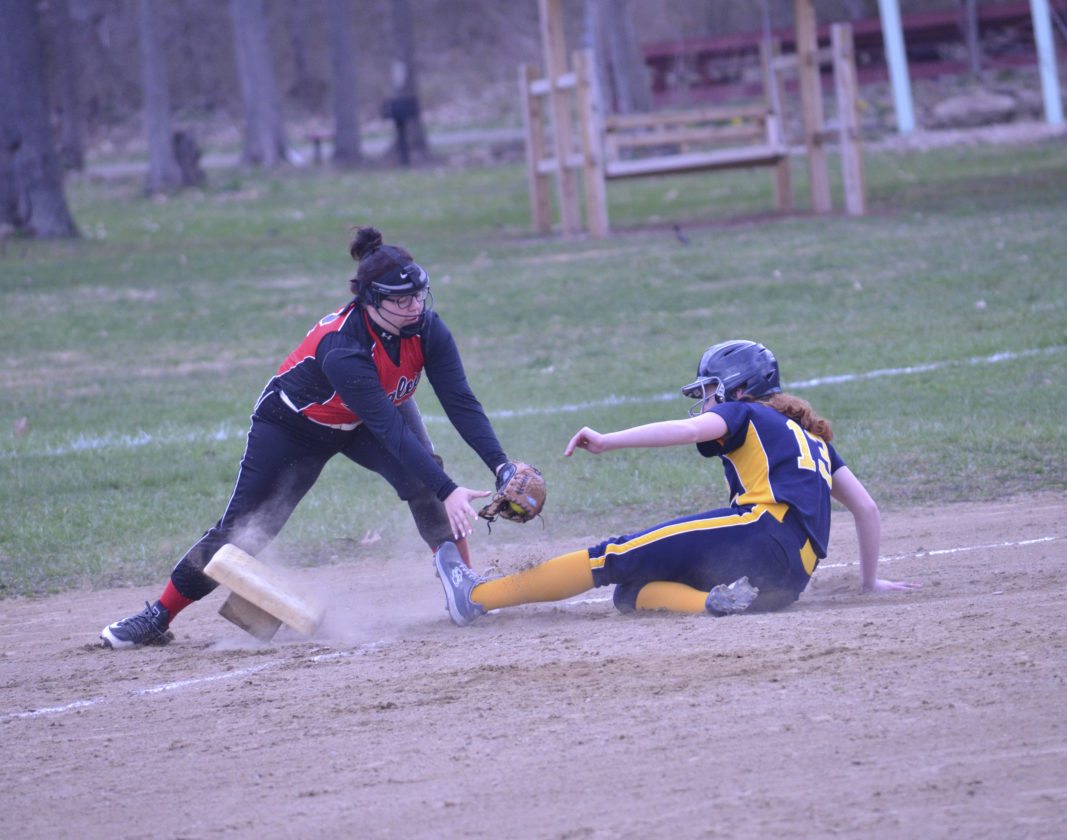 Eisenhower’s Delaney Chase slides in safely to third base, knocking it completely off in the process, as Youngsville’s Morgan Lawson applies a tag during Friday’s game at Werner Park.

Eisenhower took its first and only lead in the bottom half of the frame.

Leadoff hitter Delaney Chase reached on an interference call and, after she stole second, Lexi Head laced a double to bring her in.

Head went to third on a groundout by Brittany Smith and scored on a wild pitch to make it 2-1 Ike.

The early back-and-forth continued in the top of the second. 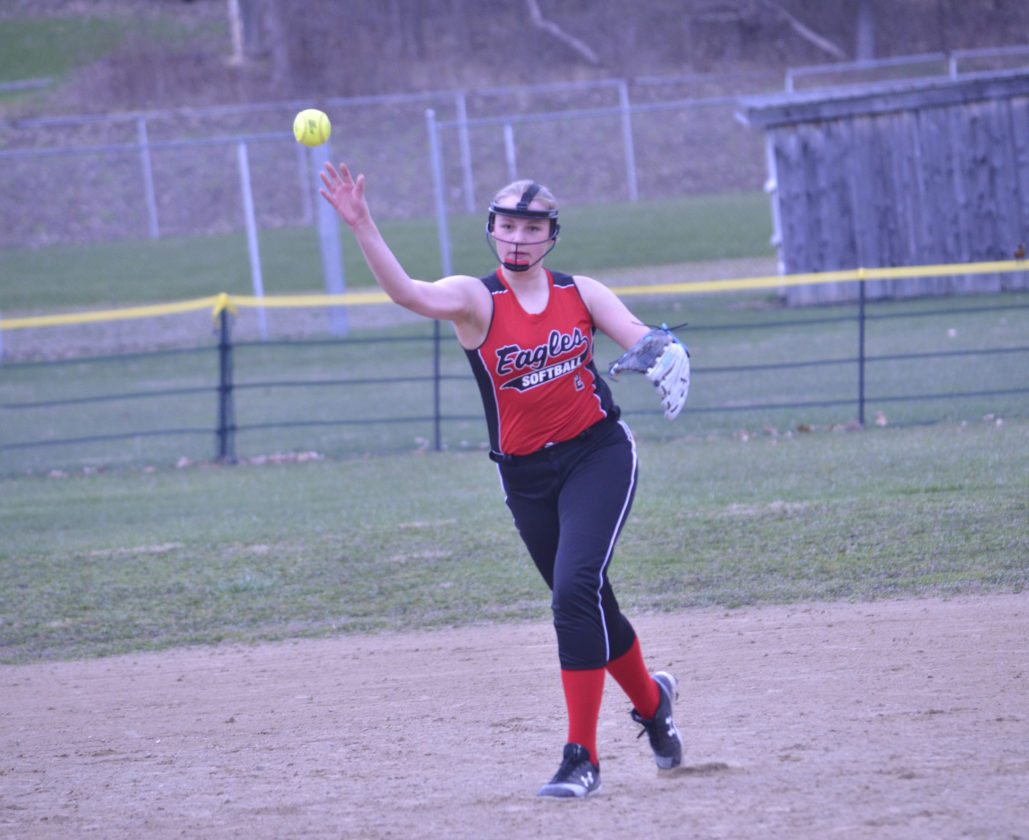 Youngsville's Cassie Dalrymple fires to first for an out.

Sveda kept Eisenhower’s bats quiet in the second, and Youngsville followed with an explosive third inning that ultimately won them the game.

Destiny Upton was hit by a pitch with one out, and that got things started. Lawson followed with a single and Cassie Dalrymple came up with another base hit, this one bringing in Upton to give YHS the lead.

That brought the lineup back to the top, and Kamryn Weissinger belted an RBI single, Dunn was hit by a pitch and Maddie Cratty and Sveda followed with back-to-back RBI singles to make it 6-2.

“I was really happy with our performance today,” Ishman said.

Eisenhower, much like they did in the first game, wasn’t going down without a fight.

They got one of the runs back in the bottom of the third, with Shelby Kuzminski reaching on an error and pinch-runner Morgan Kellogg coming around to score on a single by Alexis Courtney.

The Lady Knights scored twice more in the fourth.

Destiny Snook singled and ultimately came around to score on a sharp single off the bat of Chase.

Chase used her speed to get around the bases, stealing second and third and coming home on a wild pitch to bring the Lady Knights within one, 6-5.

“My girls are coming along so well,” said Eisenhower coach Mike English. “We have to work on some things, some fundamental stuff, but now that we’ve got them this far, that stuff is going to make sense.”

Sveda buckled down after that, getting a groundout and lineout to preserve the lead for Youngsville, and she put up three scoreless frames to end the game, with the help of her defense.

Miranda Garris reached on an error to start the fifth inning and advanced to second on a wild pitch. Courtney followed, hitting a hard smash to shortstop that Dunn was able to dive and make a play on, then flipping to second for a double play.

The play was even more critical considering the next batter, Phoebe Tower, doubled to deep center.

Sveda induced a groundout to escape the threat.

“Our defense played really well,” Ishman said. “Erin Dunn had a really nice double play. That catch, I always tell her you go for everything and good things will happen.”

Courtney singled with two outs in the seventh, but Sveda got another groundout to end the game.

Both teams have busy weeks next week, with Youngsville playing at Sheffield on Monday and Eisenhower is at Union City.

“I’m so proud of my young team,” English said. “They’re sticking through the adversity and the hard times, and we’re going to start right into it again next week.”

Warren’s Tyler Gustafson slides across home plate to score a run during a game against Harbor Creek at Harbor Creek High School, Friday, April 27, 2018. The run was the only one the Dragons would score as the Huskies came away with a 7-1 win.

Dust flies off Warren catcher Aidan Morrison’s glove as he catches a foul ball during a game against Harbor Creek at Harbor Creek High School, Friday, April 27, 2018. The Huskies moved into sole possession of first place in Region 6 with a 7-1 win over the Dragons.

Youngsville’s Cassie Dalrymple fires to first for an out.

Eisenhower’s Delaney Chase slides in safely to third base, knocking it completely off in the process, as Youngsville’s Morgan Lawson applies a tag during Friday’s game at Werner Park.

Youngsville shortstop Erin Dunn throws to first in front of third baseman Morgan Lawson during Friday’s game against Eisenhower at Werner Park. Dunn had a pair of hits and turned a key double play in the Lady Eagles’ 6-5 win.