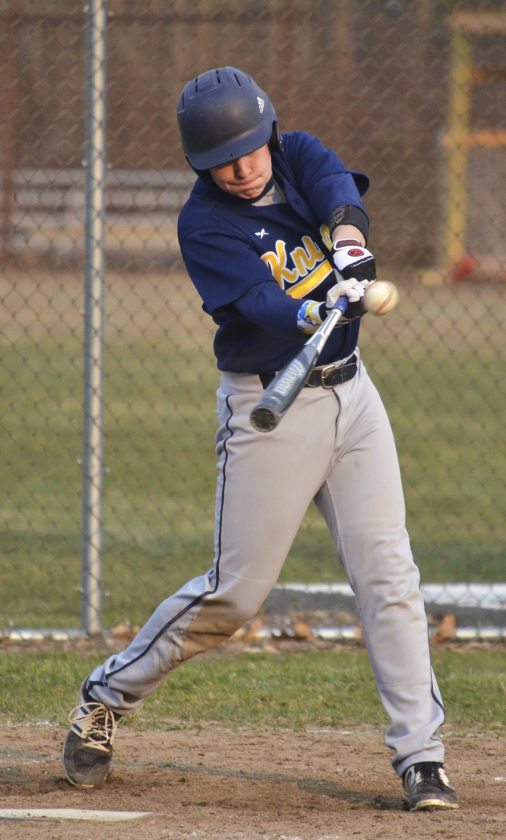 Times Observer photo by Brian Hagberg Eisenhower’s Drake Gens squares up on what would turn out to be the game-winning double during the seventh inning of a game against Iroquois at Werner Park, Friday, April 13, 2018.

Just before the bottom of the fifth inning got underway at Werner Park Friday, Eisenhower assistant coach Rick Rholin off-handedly said, “We’re setting this up for a walkoff.”

Rholin’s congregation at Praise Fellowship Church, where he is a pastor, may want to listen a little more closely this week as his words proved to be prophetic.

Drake Gens’ RBI double in the bottom of the seventh inning gave the Knights (1-1) a walkoff win against visiting Iroquois.

“A walkoff is exciting,” Gens said. “This was fun. We had fun today.”

“This (win) was very important,” Eisenhower coach Joe Troxel said. “But more importantly, these guys have been working really hard at fundamentals.” 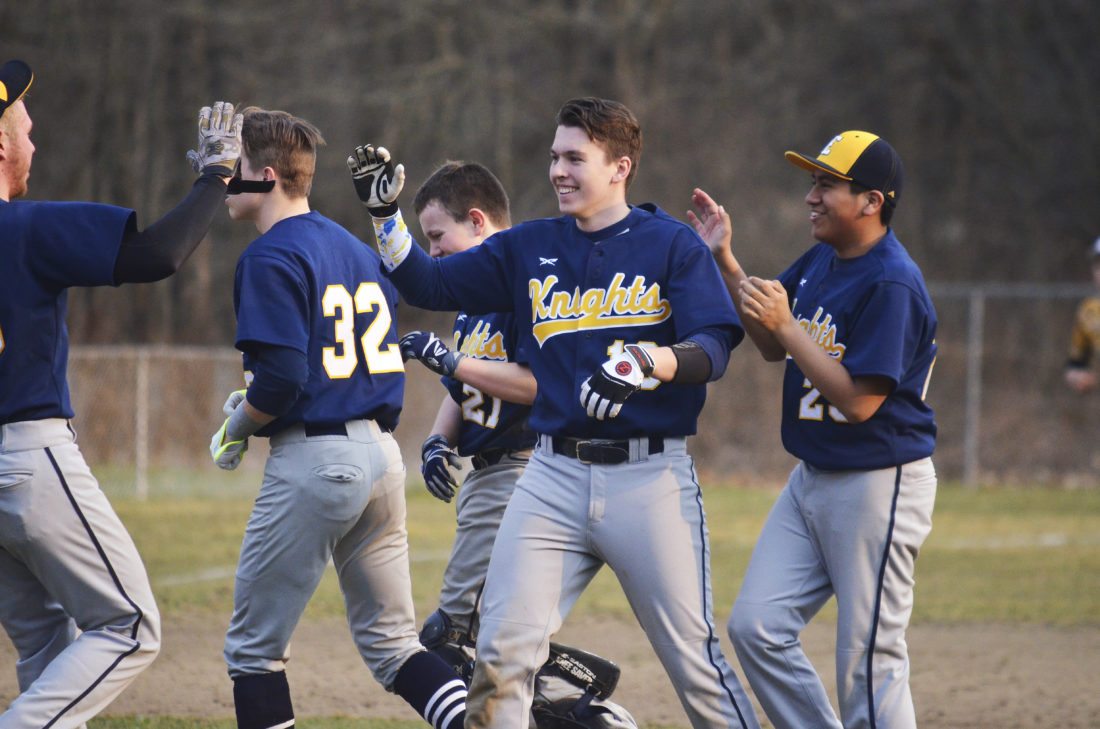 Drake Gens (16) celebrates with his Eisenhower teammates after hitting a walkoff RBI double in a game against Iroquios. Gens was 2-4 with two RBI batting and allowed only two hits and one run over four innings to lead the Knights to a 5-4 win over the Braves.

In addition to the late-game heroics, Gens also started on the mound for Eisenhower and got into some early trouble.

Matt Alecci led off the game with a single to left and Haydn Gray followed with a walk. They advanced to third and second, respectively on a wild pitch. Gens then settled in, getting Jeremy Laniewicz to pop out to first and ending the inning with consecutive strikeouts of Matt Tarr and Gavin Wakefield.

“I was just trying to find the zone,” Gens said. “We just try to throw so they can’t hit it somewhere we aren’t.”

Eisenhower responded quickly in the bottom half. Drew Williams roped a double to right to lead it off and advanced to third on Gens’ ground out. Nick Smelko put down a squeeze bunt to score Williams and give the Knights a 1-0 lead.

Iroquois tied things up in the third. Alecci reached on an error to start the inning, advancing to second on the play. Gray put down a sac bunt to move him to third and Laniewicz hit a sac fly to right to score Alecci and put the Braves on the board. 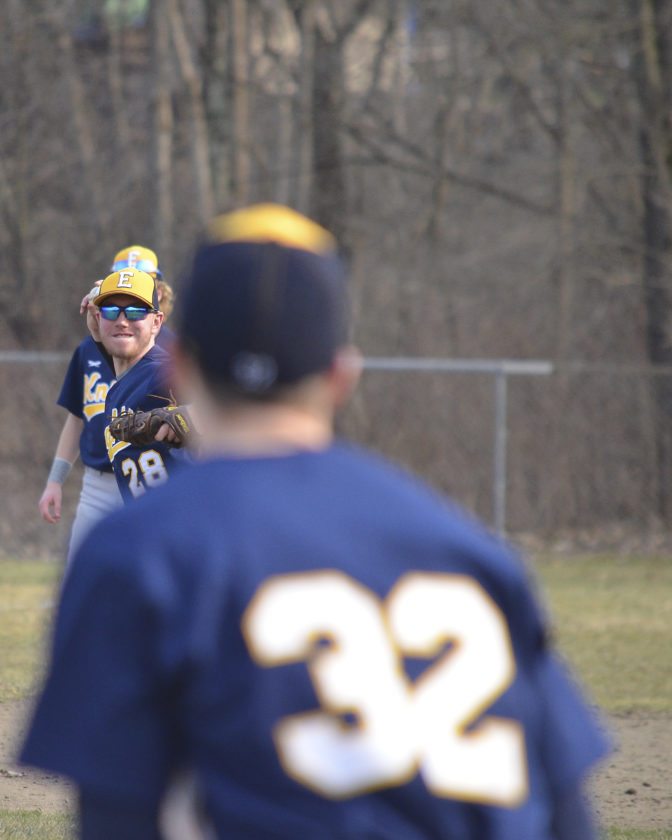 Times Observer photo by Brian Hagberg Eisenhower third baseman Dakota Chase throws to first baseman Nick Smelko for an out during a game against Iroquios at Werner Park, Friday, April 13, 2018.

Neither team was able to do much again until the fifth. With one out in the top of the inning, Drew Johnson singled to left. An attempted pickoff went wide and Johnson moved to second. He then stole third and scored on an errant throw to give Iroquois a 2-1 advantage.

The Knights answered right back. Owen Trumball drew a leadoff walk. Teagan Gray followed with a single and both runners advanced an extra base on an error. Jared Beers’ sac fly scored Trumball and tied the game at 2-2. Two batters later, Gens hit his first RBI double of the game to give Eisenhower a 3-2 lead through five.

Laniewicz started the sixth with a slow roller to third for an infield single. He then stole second and third. Tarr drew a walk and with Wakefield at the plate, Laniewicz bit on a fake throw to second and was caught in a rundown and tagged out. Tarr smartly ran to third during the rundown and scored on Wakefield’s groundout.

It was still tied going into the seventh. Mike Jackula led off the Iroquois half with a bloop hit just over the reach of a leaping Zach Rholin. Jackula stole second and third, the Braves sixth and seventh stolen bases of the game, and Collin May followed with a RBI single. Iroquois would load the bases with only one out, but Dakota Chase got Laniewicz to strikeout and Tarr grounded out to first to end the inning.

Trumball led off the home half with a single to right and Gray followed with a walk. Both runners advanced on a passed ball and Trumball scored on a Beers groundout to tie it at 4-4 and set the table for Gens’ walkoff. 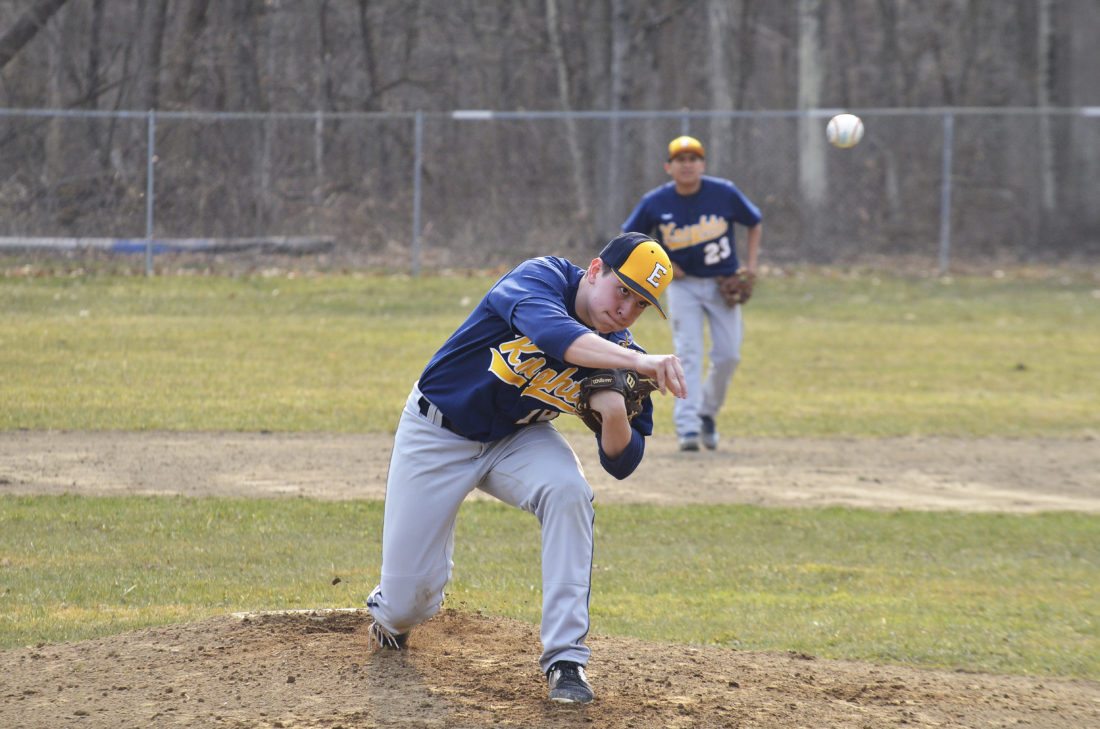 “What you saw (in the seventh) was all real fundamentals,” Troxel said. “Get on base, advance and score.”

Gens went 2-4 from the plate with two RBI and two doubles. He also pitched four innings, allowing only one run on two hits while walking one and striking out three.

Eisenhower will look to carry this momentum forward when the Knights travel to Cochranton Monday.