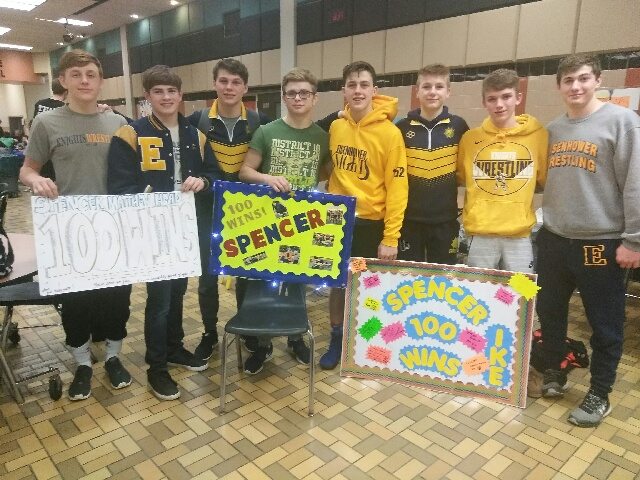 Spencer Head celebrates his 100th win with his teammates.

SHARON – Youngsville and Eisenhower combined to send 11 wrestlers to the District 10 Class 2A wrestling tournament Friday and Saturday in Sharon.

Five of them will advance to the Class 2A Northwest Regional wrestling tournament March 2-3.

Logan Jaquay, Garrett Head, Spencer Head and Joey Bauer will represent the Knights, while Mason Benjamin advanced for the Eagles.

Jaquay and Spencer Head finished third at 106 and 152, respectively. Garrett Head and Benjamin were fourth at 145 and 285, while Bauer finished sixth at 220. Bauer was unable to wrestle in the fifth place match due to injury.

Spencer Head reached his milestone 100th win in the process. 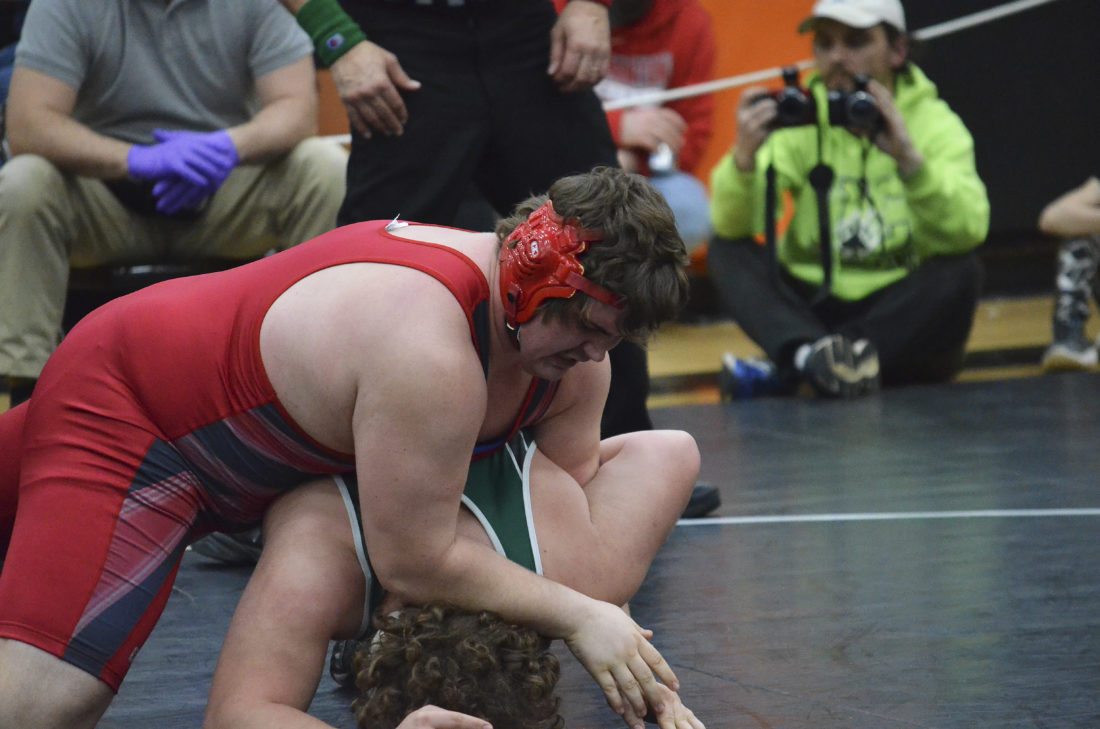 “I thought all the guys wrestled well,” Eisenhower coach Kris Black said. “It amps up at districts. You don’t get any easy matches.”

That was evident early in the day as Jaquay dropped a tough 9-7 decision to Jamestown’s Chase McLaughlin. He was able to recover quickly and got a tech fall over Cochranton’s Shane Peterson in the consolation semis. He finished the tournament with a second period pin of Harbor Creek’s Joe Gabler.

Garrett Head also suffered a close loss in the semifinals, 3-0 to Reynolds’ Hunter Michaels (who would go on to win the D10 title). He bounced back to get a pinfall victory against Sharon’s Luke Gaston in the consi semis before dropping a 10-0 major decision to Greenville’s Mason Karpinski in the third-place match.

As was the trend, Spencer Head lost a close semifinal match to start the day. This time, it was a 6-5 decision to Titusville’s Luciano Derose. He came back to pin Sharon’s Sully Aaron in the consolation semis, then got a 9-3 decision over Sharpsville’s Cameron Prebble to take home third place. It was Head’s second win over Prebble in the tournament.

Bauer got a 4-2 decision in the consolation quarterfinals, but suffered an injury during the match and was forced to forfeit to Lakeview’s Tyler Zebrovious in the semis. Bauer is hoping to be ready to go for regionals.

Benjamin opened with a pin over Jamestown’s Mitchell Nesevich in the consolation quarterfinals, then won via default over Reynolds’ Derek Skeehan in the semis. He was pinned by Union City’s Matt Long in the third place matchup.

All five wrestlers will look to keep their seasons going when they return to Sharon this weekend for regionals. The top four in each weight class will advance to the PIAA Class 2A State wrestling tournament at the Giant Center in Hershey.