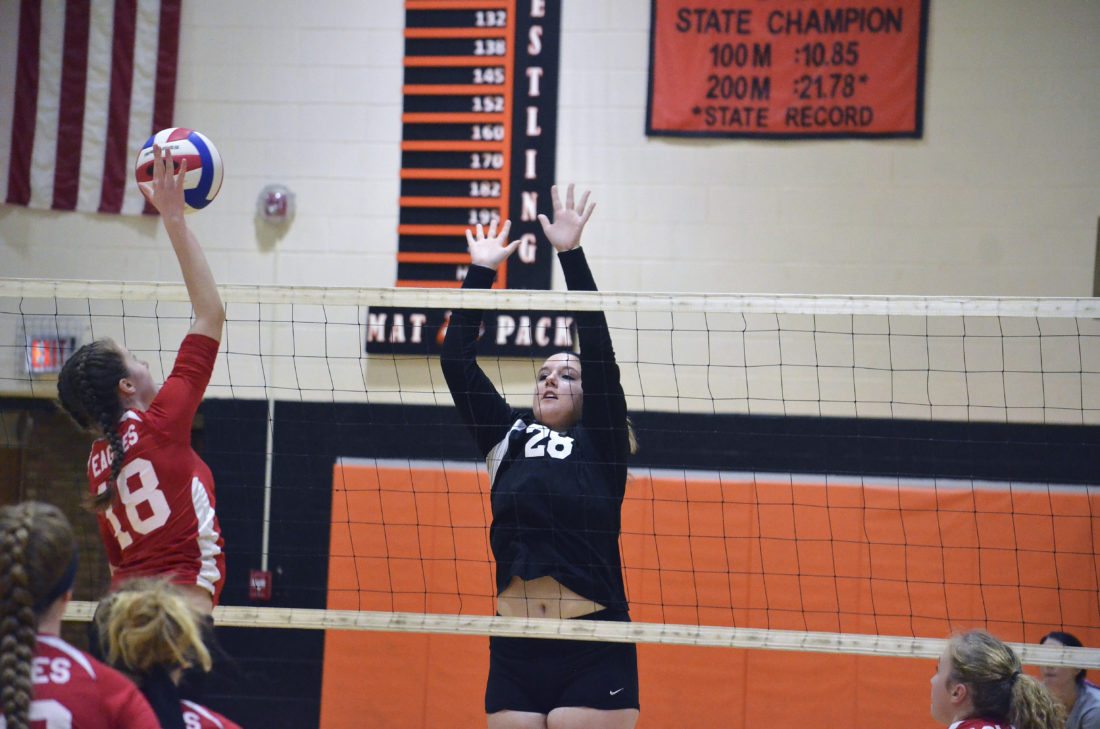 Pregame ceremonies that change player routines can sometimes have a negative effect on game performance, especially typically emotional ones like Senior Night.

Add in a surprise appearance from a loved one serving abroad, and the emotion factor increases tenfold.

Sheffield’s volleyball team was able to channel those emotions into a dominating effort however, as the Wolverines swept county rival Youngsville in Sheffield Thursday.

Sheffield began the week with a sweep at Eisenhower Tuesday, then came into Thursday’s match knowing it would mark the final time its five seniors would take the court wearing a Wolverine jersey. 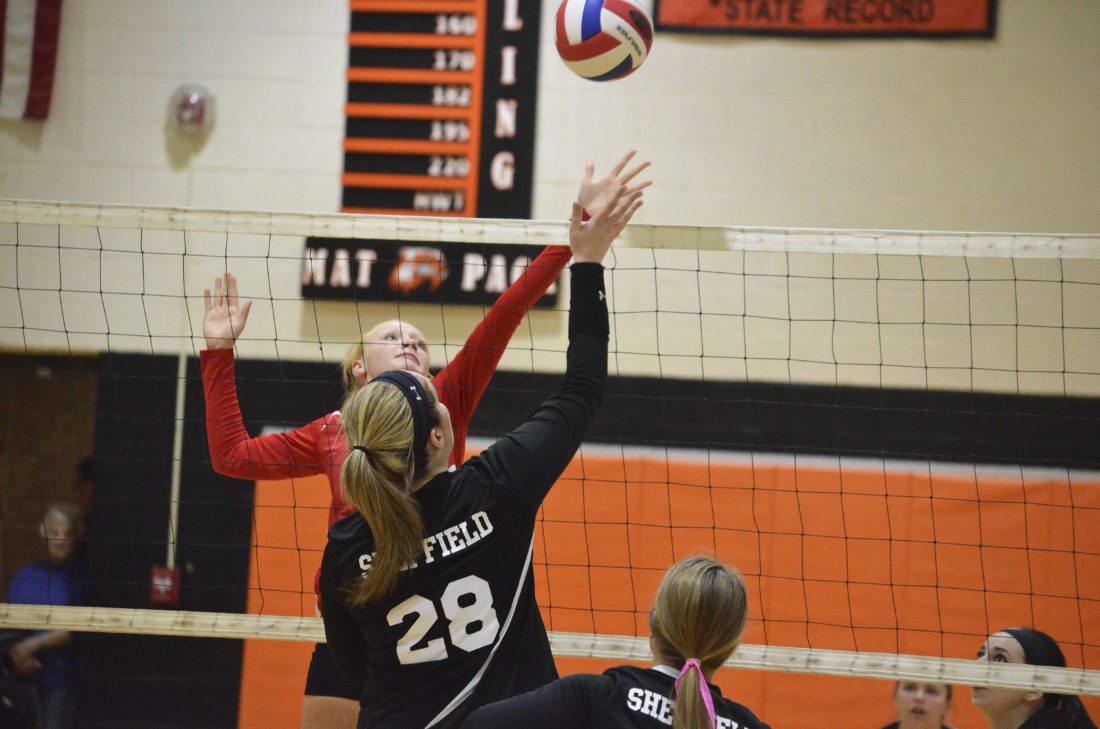 Youngsville’s Megan Foley tries to put the ball over the fingers of Sheffield’s Lexi Lyon during their match at Sheffield High School, Thursday, Oct. 26, 2017. Foley had four kills during the match, but it was Lyon and the Wolverines who came away with the 3-0 sweep of the Eagles.

On top of that, senior Lexi Lyon got a big surprise during the recognition ceremony as her brother, Army Staff Sgt. Chris Lyon, currently in the midst of his fifth deployment, made an appearance via video chat to share Lexi’s special moment. The younger Lyon, who was unaware the video feed had been set up, burst into tears when she turned to see her brother’s face projected on the gym wall. Chris, despite some interruptions in the feed, was able to deliver a message to his sister and a local Soldier delivered flowers on his behalf.

“A service member talking to his sister really puts into perspective that we’re able to (play this game) because of their sacrifice,” Lemay said.

Once the festivities were over, the Wolverines went right to work, jumping out to a quick 9-4 lead to open the first set. Marissa Grubbs stepped to the service line at that point and Sheffield sandwhiched a system kill in between a pair of Grubbs aces to go up 12-4 and force a Youngsville timeout. Andrea Sveda got a kill to stop the bleeding for the Eagles, but a service error put the ball right back in Sheffield’s hands. The Wolverines ran away with the set from that point and won it 25-11.

“We couldn’t have played any better,” Lemay said.

Sheffield used strong serving to build a lead in the second set. Youngsville, as has plagued the Eagles for most of the season, had issues with serve receive during the set. Trailing 13-5 at one point, however; the Eagles rallied to pull within five at 17-12. Sheffield bared down at that point and allowed Youngsville only two more points as the Wolverines won 25-14. 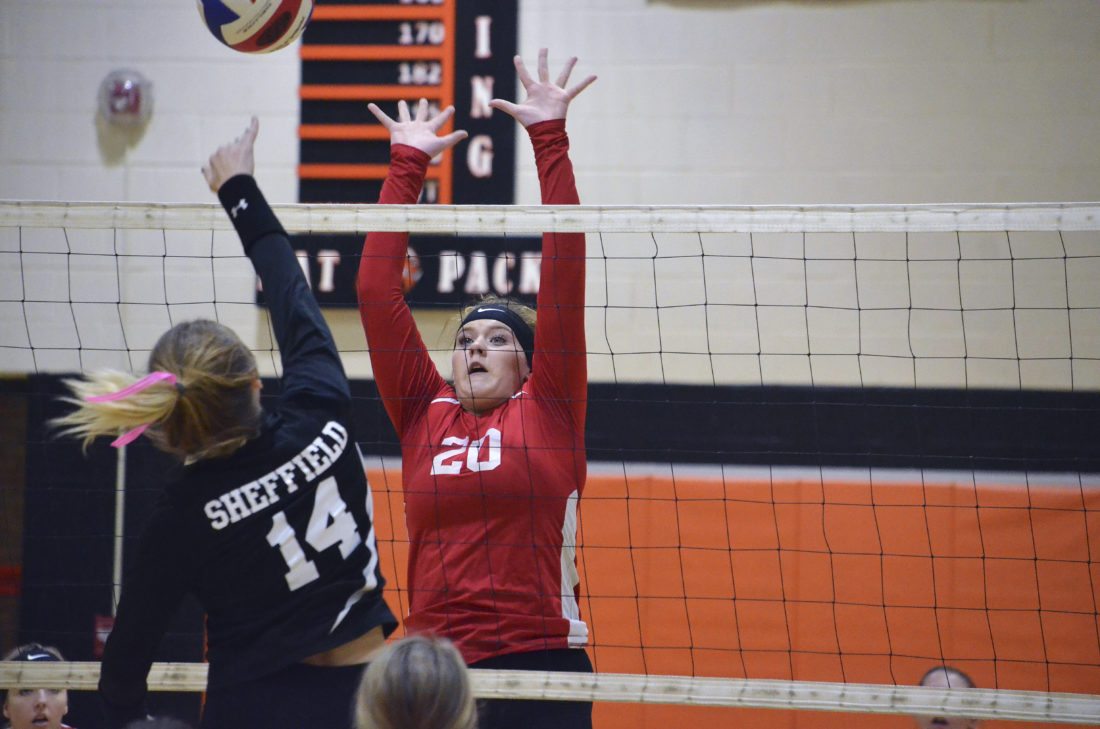 Youngsville’s Andrea Sveda goes up to block Laurel Connelly’s attempted kill for Sheffield during their match at Sheffield High School, Thursday, Oct. 26, 2017. Sveda had a strong game at the net for Youngsville, but the Eagles came out on the losing end of a sweep.

“We were in system,” Lemay said. “Most of our points were either kills or aces. They were earned points as opposed to the other team making a mistake. The girls like it that way.”

Sheffield had no let up in the third, racing out to a 16-5 advantage. The Wolverine dominance continued through the set as Sheffield completed the sweep with a 25-9 win.

“We only get to play the county teams once a year because we’re in different leagues,” Lemay said. “Both of them are young teams and I look for them to improve. They have a lot to work with.”

That assessment serves as a reminder of the stark contrast facing Sheffield. The Wolverines will now have to replace five seniors who came up with Lemay as a coach since their seventh grade season.

“For these five seniors (the win) meant that much more,” Lemay said. “I love these girls. They’re going to be difficult to replace.”

“She was a little hesitant when I told her my plan to put her in,” Lemay said. “She didn’t want to hurt the team. But once she got in the flow of the game she got more confident.”

While Sheffield ends its season with the win, Youngsville now turns its attention to the District 10 playoffs.

A clerical error prevented the Eagles from opting out of postseason play, and Youngsville got a tough draw by having to face Kennedy Catholic as a first round opponent. Additionally, the Eagles will be without a number of regular contributors due to scheduling conflicts.

Rather than dwelling on the negative, Youngsville coach Barb Lutton is looking forward to the opportunity.

“We’re not afraid to play them,” she said. “We’re going to give them our best shot. We look forward to it as a learning experience.”

Youngsville will take on Kennedy Catholic at 1 p.m. Saturday in Meadville.

Sheffield also earned a sweep in the junior varsity contest with a 25-20 and 25-22 win.

Seebe Proper had four aces, Krystal Kinney had two digs and Annika Chase had an ace for Youngsville.