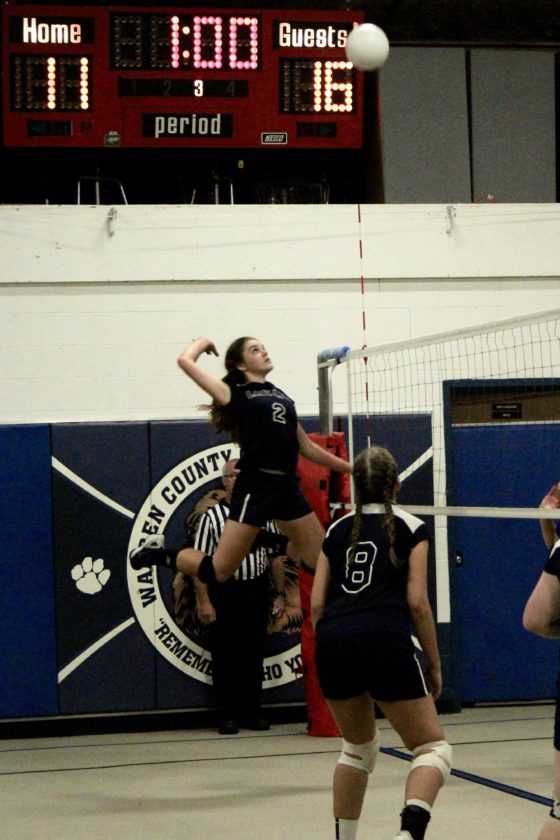 Warren County Christian School’s Rachel Brenner connects on one of her 19 kills in a win over CCSI.

“Becca Erdman was really on with her serving today and Rachel (Brenner) with 19 kills, that’s probably her highest total,” said coach Mark Brenner. “We expected to win and are glad that we did.”

“Gracia had a great game,” coach Brenner said. “It was really a breakout game for her. Emily Cox also did great with her serving.”

The Lady Lions are back in action today at Calvary Baptist (Meadville) and will be looking for a measure or revenge, as CB handed them a loss at home earlier in the season.

“This will be a real test,” coach Brenner said. “They beat us at home earlier in the season and we’ll be looking for a chance at redemption.”

The Eisenhower volleyball team rebounded from a tough outing at the Sheffield Tournament with a 25-10, 25-22 and 25-22 sweep of Tidioute Monday.

The unforced errors that have plagued the Knights throughout the season popped up again in the second and third sets, but Eisenhower was able to power through to come away with victories in both sets.

“Credit to Tidioute, they didn’t quit and played hard,” Eisenhower coach Scott Olson said. “But I liked the way we played tonight. We took ownership of our mistakes and didn’t complain.”

Olson has been preaching patience all season as his young squad learns a new system and adapts to a new culture. He said he saw some of that attitude change Monday.

“The attitudes are starting to change,” he said. “It’s been a little step here and a little step there. We had a good attitude tonight.”

Cameran Edwards led the Eisenhower attack with 12 kills and 26 digs. Kiara Weber added 10 kills and 15 assists while Currie Hultman and Caroline Hishman led the team in assists with 16 and 15, respectively. Emily Wheeler and Tess Morningstar each had two blocks.

Catrina Edwards and Delaney Chase both had six aces in the match. Edwards added 11 digs and Chase had eight assists and five digs. Phoebe Tower had 10 digs and Ashlee VanGuilder had five kills and four digs.