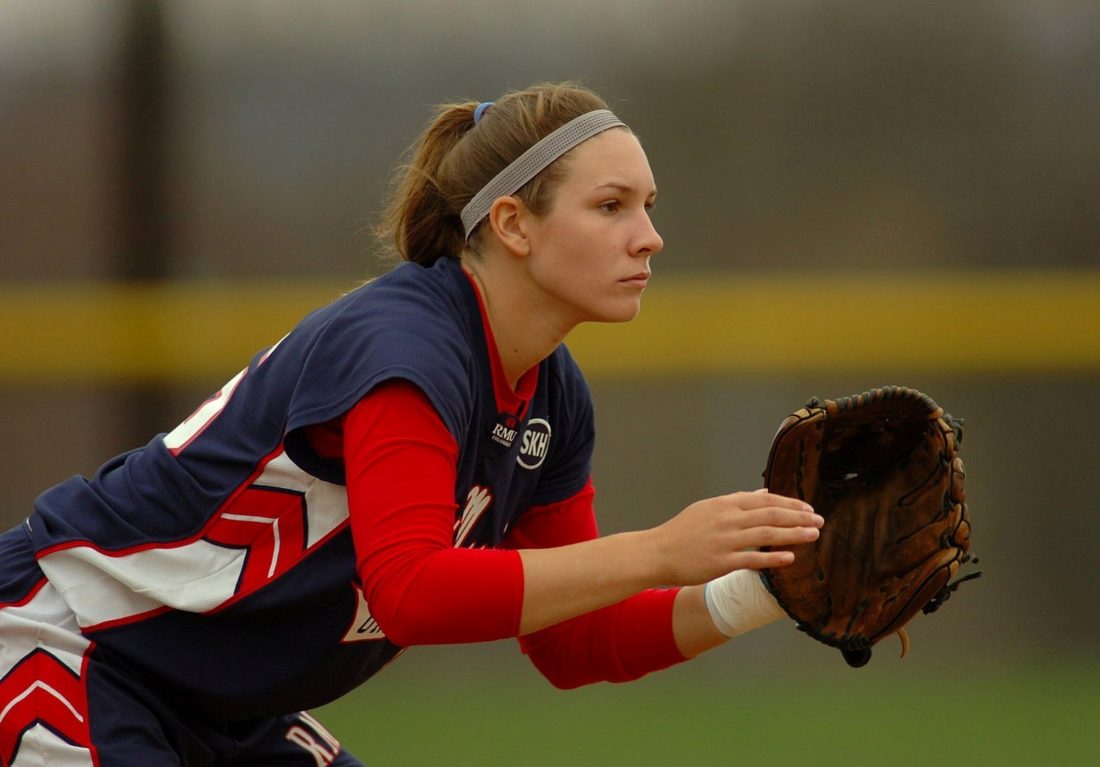 The turning point in Spargo’s softball career occurred in the eighth grade. That’s when her father said it was time for a switch.

So, this Warren native went from batting right-handed to left-handed.

The rest, as they say, is Hit-Story.

Achieve she did. Like no other in Robert Morris University annals.

Spargo was RMU’s resident Batwoman from 2003-2007, setting the career and single-season hit records. Her totals of 219 and 72 still stand today.

A four-year starter at shortstop, Spargo also ranks second all-time in steals (48), third in runs (109) and sixth in batting average (.340).

Her prowess helped the program to a Northeast Conference title and its first-ever appearance in the NCAA Tournament in 2005.

“To have something like this bestowed on me is just overwhelming and exciting,” said Spargo, an elementary school teacher who resides in Charleston, W.Va., with husband Evan and daughter Madelyn, 1. “Softball has been such a huge part of my life and I’ve experienced so many things because of it. This is just the icing on the cake.”

While growing up in Warren, about a three-hour drive from the RMU campus, Spargo was a good player. She discovered greatness when her father James, a former basketball player at Lycoming College, suggested she learn the art of slap hitting.

The two spent countless hours refining her technique, one in which a hitter lays down a quick bunt, slaps the ball to an open spot or swings away.

Spargo’s speed and dogged determination made her seem like a natural.

Or, was that, The Natural?

“I give so much credit to my dad because he had a special knack for getting me out there to do the extra work,” said Spargo, whose married name is Dale. “Both he and my mother were so supportive. They were able to push me and challenge me. And when we decided to try slap hitting, it was challenging at first because I was a natural right-handed hitter. But my dad said it would be a good fit. So, he studied it and learned about it and took the time to teach me. It was a huge turning point, because being a triple threat allowed me to take things further in my career.”

She was especially dominant during the run to the NCAA Tournament. She set single-season records in hits and average (.387), while scoring 43 runs and stealing 17 bases that season. “The NCAAs were the highlight of my career,” Spargo said. “To win the NEC Tournament and to be a part of the selection process for the Big Show was a big deal. We got to go to Missouri and play both Missouri and Stanford. We didn’t win, but getting there was an amazing experience.”

Buoyed by those supportive parents who attended nearly every game, Spargo accomplished seemingly everything during her time at RMU, on and off the field.

After graduation, Spargo served as a graduate-assistant on coach Craig Coleman’s staff for two seasons while earning a Master’s Degree in instructional leadership. She finished with a 4.0 GPA.

Spargo spent the next three years as an assistant coach at North Allegheny High School while teaching elementary school in the Pittsburgh area.

Her life changed upon meeting future husband Evan, who has served in the U.S. Army and National Guard.

The couple moved to Alabama so Evan could attend flight school.

Next was the move to Charleston.

A benchmark occurred on Nov. 30, 2013. That’s when Spargo’s mother, Claudia, left the hospital after 52 days to watch her daughter celebrate marriage. A double lung transplant proved to be an inconvenience, not an obstacle for Claudia.

“She wanted to be there,” said Spargo, who reports that her mother is doing well today. “It was tough, but she made it. Then she went right back to the hospital.”

Due to a deployment in Kuwait in 2015, Evan was unable to be around for much of daughter Madelyn’s first year. Jill, though, handled the situation with aplomb. She moved back with her family in Warren during that time and made the most of the situation.

With Evan back home and her extended maternity leave over, Spargo said she’d like to coach softball again. And chances are, she’ll be a hit. Again.

Just like she was during her magical four years at RMU.

“It was like a dream playing there,” Spargo said. “I’m from a very small town. So to be able to go to Robert Morris and to achieve so many of my goals, it was just really, really special.”