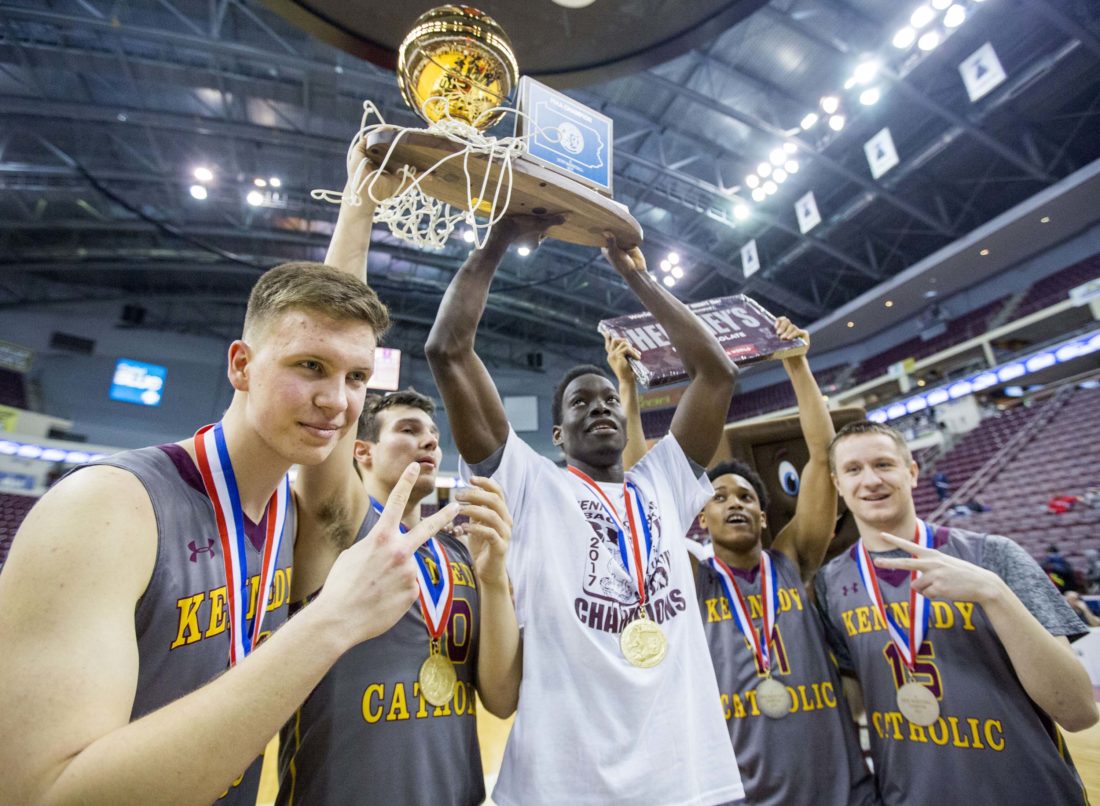 HERSHEY — Kennedy Catholic won its second state championship in as many years with a 73-56 victory over Girard College in the Class 1A final Thursday at Hershey’s Giant Center.

The Golden Eagles have now won a record-tying eight titles and are second in PIAA history with 96 postseason wins.

Austin, a sophomore who already has several Division I offers on the table, also added nine rebounds and six assists.

Kennedy Catholic held a double-digit lead going into the break and never looked back, outscoring the District 1 Champion Cavaliers 43-36 in the second half.

The Golden Eagles finish the year with a record of 26-2, including a non-region win over Youngsville in early January. Their two losses came to Paul VI (Fairfax, Va.) at the Morgantown Holiday Classic and to Greater Latrobe in a late season road match-up.

Kennedy Catholic’s win kicked off a big weekend for District 10 boys basketball teams, as Meadville plays Archbishop Wood in the 5A final Friday at 8 p.m. and Strong Vincent takes on Imhotep Charter for the 4A crown Saturday at 2 p.m.

HERSHEY — Villa Maria came up one game short of a state championship for the second year in a row, losing to Bethlehem Catholic by a final score of 46-27 in Thursday’s Class 4A final.

The win marked the first state title in program history for Bethlehem Catholic, a school better known for its success on the wrestling mat than the hardwood. Villa was a runner up a season ago competing at Class 3A before moving up under the PIAA’s new classification system.

The Hawks took control with a 13-2 run in the third quarter with Brown scoring eight and Medina knocking down a three-pointer to make it 32-16. Bethlehem Catholic then began the fourth quarter with nine unanswered points as Villa scrambled to find an answer on the offensive end.

Villa Maria has been without a state championship since winning three straight in 2009, 2010 and 2011.

HERSHEY (AP) — Nothing quite like a perfect ending to a perfect season.

Maggie Wigoda scored 22 points, Emily Mealey hammered out a powerful double-double (17 points, 17 rebounds) and Adrienne Kroznuskie numbered 11 points for the undefeated Battlin’ Miners (31-0), who unloaded a 27-point salvo in the second quarter that enabled Jared Homa’s club to grab a 37-21 lead at the halftime break.

Minersville’s lead continued to mushroom, as the Miners led 56-32 after three.

Abby Schoffstall also had a terrific game for Minersville — the Miners captured Schuylkill League and District 11 titles before collaring their first state championship — dishing out 14 assists and grabbing five rebounds despite netting only four points.

Yet for a Neumann-Goretti basketball-playing side that’s already won plenty, Carl Arrigale’s Saints accomplished something Thursday night at Hershey’s Giant Center that the Philadelphia-based hammer had not done before.

And that’s rattle off a fourth straight championship.

Popping four players into double figures, Arrigale’s powerfully balanced Saints turned a separation-creating outburst early in the second quarter into a convincing 89-58 victory over Lincoln Park Charter in the PIAA’s Class 3A championship.

Kentucky recruit Quade Green topped the Saints (24-7) with 22 points, while Villanova-bound Dhamir Cosby-Roundtree finished with 15 points and 13 boards for a Neumann-Goretti side that bolted to a 42-19 lead at the halftime break.

Another factor in Neumann-Goretti’s decisive win was the rebounding edge, which swung 48-32 to the Saints. The Saints also shot nearly 51 percent (28-for-55).

Nelly Cummings poured in 37 points for Lincoln Park (25-6). Bound for the NCAA Division I level, Cummings finished his career with 2,411 points, the fifth-highest total in the Western Pennsylvania Interscholastic Athletic League’s sparkling history.