Sheffield’s Cale Albaugh (11) and his Wolverine teammates square off with reigning District 9 Player of the Year Andrew Bucheit and Kane tonight at 7:30 p.m.

Warren’s Maddie Loutzenhiser and her Lady Dragon teamamtes will take on Clarion-Limestone in the Redbank Valley Christmas Tournament on Wednesday a 6 p.m.

The Christmas season is a time of celebration and joy. It’s also more often than not the last stand for teams before they begin region and league play, if they haven’t done so already. 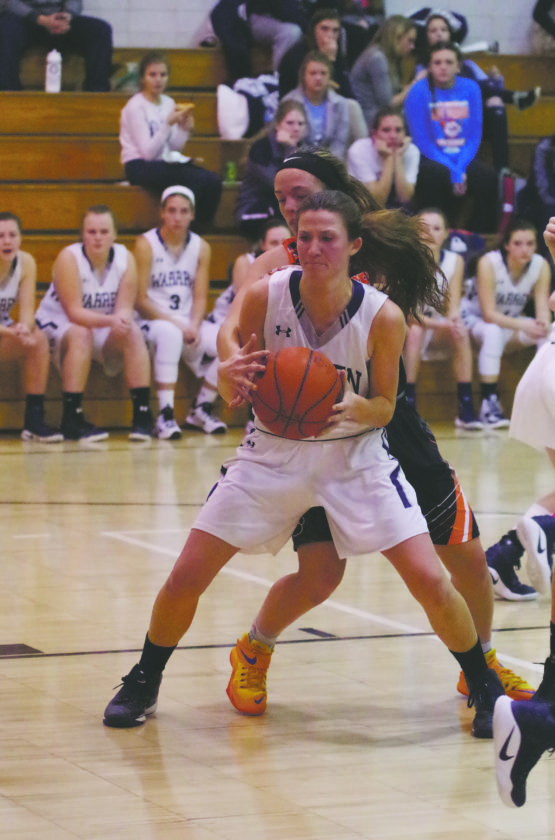 Warren’s Maddie Loutzenhiser and her Lady Dragon teamamtes will take on Clarion-Limestone in the Redbank Valley Christmas Tournament on Wednesday a 6 p.m.

A foundation is being laid for what is hopefully success in January and February, and that concludes this week with a host of Christmas tournaments.

Here’s a brief look at each:

Kane, which features reigning District 9 MVP Andrew Bucheit, is probably the favorite. Bucheit has already had a pair of monster games for the Wolves, who come in at 2-1 with their only loss being to 2A’s top team in District 9, Coudersport. They also feature freshman Chad Greville, who has a 20-point game to his credit.

Don’t count on the Wolverines though. They are 3-3 and have been competitive in every game this season. Roger Dunham and Drew Higby have led a balanced scoring attack through six games, averaging 12.2 and 10.2 ppg. respectively.

Youngsville, like Kane, hasn’t played as many games as Sheffield, coming in with a 1-3 record, with that win a 15-pointer on the road at Saegertown.

The Eagles are led by their senior trio of Wyatt Rugar, Brady Kesterholt and Levi Hendrickson.

Union comes in with a record of 2-3, including wins over A-C Valley and Redbank Valley.

Warren’s non-region schedule is as tough as any and that will continue when the 3-3 Dragons play Olean in the opening round of the IAABO Tournament at St. Bonaventure on Thursday.

The Dragons have six players averaging between 6.7 to 9.7 ppg., led by senior Seth Baldensperger. Sophomore point guard Griffin Suppa has held his own against some of District 10’s top defenses, while sophomores Jake Kupchella, Caleb Ei, Andrew Davidson and Aidan Morrison join seniors Baldensperger, Noah Becker, Braidy Blair and Tyler Gilotti in the regular rotation in the early going.

In the other contest, Nichols, a suburban Buffalo school which has produced the likes of former Duke star Christian Laettner, squares off with Bradford.

The Vikings are off to a 2-4 start and the Owls are currently 2-3 under coach Brian Hobbs.

Eisenhower is off to an 0-4 start, but don’t let the record fool you, this is a quality team that just hasn’t quite found its footing yet.

Jake Harvey, Thomas Warren and Jaydon Hayes lead a solid core of players that will look to get rolling against Titusville on Wednesday.

The Rockets, much like the Knights, are a team that at 1-4 are much better than their record would indicate.

The other opening round game features 3-1 Union City against the 1-4 hosts.

There are three quality teams who have gotten off to slow starts and one of them has a very good chance to build some momentum going into January.

Last year, this would have been an intriguing tournament with Warren going against 2,000-point scorer Brooke Hinderliter and Redbank Valley.

Hinderliter is now starring for Slippery Rock and Warren grad D.J. Hahn is playing major minutes for Cal. Warren has re-loaded and is unbeaten in the early season, while RBV has struggled out of the gates at 1-4.

Clarion-Limestone (0-4) and Forest Area (3-1) meet in the other opening round contest, with the Lady Dragons a heavy favorite to win it.

Youngsville has come out of the gates with a solid 2-2 start and will meet 5-2 Seneca in the opening round, while host Corry battles Clymer, NY in the other first round contest.

The Lady Eagles are being led on the offensive end by Caitlin Craig, who is averaging 15.8 ppg.

This tournament should be very competitive and is anyone’s to win.

Eisenhower is headed to Kane, where the Lady Wolves are one of three very solid District 9 programs in the field along with Clarion and North Clarion.

Senior Kirsten Baran has had some big games early, including a career-high 29 points against Union City.

The Lady Knights didn’t have a lot of varsity experience coming into the season, but as they get more acclimated, are continuing to get better.