A far-too-exciting event along the Allegheny 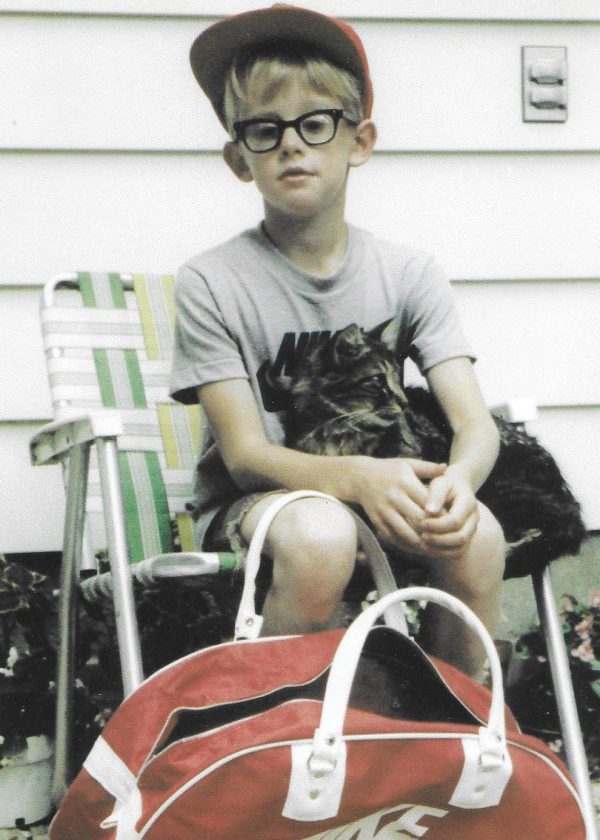 Photo submitted to Times Observer Bill at age 10 with “Fluff,” one of the cats the Stanger family acquired during their years of camping at Cloverleaf Campground on Rt. 62 north of Tidioute.

We’ve witnessed some exciting events while camping along the Allegheny River, such as the time a very large bear raided our garbage can late one night at Cloverleaf Campground while we observed its antics from just a few away out of our camper trailer window.

But by far the most exciting event (perhaps disturbing would be a better word) was the day at the campground when our son, Bill, then about 5, disappeared.

He was only gone for perhaps 45 minutes, but those 45 minutes were perhaps the “longest” space of time my wife and I had ever experienced.

We were staying at one of the campground’s rental cabins located on a low bluff above the river. I had gone down to the river for a late afternoon swim, and Bill had followed me down.

After a brief dip, I emerged from the river to find that Bill, who is developmentally-disabled, had disappeared. I figured that he had just gotten tired of waiting for me and had decided to go back up to the cabin.

But then my wife, Judith, came down to the river and asked where Bill was. We were both mystified, and the longer we scoured the area and called for him without result, the more alarmed we became. The foremost fear on our minds, of course, as that he might have tried to follow me into the river and that I had escaped seeing him.

Mike McLaughlin, a disabled Navy World War II veteran who then ran the campground which had been established by his brother, Mac (who taught school in Warren), came to the scene of our futile search for Bill.

“Well, we had better get out the canoes,” Mike said, rather ominously, referring to the boats that were stored in a nearby building that could have been launched to broaden the search for Bill to the river and its nearby shoreline.

No sooner had Mike said this, a car approached us that had been driven down into the campground from Route 62 above.

“Is someone looking for a little boy?” the woman driver inquired through the open passenger side window of her car, motioning to Bill who was seated next to her.

We cried “yes,” and when the car door was opened, Bill, of course, ran to his very relieved mother.

The woman explained that she had a cabin at the end of a long string of cabins that line the river north of Cloverleaf. The lost and crying Bill had been walking along the access road that serves those cabins when the woman rescued him.

When we pass that point today on our canoe rides from our Althom cabin, Judith always remarks that she can’t believe that Bill had walked so far up the river from Cloverleaf. He hadn’t been wearing the glasses he needed for nearsightedness, and this probably added to his confusion.

Bill’s problems could probably be tied to the circumstances that surrounded his birth 47 years ago, and expert medical opinion I have received supports this.

I recall sitting next to Judith’s bed at Youngstown’s now-closed Northside Hospital that early September day when she was in the early stages of labor and kept asking whether her obstetrician had been informed that she was in the hospital, as he hadn’t yet stopped by.

I went down to the nurses’ station a couple of times to inquire whether they had contacted the doctor. The nurses assured me that they had.

But it turned that although they had contacted the obstetrician, who was close to retirement, that he had forgotten the call. There had been no follow-up call by the nurses.

The doctor only realized that Judith was in the hospital when his office called our home to ask why Judith had missed a scheduled appointment to check up on her pregnancy. My mother-in-law told the caller where Judith was and why. The doctor then rushed to the hospital, broke Judith’s water, and had her taken to the delivery room. (I missed all this as I, who was certainly to quite blase as what was going on, had gone out for a walk.)

It was hours and hours later in the very early morning when the obstetrician, wearing a quite bloody smock, came down to me in the waiting room to congratulate me at the birth of a “fine baby boy.”

Today, Bill has been on a decent plateau in his life for some years. He lives in a very adequate group home, an adult care facility not far from where we live and often stops by our home for breakfast. He uses a monthly pass to get around on the local bus system, and thanks to a Youngstown program sponsored by a local benefactor for the disabled works one afternoon a week at a downtown candy store near City Hall.

Due to the fare at his group home, he has become an expert on local fast-food restaurants.

But his education was a very difficult process, and he has not benefited at all from having received a high school diploma.

In one futile effort to provide Bill with a more secures future (in which a local minister played a key role), we sent Bill out to Los Angeles to take part in a California work and residence program aimed at helping the handicapped and developmentally challenged individuals.

The program didn’t work out well for him as the need to adjust to an entirely new environment was too extreme and he came home afflicted with Tourette’s Syndrome. (But he had shown his capability at using the Los Angeles bus system on his own, however.)

Those afflicted with Tourette’s are apt to shout profanity when under social stress, and until Bill recovered from this setback, taking Bill out in public was a problem.

But all this is behind him (and us) now and Bill, as the saying goes, “is doing as well as can be expected.”

With his bus pass, he has little trouble of getting out and about to visit a friend and to come home at will. He watches lots of sporting events on TV and enjoys his radio. He occasionally swims at the YMCA.

Bill has a brother, Jamie (aka James), just fifteen months younger, who was born before we knew what a difficult time would have to raise a child with a developmental handicap.

Jamie learned easily and made many friends. It was not easy for Bill to find friends his own age.

The pediatrician we had chosen who had eight children himself told us that all children were different and led us to believe that things would work out just fine if we would only quit worrying. Unfortunately, he did not advise us to take Bill to Easter Seals, which had very good classes for children with varying disabilities.

And when Bill finally was steered in that direction, things became much less trying. When we realized he could not see well without glasses, it also made things easier when he was fitted with a pair.

Bill is not an outdoors person, unfortunately. He seems quite satisfied with his small circle of interests and activities. He quit going with us to our cabin on the Allegheny several years ago, as, for him, there was “nothing to do” there. (We do not have TV at the cabin.)

He certainly did not take to the kayak we bought for him, as the current would often leave him stranded along the shore or on shallow beds of rock when he would follow us on canoe outings. We would have paddle back to his location and instruct him on how to get out of his plight.

Thanks to Bill’s ineptitude in a kayak, I have now taken over as the principal user of what was Bill’s craft (and thus may well be the oldest kayakers to ply our stretch of the Allegheny).