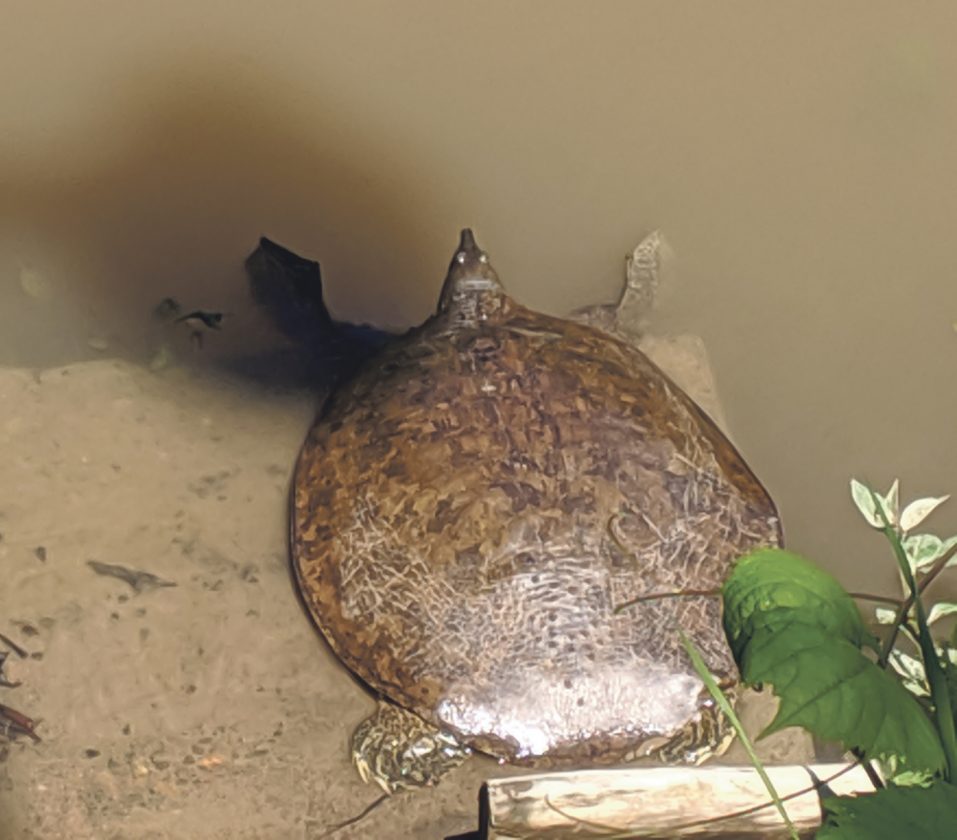 Times Observer photo by Lorri Drumm An Eastern Spiny Softshell Turtle used a platform at the bottom of a staircase that leads to Conewango Creek as a resting spot last Saturday as the creek waters receded from recent rainfall.

A few weeks ago, as I was trimming weeds around my yard, a neighbor called from her patio to alert me that she had seen a large snake in the yard. She described it as a water snake. Not a surprise, I suppose, living along Conewango Creek.

I turned to the ever-reliable Google search to find out the submerged groundhog was actually a muskrat.

Just when I thought I’d seen my fair share of aquatic wildlife, within a couple of weeks anyway, another visitor left me saying “Cowabunga!”

A friend peeked over the staircase that leads to the creek and exclaimed, “A turtle was down there! It just dove in the water. It was really big!” 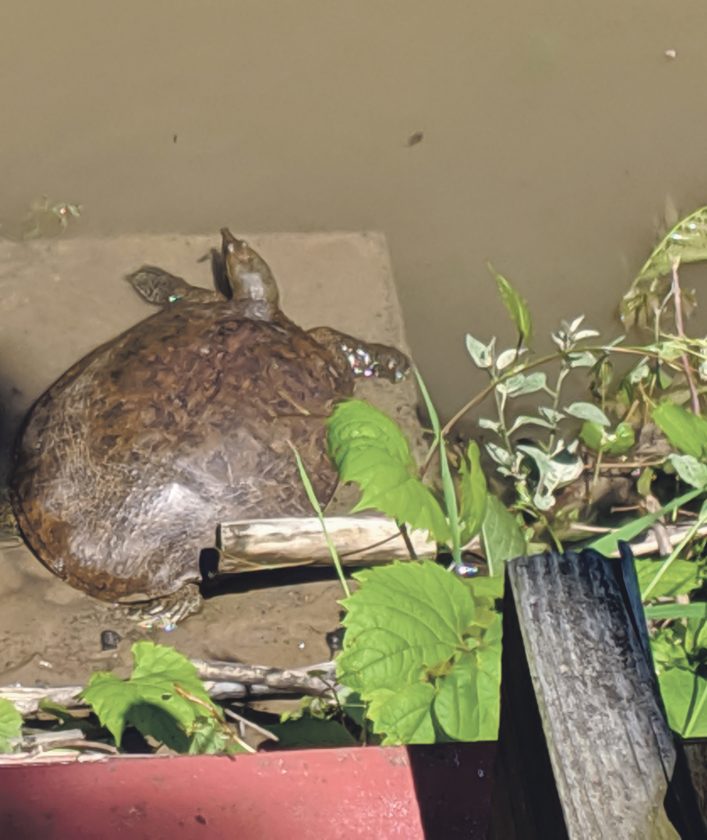 Times Observer photo by Lorri Drumm An Eastern Spiny Softshell Turtle used a platform at the bottom of a staircase that leads to Conewango Creek as a resting spot last Saturday as the creek waters receded from recent rainfall.

After my friends left, I decided to take a peek for myself. It was back and it was pretty big.

The staircase has a large platform at the bottom. On a typical day, I can sit on the platform and my feet don’t reach the creek.

However, the recent monsoons actually covered the platform. By last weekend, the water had gone down just enough to give “Michelangelo” (my favorite turtle name of the ninja variety) a place to stay wet and enjoy the sunshine.

Michelangelo sat quietly, moving up to the edge of the platform so his flippers could flutter in the water. Every once in a while he stretched his long neck and somewhat-pointy nose around to survey his surroundings. He gave me lots of time to take photos and even some video.

Again, I turned to some acquaintances and the trusty Google to determine that Michelangelo was not a hero in a half-shell, but, in fact, a softshell.

To be more specific, he is an Eastern Spiny Softshell Turtle, according to Sarah Hatfield, education coordinator at the Audubon Community Nature Center in Jamestown, N.Y.

Turtles of this type are fairly common to Conewango Creek, Hatfield said. And forget the stereotype portrayed in “The Tortoise and the Hare.”

“They typically bask on the steep sides of the banks and you can often see the slides where they have slid into the water,” she said.

That long neck and somewhat-pointy nose that I observed come in handy, according to Hatfield. “Their snorkel noses allow them to be almost completely hidden while they breathe,” she said.

It didn’t occur to me to even attempt to touch Michelangelo, but apparently, his shell isn’t as hard as it looks.

“Their shells are flexible, lacking the bony plates, and this gives them their name,” Hatfield said. “Around here, a lot of sportsmen call them leatherbacks.”

It turns out the name I gave my new acquaintance might need to change to “Michelle Angela.”