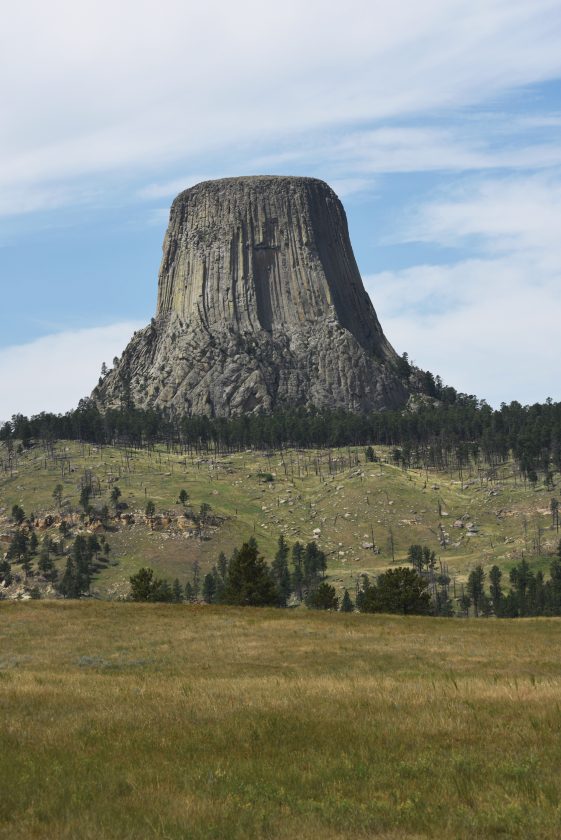 Photo submitted to Times Observer Devil’s Tower, in South Dakota, is an icon of alien visitation since ‘Close Encounters of the Third Kind’. It is spacey-looking up close. Be prepared to wait hours to get closer than this view during tourist season.

When I was very young, it was instilled in me to see the country. Ray Bimber, the man who more than anyone else was my mentor, crossed the United States a few times before the only roads for long stretches were ruts from the old wagon trains. There were no motels or convenience stores, so they camped and cooked on the open road. Fortunately he also was friends with some of the leading people in photography at the time, so he showed me many photos.

The Eisenhower Interstate Highway System we have today, and all of the modern conveniences along the Interstates, would have seemed unimaginably futuristic to Ray. The cross-country drive that would have taken him, probably, about a month now can be done in about 40 hours of driving. There still is a lot of adventure to be had on vacation road nonetheless.

For the past several years, Wife Jeri and I have done a lot of theme vacationing. To the greatest extent, we have toured Ancient Indian cultural sites. This was intensified by reading the excellent book ‘1491’, by Charles C. Mann, which presents much of the latest information about Pre-Columbian America. If your reading interests lean toward history, culture, wildlife and similar subjects, you will find a lot of great reading at Visitor Centers at our national parks, national forests, state parks and other public lands.

One of our first extended Ancient Indian cultural vacations was to the Indian Mounds of southern Ohio. Among the many Indian Mounds in this region is Serpent Mound, the largest serpent effigy in the world. It is about 3 feet in height, 20 feet in width and 1,348 feet in length.

Several things about Serpent Mound are strange. One thing you probably will not notice, even if you have a degree in geology, is that this unique mound is built on the edge of a meteor crater. This leaves on to wonder, is this mere coincidence, or did the builders know it was the edge of a meteor crater? By our understanding of the information and technology available to the Adena Culture in 300 BCE, it would not have been possible for them to know this. But did they?

Serpent Mound is surrounded by a park. The site has been designated a National Historic Landmark by the Department of the Interior. The manicured park provides maximum viewing of the mound. Trees are cleared from and immediately around the mound. It is mowed, and a trail follows the winding shape all around. Yet the serpent shape is difficult to determine without the pictures. A raised viewing platform situated at a key position provides a much better view.

From triple coils at the tail, the mound has seven large coils. The head of the serpent has an open mouth, inside of which is an oval that may represent an egg. It is constructed of yellow clay and ash, reinforced by a rock layer and covered with soil.

All of Serpent Mound conforms to the lay of the land.

Various parts of Serpent Mound have lunar alignment. The head and oval are oriented to the summer solstice sunset. Coils are aligned to the two annual solstice and two annual equinox events. It may have been designed for both solar and lunar purposes.

This does point very convincingly toward Ancient Indian culture that is very different from that which most Americans have believed since Europeans first started settling in the Americas.

Each succeeding Ancient Indian cultural vacation has revealed more surprises. The pre-history of America is much more interesting than most Americans can imagine. It is a topic we will revisit.

Jeri and I readily admit that we are Ancient Aliens fans. Going out to look at some of the supposed evidence for visits by aliens in the distant past has exposed us to a more open minded viewpoint to the possibility, maybe probability, that Earth has been visited by Star People.

Photo submitted to Times Observer Devil’s Tower, in South Dakota, is an icon of alien visitation since ‘Close Encounters of the Third Kind’. It is spacey-looking up close. Be prepared to wait hours to get closer than this view during tourist season.