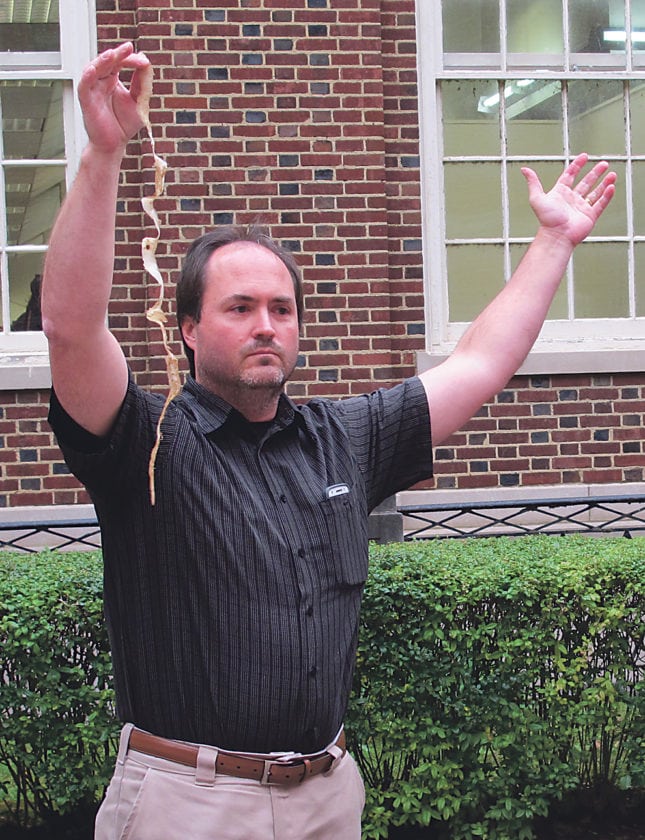 When you don’t have the expertise to fall back on, sometimes you have to cheat.

No, wait. That was in my younger days and before I had children who might read about me cheating in the newspaper.

… sometimes you have to work harder and/or smarter.

Three years ago, Jim Goodling and/or Pat Evans asked me to participate in the kick-off event for the United Fund Torchlight Campaign. There was a contest involving a food item.

It’s a good cause and the best way for my participation is through my stomach. So, I agreed.

I was a little disappointed to find out I would be preparing food, rather than eating it, but it was too late to back out at that point.

So, I became a competitive potato peeler. It did not go well.

Two years ago, not caring one whit that I wasn’t good at peeling potatoes, they invited me back.

I took a close look at the bylaws (there weren’t any) and decided on a course of action. I would chop my potatoes into little skinless blocks.

It worked. There were cheating allegations, but no real charges. The ‘skin’ had been ‘removed’ from my ‘potatoes.’ That I removed 60 to 80 percent of each potato with the skin was immaterial.

I was declared ‘fastest peeler.’

Last year, I couldn’t come up with a creative new way to game the system despite spending whole minutes surfing ‘potato peeling’ videos at work. The fastest methods seem to involve power tools. I am plenty dangerous with hand tools. So, I just went and lost. Badly.

This year, my dedication was renewed. I took a bag full of tools to the event. I had my favorite peeler, a sturdy and sharp knife, a hefty fork, a large band-aid, a cordless drill (I wasn’t sure I’d be able to plug in during the competition), and a hammer.

The drill was just for show. I didn’t even take any bits.

The hammer… I wasn’t so sure it wouldn’t come in handy. It didn’t. I left it on the table the whole time.

But, the other implements I used to advantage.

I’m no match for a former home ec teacher in a fair potato peeling fight.

And, I tend to injure myself when I try to peel potatoes for speed (or use power tools).

This time, my minutes of video searches at work showed me a fast and safe method.

I lopped the bottom off of each potato, jammed the fork in the flat spot, and peeled like crazy while holding the fork — safely away from the slicing zone.

I might have come in a not-distant third place if I had kept going. But, once I heard the ringers to my left were done, I focused on another competition category.

It was too late to try to be efficient. I had been cutting off generous portions of each potato prior to peeling. No chance there.

I had planned ahead for the possibility that I would again be the tortoise to Phyllis’ hare and that she would not take any foolish breaks. She’s more of a ‘fast and steady wins the race’ peeler.

The last potato in my crate was the largest. When I saw I would not be crossing the finish line in first, I carefully carved deep into that fist-sized potato. I sheared off more than half of its exterior in one long peel, turning at top and bottom three times.

(It just now occurred to me that I probably should have just gone around the smoothest part of the thing instead of making turns at the pointier ends. I guess the pressure got to me.)

Anyway, my peeling was the longest, with a good three inches to spare over second place.

I am happy with my ‘rubber ball globe on a mini traffic cone’ trophy.

And this may sound like sour grapes, but I don’t really want to be responsible for the potato-shaped tureen (won by Phyllis again) for a whole year.

I didn’t hurt myself at all… until I reached into my bag o’ tools after the competition and found the blade of my knife with the palm of my hand.