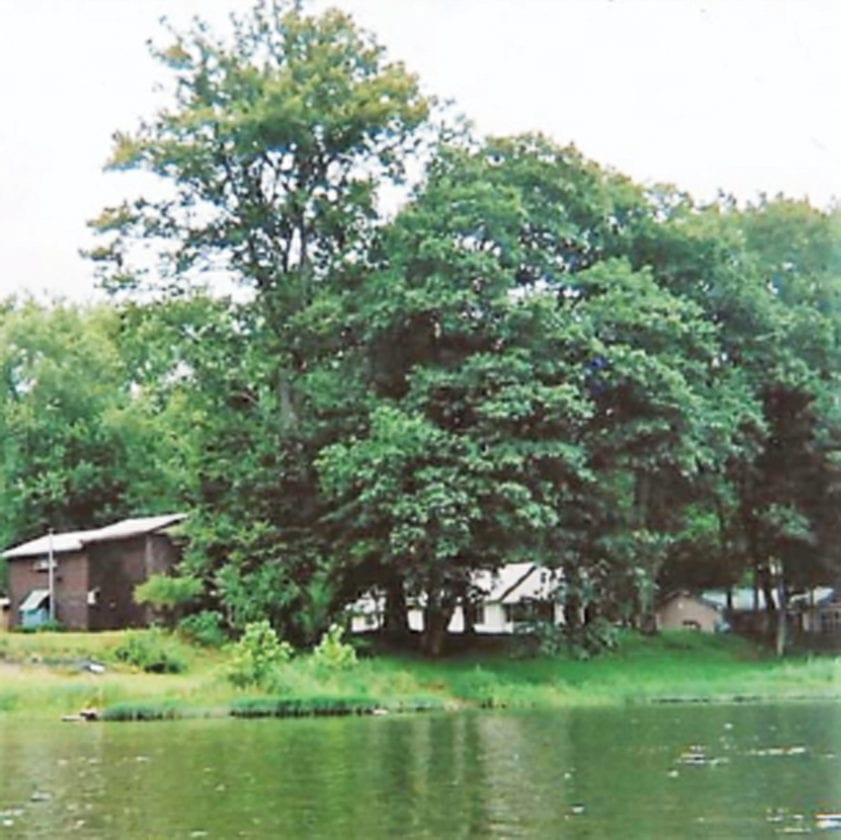 Linden, or basswood, tree towers over Stanger cabin on the river.

There were two very large trees on our 50-foot-wide lot bordering the Allegheny River when we acquired the property some 25 years ago.

There is just one now.

Our oak had two fatal flaws. It tilted out over the river, so its foliage weighed heavily on its trunk. It was also heavily decayed within, something that was very apparent after it crashed down.

We should have known that the tree was doomed, as a pileated woodpecker kept appearing at its base, hammering holes into the trunk in search of grubs. 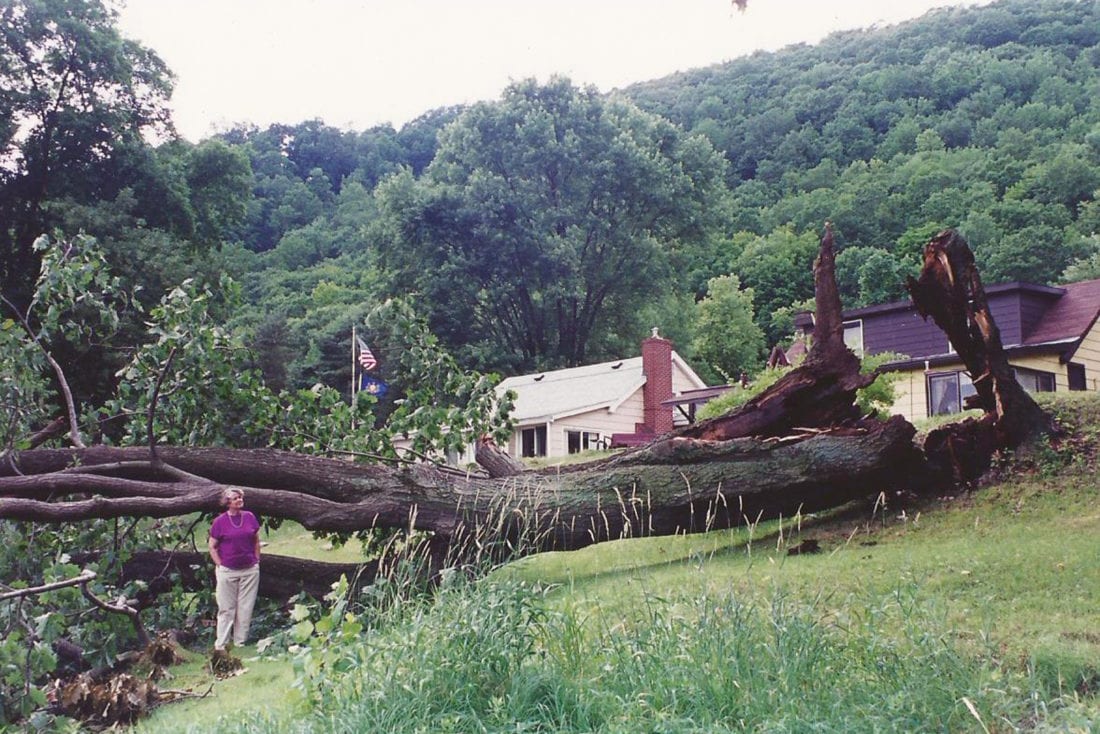 Photos submitted to Times Observer Judith Stanger standing next to fallen oak tree 20 some years ago.

One June morning I was asleep in a second-floor bedroom that overlooks the river when I was awakened about 5 a.m. by a loud “crack” coming from the tree. This was followed by a much louder crashing noise as the old oak hit the river.

Despite its internal decay, the old oak had been fully leafed out, and the weight of those leaves when made wet by the river’s early morning mist, coupled with the decay, proved fatal for the oak.

The wood was worthless, and the cleanup expensive.

The tree fell into the river and onto the shoreline of our neighbor’s property. At that time, Linda and the late Bill Shields, who had the grocery store in Tidioute, spent some time in the cabin they owned next to us when their children, Patricia and Brandon, were quite young. Fortunately for all of us, the tree fell at a time of day when the children were not apt to be down by the river in front of their cabin.

The large tree that is left on our lot is the only one of its type that I have seen along the river … or, for that matter in the entire area.

The American name for it is basswood, while in Europe the trees are commonly known as lindens.

The tree has apparently been growing on our river lot for a hundred, or even hundreds of years. Its canopy rises above the neighboring ancient oaks, and its girth is 10 feet or more.

We wonder who could have planted this tree. It must have been planted since, without any trees of its type in the area, it is very doubtful that it could have grown from a seed. Also, it is said that lindens (basswoods) are very difficult to grow from seeds.

We speculate that the tree’s planter may have been a German settler since the linden tree has quite a Germanic past.

One of the most famous thoroughfares in Berlin is Unter den Linden, a boulevard that runs from the City Palace to the Brandenburg Gate. The famous linden trees that once lined the street were lost to subway construction and World War II, but have been replanted.

In Europe, some linden trees have reached considerable ages. A linden at an arboretum in Gloucestershire, England, is estimated to be 2,000 years old. In the courtyard of the Imperial Castle at Nuremberg is a linden which, tradition has it, was planted circa 1000 by, the wife of Henry II of Germany the Empress Cunigunde.

Shields made of linden wood were carried by Germanic tribes, and Johann Strauss wrote the waltz “Unter den Linden” in 1900. It was a popular wood for sculpture in Germany from the Middle Ages onward. It is used for puppets and marionettes, and its acoustic properties make for it use in musical instruments, including drums.

The fiber from the bark of the linden tree has been used by the Ainu people of Japan to weave their traditional clothing. Recent excavations in Britain have shown that linden tree fiber was preferred for clothing there during the Bronze Age.

Our remaining tree, the basswood, or linden, has only one main branch between its base and its canopy.

It had another, a thick dead limb that arced out from the truck and over the roof of our cabin that worried me, given its apparent weight and poor condition.

So I contacted Kenneth Williams, a Tidioute tree trimming contractor, and after checking out the situation, he promised to remove the menacing limb early the following week.

It was about noon on the Saturday before Mr. Williams was to do the work that the limb went down just as I had walked in from the porch below it. It struck the edge of the roof and broke in two. The larger portion landed on cement block steps leading to the river, while a smaller portion hit perpendicular to the ground just off the porch.

If I had been standing within the arc of either of these falling limb sections, I probably would have been killed.

When I told Mr. Williams that the limb had come down on its own, he remarked, “Well, you just saved yourself three hundred bucks.”

Just recently, a large limb from the tree landed just behind me as I was pulling my kayak up from the river. I was standing in a narrow aisle between my parked car and the cabin. The limb hit on top of and parallel to the length of the kayak, missing my head by inches.

The impact on the kayak was so loud that Ron Morosetti, our neighbor from California, ran over to see what had happened. Both of us were amazed at the narrowness of my escape.

Despite the aforesaid, we are lucky our cabin is shaded by such a beautiful, towering tree, one that we can also point out to visitors is unique among the oaks, sycamores, maples, and willows that are its companions along the river and also on the river islands.

I thus shouldn’t mind having to rake up the blanket of fallen leaves the basswood deposits each fall on the lawn, or the numerous round seeds (along with acorns) that mice smuggle into the cabin before winter sets in.

We’re glad that the tree’s root structure appears very solid, given the battering the tree takes from the southern gales that frequently sweep up the river.

Linden, or basswood, tree towers over Stanger cabin on the river.

Photos submitted to Times Observer Judith Stanger standing next to fallen oak tree 20 some years ago.