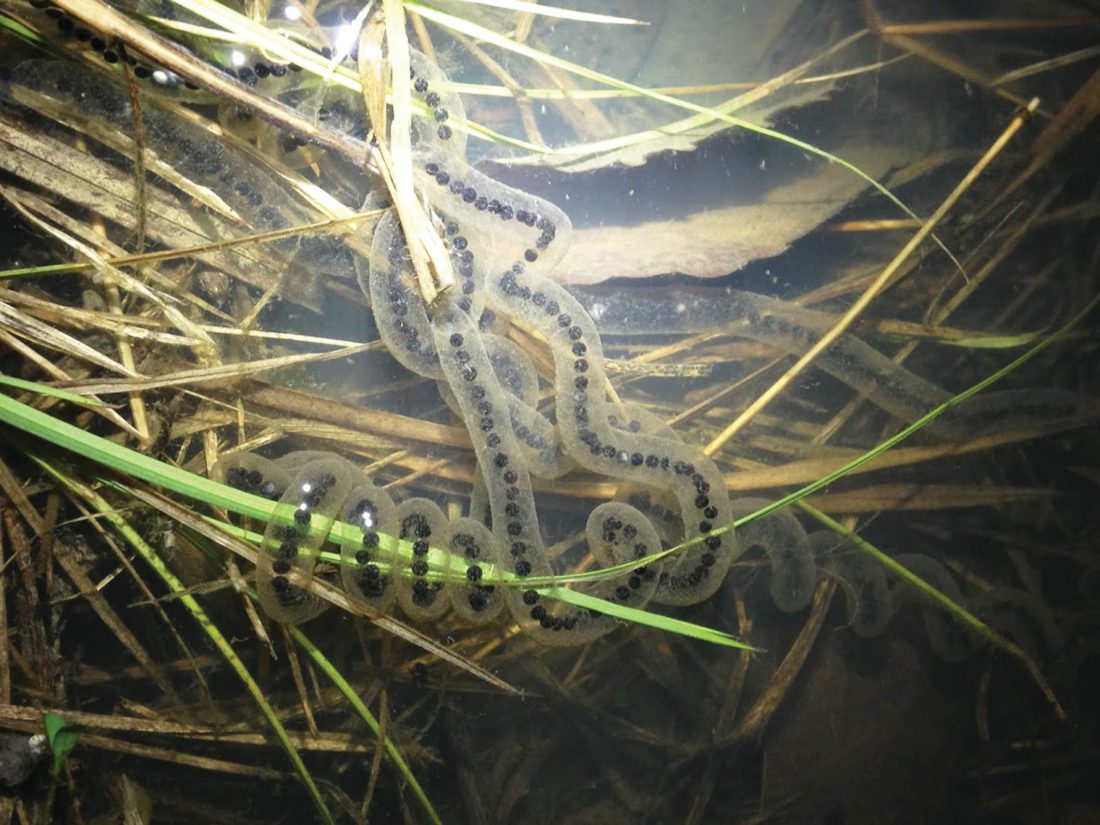 Photo submitted to Times Observer A strand of toad eggs curled around plants in the pond. Photo by Margaret Foley.

This past weekend I participated in a two-day hike with the Quest Backpacking Program, a backpacking program for eighth graders from Fredonia, Cassadaga, Brocton, and Silver Creek middle schools. There are so many reasons why I love participating in this program, but one of my favorite parts is that I get to spend during my favorite time of the year outside hiking, camping, and enjoying the spring flowers.

The great thing about participating in a program year after year is that I can now predict when certain plants and animals are going to appear based on when and where I have seen them over the years. The first Poison Ivy leaves usually appear during our one-day hike in late April, trilliums start popping on the two-day hike, and by the four-day hike in mid-May Jack-in-the-pulpits are everywhere. This year I discovered something new to keep an ear out for — American Toads.

We usually see American Toads as we hike, but this year we experienced them in a whole new way. Just as we were getting ready to turn in for the night we started hearing a loud trilling coming from the nearby pond. Naturally we had to investigate. As we got closer, we discovered the sound was coming from dozens and dozens of American Toads swimming along the edge of the pond. We watched in awe as the toads filled their throats with air and started trilling. We continued to hunt for movement along the outside edge of the pond and found not only more toads but the long, spirally strands of eggs they left behind. The next morning we returned to the pond to show the rest of our group what we had discovered. The number of egg strands had doubled, maybe even tripled in number since we had discovered them the night before.

While most of the eighth graders have probably seen a toad before, I was curious to see what they actually knew about them. When I asked them what the difference between frogs and toads were one little girl replied, “Well frogs like to swim and toads don’t.” Close, I guess, but not quite.

Frogs and toads are both amphibians and are both members of the order Anura, which means they are closely related and have many of the same characteristics. In general, true frogs have smooth, moist skin and large back legs that help them jump away from predators. Toads, on the other hand, have short back legs that they use to crawl or take small hops and their skin is rough and bumpy. While a lot of people think the dark bumps on a toad’s back can give you warts if you touch them, these “warts” just help the toads blend into the forest floor and aren’t contagious at all.

In general toads can tolerate and live in drier habitats, but, just like frogs, toads require fresh water to lay their eggs. On warm, spring nights the males will crawl into ponds and streams where they will use their trilling songs to attract a mate. If successful, the female will lay thousands and thousands of eggs that are fertilized externally by the male.

While seeing and hearing the toads may have seemed insignificant at the time, we were extremely lucky to experience what we did. For us to be camping just below an actively breeding pond was fortunate. While I’ve seen American Toads and their eggs countless times, seeing them actually lay their eggs was a first for me.

Even after observing the toads and finding their eggs I still had questions. How long can the strands of eggs be and how long before the eggs hatch? Once they’ve hatched, how long does it take before the American Toad tadpole is fully developed and ready to leave the pond? After they’ve left the pond how long do they live?

According to the University of Michigan, the curly strands of American Toad eggs can be anywhere from twenty to sixty feet in length and they usually hatch after three to twelve days, depending on the temperature of the water. After spending forty to seventy days as little black tadpoles, tiny toadlets emerge from the water. In the wild the lifespan of these little amphibians varies from two to fifteen years, though most die before they even leave the water. In captivity they can live for much longer. The oldest known American Toad was thirty-six years old before it was accidently killed. Scientists believed it could have lived to be fifty.

Margaret Foley is a Naturalist at Audubon Community Nature Center.