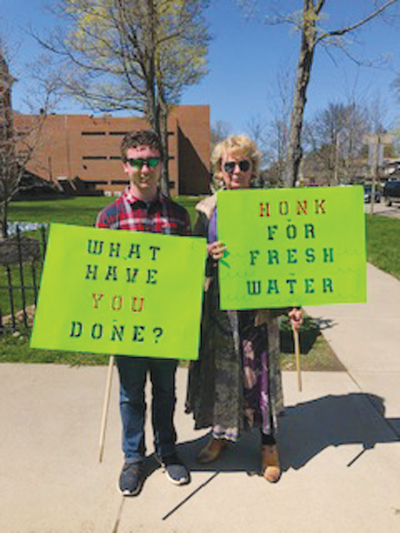 The first Earth Day was in 1970. The movement began in elementary, high schools and college campuses all over the country. It is now observed internationally in close to 200 countries.

I vaguely recall my very first Earth Day at Lander Elementary sometime in the 80’s. The whole school celebrated by planting a tree. Each year it was something different, but it was always…I wouldn’t say a BIG deal, but…big-ish.

It was also at Lander where my first opinions on littering were formed. In short, littering was bad. People who litter were bad. Living out in the countryside made it very easy to understand the meaning of “keep Pennsylvania beautiful.”

After living in Pittsburgh for a few years, the first time I returned home to Warren I noticed that I hadn’t seen the stars in awhile. I understood the concept of light pollution.

So, clean streets and parks, fresh air, clear skies; these were considered fundamental values before I moved away and discovered that it was not that way everywhere.

Fast forward to 2019 and I return to a Warren with most of the values I remember still intact. Clean streets and parks? Check. Littering is still bad.

Last month’s global student climate strike brought out the only Warren area student who came out to participate in what was generally seen as a mass movement in most parts of the world.

It didn’t come as much of a surprise that some might be compelled to poke holes in the growing climate change movement. The US oil industry was totally born here. The livelihoods of literally every person in the US depends on it both directly and indirectly. To say we live in the heart of the country is more than just a metaphor. This is blood we’re talking about. No wonder it’s a touchy subject.

The contradiction between the relative silence of Warren County with the worldwide climate change movement and my own personal very Warren County specific environmental values suggests to me that many have found it necessary to compartmentalize some of our values.

Poll anyone on littering and the response will likely be unanimous disdain, while many of those same people might likely scoff at the idea of solar, wind or some alternative energy source one day replacing fossil fuels.

At the core of these issues is a human survival instinct. On one side you could see the economy as we know it crumble and the world descended into chaos by adopting the “Green New Deal.”

On the other you could see a future where there is no clean water and the world descended into chaos as wildfires, tornadoes and hurricanes make less and less of our planet habitable.

Both scenarios are scary. Is it really necessary for the two to be mutually exclusive?

The people who discovered the oil and developed the industries that built the world as we know it today were pioneers. Key to the survival of our ancestors was that they were able to recognize challenges and innovate ways to overcome them. Comfort and convenience are relatively modern concepts thanks to them.

I like to think if those pioneers were around they would recognize the challenges we face today and step up. We are very comfortable and no first world country knows otherwise…yet.

I understand the motivation behind the worldwide youth climate strike, particularly the initiative of Storm Sivak of WAHS. I understand the desire to tap into the legacy of pioneers.

Warren County with all of its carbon dioxide scrubbing, oxygen producing trees could very well be just as much a part of the solution if our industries were indeed ever a part of the problem.

This past Earth Day, as promised, Storm Sivak mounted another climate change demonstration at the Warren County Courthouse. This time he was joined by classmates, family and members of Indivisible Warren.

According to Sivak they had nearly 600 waves and honks of support compared to merely 30 at his March demonstration.

Sivak feels strongly that Warren County could set a strong example. With the Allegheny River, the Allegheny National Forest as well-known tourist destinations, it’s more than just our values that need preserving.

“The main thing that I would like to see the people of Warren do is take pride in their city and the natural beauty around them.” Sivak said. “Not every place has the rolling Allegheny Mountains, the Allegheny National Forest, and the 2017 Pennsylvania River of the Year Allegheny River. Go out, plant a tree, take a walk, listen to the birds, and think about how different Warren would be without the beautiful nature around us.”

Arguing is pointless. The time will come when humanity will once again need pioneers to forge a brighter and safer path into the future.

If it’s not going to be us, it will be someone else.

Dave Ferry is Night Editor and Paginator with the Times Observer.