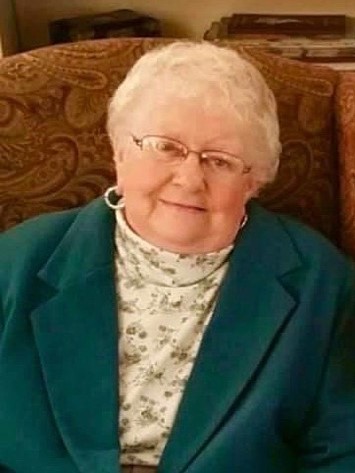 Sally Irene Marino, wife, mother, nurse mother, grandmother, friend, advocate and angel to anyone who was ever the beneficiary of her kindness in this world, was called home to her final resting place in Heaven, on June 23, 2020, dying of natural causes at Warren General Hospital, after a residency of several months at the Rouse Home.

She was born July 3, 1935, to August and Martha (Reilley) Bova, and grew up on Beech Street in Warren, in the same house that was home to Bova’s Barber Shop. She graduated from Warren Area High School in 1952, and from there, headed to Erie, Pa., to train as a nurse at St. Vincent’s Nursing School. She often recalled, in subsequent years, Sister Rose Evelyn, and what a hard case she was in judging hospital bed corners. But Sally was born to the profession, and knew it was her calling to be a caretaker. It was in an elevator at St. V’s, during her time in nurse’s training, that she met Anthony Carl Marino, who was working as an orderly part-time while he attended classes as a student at Gannon University in Erie. The two became friends, and then fell in love, marrying on May 31, 1958. They lived in Erie for a year, before moving to Warren, initially, so that Sally could care for her father-in-law until the time of his death. At the same time, they began their own family. As their family grew, their family by association grew, as well, and Sally was a friend and confidante to many friends, to her children, as well as to her children’s friends, as they grew up and into young adulthood. Sally was an advocate, and always ready with a plan to help someone who needed it to get to their next step. She was tireless in her efforts to help anyone who needed it.

Sally’s career as a registered nurse spanned from Warren General Hospital in the pediatrics and obstetrics wards, to private duty, and finally, to the Warren State Hospital Geriatrics Ward, from which she retired in 1990. She continued, though, as a resource for nursing info, to her kids, to her friends, and to anyone who asked (sometimes even to those who didn’t). She was a nurse, through and through, and putting the concerns of other before her own needs was common practice for her.

Her faith in Jesus Christ, her Savior, informed and guided her life. She was a lifelong parishioner of St. Joseph Roman Catholic Church, in Warren, a member of the Cursillo community in the Erie Diocese, as well as the Spirit of Christ Charismatic Community in Warren.

Sally is survived by her husband, Anthony, with whom she celebrated a distanced 62nd wedding anniversary (given COVID nursing home restrictions) just last month on May 31; as well as by her children: Anthony “Tony Jr.” (Lisa), Youngsville, Marie Driscoll (Michael), Lewisburg, Pa., Barbara Williams (Barry), Santa Monica, Calif., and Kathleen Marino-Brown, Warren. She is also survived by her grandchildren: Sarah Marino, Ryan Marino, Michael (Katie) Driscoll, Madeline Driscoll, Matthew Driscoll, Aaron (Amber) Zuck, Alexandra Brown and Addison Brown; great grandchildren: Sophia Driscoll, Josephine Driscoll, Shaina Lynn Critzer, Lennon Isabella Critzer and Braelee Rose Zuck. She delighted in their talents, their thoughtfulness and in being their confidante. She considered herself to be their forever friend. Many nieces, nephews, along with great- nieces and nephews, whom she loved dearly, also survive her.

In addition to her parents, she was preceded in death by her sisters: Barbara Kerr Hubbs and Elaine Salerno; as well as by her twin brothers: Paul Bova and Peter Bova.

Memorial donations may be made to St. Joseph Catholic Church, Warren, The Dementia Society of America (https://www. dementiasociety.org/), Our Lady of Victory Charities (olvcharities.org), Lackawanna, N.Y., in memory of Sally Marino, or to the charity of your choice. E-mail condolences may be sent by visiting www.lewis funeralhomeinc.com

While we mourn Sally’s passing from this earthly realm, we know the angels are rejoicing, for she is among them now.