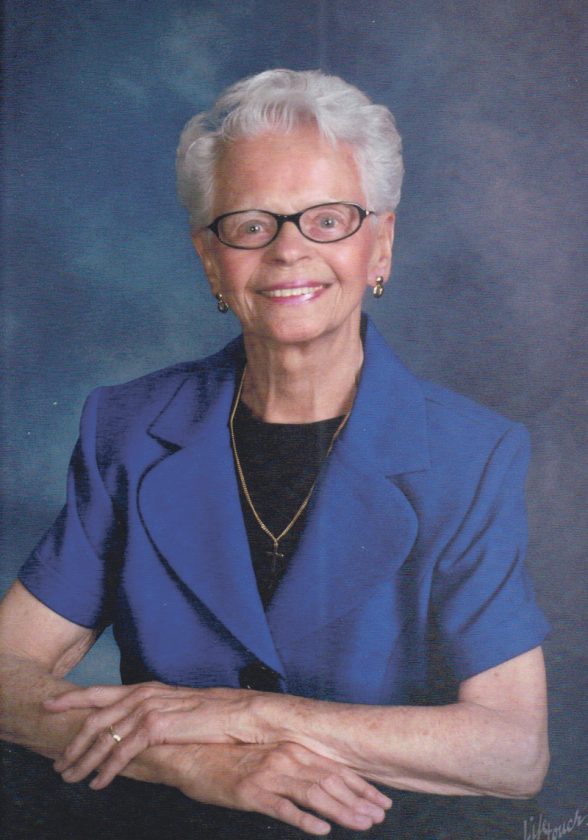 Bonny was born on April 10, 1925, in Warren, daughter of Gilbert F. and Agnes C. Johnson. She was a lifelong resident of Warren County.

Bonny graduated from Warren Area High School in 1943, where she was a Junior Class Officer, drum Majorette and active in Acapella Choir. For many years Bonny studied voice and piano at the Warren Conservatory of music and was a frequent soprano soloist. One of her very special memories was when she sang at the Elks memorial service on December 7, 1941, Pearl Harbor Day! Bonny was a 60year member of Trinity Memorial Church, where she taught Sunday School and sang in the choir. Later in life she became a member of the First Presbyterian Church in Warren and the Presbyterian Church Ft. Myers Beach FL, where she and Bud both attended for two years. Bonny attended Grove City College for two years and then was employed as a payroll clerk for the Bell Telephone Company for five years. In 1969 she went to work at the Warren County Court House as a secretary and retired after 14 years.

On August 27, 1949, Bonny married Lewis (Bud) Jones. they were married for 64 years and spent many happy winters in Ft. Meyers Beach FL. Bonny was very proud of her home, which she and Bud lived in for over 60 years. For many years she and Bud made Christmas cookies and candy to give to their surrounding neighbors. Also, they went were among the first couple to enjoy cross country skiing in Warren.

In addition to her parents and her husband Bud, Bonny was preceded in death by an infant daughter in 1950; her son, Gilbert D. Jones, in 1992; her baby brother, Thomas Gilbert Johnson; and another brother, C. Dudley Johnson, who died in WWII.

The family has requested that memorial donations be made to the Rouse Home, 701 Rouse Ave, Youngsville, PA 16371.

There will be no visitation or public services.