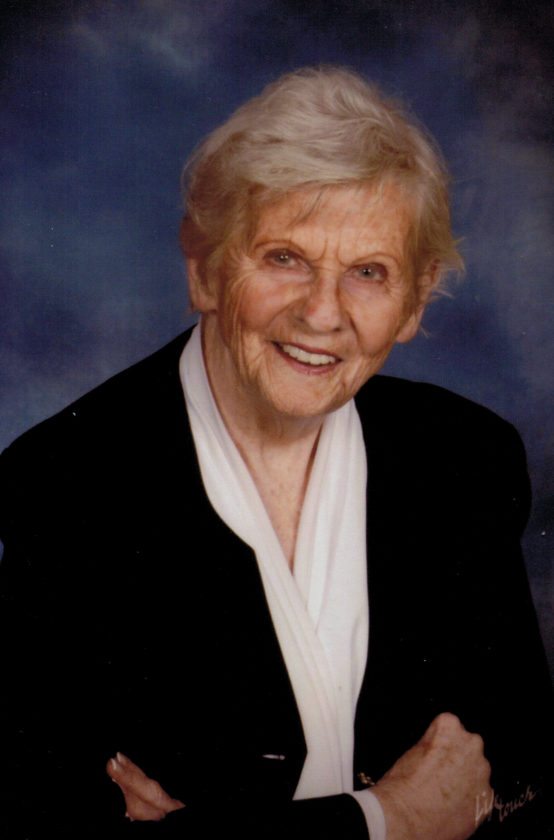 A pioneer for successful women executives and business owners in the Warren area, Janet C. Templeton passed away on Sunday, November 12, 2017, at the age of 91.

She was born Janet Irene Cannon on April 27, 1926, in Indiana, Pennsylvania, the daughter of Ida Montgomery and William Hooker Cannon. The family moved to Warren within a year of her birth. Her father owned Brown’s Boot Shop in downtown Warren for several decades. Her mother was a housewife raising Janet, her older brother Joseph, and her younger sister, Nancy.

Upon graduating from Warren High school in 1944, Janet enrolled at Westminster College in New Wilmington, PA where she earned a liberal arts degree in 1948. She moved to New York City and began an engaging career as an administrative professional at the corporate offices of Sylvania, Inc. Family health issues prompted her to return to Warren in the early 1950s, and she took a position as executive director of the YWCA.

Although they grew up within a few blocks of each other and both attended Jefferson Elementary School, Janet’s relationship with George Daniel Templeton Jr. did not begin to foster until her return to Warren. They married on Nov. 8, 1952, and had four children, George Daniel “Dan” Templeton III, Tracey Ann Templeton-Hill, William Montgomery “Monty” Templeton and Andrew Wiltse Templeton.

For two decades, Janet committed herself to raising a family, becoming involved in school, church and community activities, and occasionally holding part-time employment including substitute teaching. She was the last substitute teacher at Plank School Warren County’s last one-room schoolhouse in Watson Township which closed in the early 1970s. Her family remembers children from the inner cities and exchange students from foreign countries sharing many summers with the family.

As the 1970s began, Janet decided to take some night classes to keep her mind focused. Offerings were limited, and she chose real estate as her subject matter. As she neared the end of the course, a classmate suggested she consider selling real estate. Her husband was a well-respected funeral director in Warren, and the thought of launching a career as a woman in her mid40s seemed distant. Yet, she accepted the challenge and sold real estate for two firms before opening Janet C. Templeton Real Estate in 1976. Her sparse office on Third Street east of the Warren Post Office consisted of two rooms only because state law mandated a separate room for handling real estate transactions.

The firm took hold and grew rapidly. By the 1980s, Janet C. Templeton Real Estate had affiliated with ERA a national realty entity. The firm boasted more than two dozen sales people in a maze of offices in the Third Street building. She became active in the real estate trade group in Warren County, as well as the Pennsylvania Association of Realtors and the National Association of Realtors. Long before the internet, she brought revolutionary marketing innovations to Warren real estate and formulated ways to sustain and grow the business even during lean economic times. She pioneered name recognition advertising and earned a reputation for treating people fairly, respectfully and honestly. There was no property or customer too big or too small.

Her family remembers that the Janet C. Templeton Real Estate telephone never went unanswered. She personally made sure people got complete answers to their specific inquiries or other real estate needs whether it was at night, over a weekend or during a holiday.

Although few people knew it, Janet fought breast cancer in the early 1990s with virtually no interruption to her business. She was a quarter-century survivor at the time of her death.

Janet retired from being a real estate broker in the early 1990s but maintained her appraisal business out of her home well into the 21stcentury, finally retiring at age 85. She and her husband traveled the world while also making time for family and friends. The family had a summer home at Chautauqua, New York, for more than 40 years where children and grandchildren alike experienced many cultural, educational and recreational opportunities. Janet loved Chautauqua.

On the home front, real estate work meant frequent moves for the family. The houses grew larger until the nest grew empty. Janet and her husband bought a small weary house in a quaint Warren neighborhood that was originally constructed in 1824. They installed modern amenities including a kitchen that was featured in modern living publications — while maintaining the home’s simple original charm. In this sense, they were early devotees of downsizing and historic preservation in Warren. Good health and a perfect design for elderly living allowed her to remain in her home until a week before her death.

In 1975, she became the first woman to serve on the Warren County School District Board of Education.

In later years, she proctored at the Crary Art Gallery in Warren until her health began to wane in early 2016. She loved the game of Bridge, and was always up for a day of cards with the ladies or gents.

At the time of her death, Janet was a member of the First Presbyterian Church of Warren where in the past she had been involved in the Sunday School Department, Presbyterian Woman’s Association and Sanctuary Choir.

From a family perspective, Janet was a caring mother who provided for her children and their friends, even while her career was escalating. A sign in her kitchen read “Try Our Famous Peanut Butter and Jelly Sandwich,” and she made thousands of them. A nearby piece of artwork conveyed a passion for her children’s independent success and happiness: “There are but two bequests we can make to our children the first is roots and the second is wings.” All four children have had successful career paths in their own right thanks to those beliefs.

The family will receive friends on Saturday, November 18th, 2017 from 11:00 12:30 at First Presbyterian Church of Warren, 300 Market Street, Warren, PA, in Memorial Parlors. A celebration of her life will follow in the church sanctuary. The Donald E. Lewis Funeral Home has been entrusted with all arrangements.

In lieu of flowers, memorial contributions may be made to Hospice of Warren County who gave our mom peace in her last week of life, First Presbyterian Church of Warren, Struthers Library Theatre of Warren, the Crary Art Gallery, or a charity of choice.

To all who knew her, Janet provided a quiet, but firm confidence that endures in the many people who she directly mentored, as well as those who benefitted from her business skill, integrity and her respectful well-worked efforts to open doors for Warren-area women. Her roots will run deep in her family and the community for many years to come. Her wings have now carried her to a higher place.