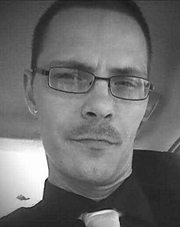 Jamie was a graduate of Jamestown High School and had been employed by Fancher Chair in Falconer. A proud and amazing father, Jamie loved spending time with his kids and attending their sporting events. He had a great sense of humor and always had jokes. He was also an Ohio State fan, and also enjoyed the Chicago Bears and the Bulls.

Friends will be received at the Peterson-Blick Funeral Home, Inc. 1003 Penn. Ave. E., Warren, on Saturday, November 4, from 12 noon to 1 p.m., at which time a funeral service will be held there with Rev. Loretta Knapp, pastor, officiating.

In lieu of flowers, memorial contributions may be made to cover an education fund for Jamie’s children C/O Jennifer Haer, PO Box 311, Warren, PA 16365.