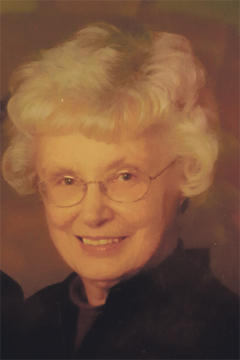 Ruth Bengtson Thelin, age 85, of Millcreek Twp., passed away Friday, April 14, 2017 at ForestView surrounded by her loving family. She was born in Warren, PA on July 23, 1931, the daughter of the late Bertha (Lilja) Bengtson and Carl Bernard Bengtson. During her high school years, Ruth worked at S.S. Kresge Co. as a clerk and as an accompanist for violin students of Helen Eckhardt Olson. Later she was employed parttime at Warren National Bank. After graduating from Warren H.S. (1949) she worked as a bookkeeper at Warren National Bank until 1955. She studied organ with Carroll Fowler (’64’65) and served as organist at St. Paul Lutheran Church in Warren from 19651977.

After moving to Oil City in 1977, she worked at the law firm of McFate, McFate, and McFate. She was also a substitute organist at Zion Lutheran Church in Oil City.

After moving to Erie in 1984, she served as accompanist for the TLC Singers (Trinity Lutheran Church “Tender Loving Care” Group) presenting programs to nursing homes and senior centers for many years.

From 19841990, Ruth served as accompanist for Carol Wright, soprano. The programs were called “Songs for Folks” and consisted of a variety of classical arrangements of folk music, presented in the Erie area, Pittsburgh, and various locations in NW, PA for a total of 75 programs.

Also during that time, she was a member of the Bell Choir at St. Paul’s Church Lutheran Church in Erie, first as a ringer, then as an accompanist; presenting programs in church and various community locations. Also through the years, she was a member of the church choir, a faithful member of the Patchwork of Love quilting group, a substitute organist or pianist when needed, and accompanist for the Woman’s Club Chorus. Ruth had a strong passion and caring for people in their time of need and took them into her home.

Playing the service at Hessel Valley Lutheran Church in 1976 when the King of Sweden visited was a highpoint.

Ruth was also active in the Salvation Army Roadrunners Group, participating in many trips and outings.

Friends called at the DusckasMartin Funeral Home and Crematory, Inc.,4216 Sterrettania Rd. on Tuesday, April 18, 2017 from 2 to 5 and 7 to 9 p.m. and were invited to St. Paul’s Lutheran Church, 3108 Sterrettania Rd., Erie, PA 16506 on Wednesday, April 19, 2017 at 10:00 a.m. for the Funeral Service. Interment Hessel Valley Cemetery, Chandlers Valley, PA. In lieu of flowers, memorial contributions may be made to St. Paul’s Lutheran Church.