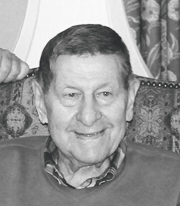 Richard Eugene Freeburg, 93, of the Rouse Suites passed away on Monday, February 20, 2017, at Warren General Hospital. Richard was born April 12, 1923, in Johnsonburg, PA. He was the son of the late Alfred and Mabel (Hagstrom) Freeburg.

Richard was a 1940 graduate of Kane High School, and served in the US Navy as a Gunner’s mate during WWII aboard a Navy rescue tug ship during the invasion of Normandy and later along the northern coast of France. It was while Richard was serving on the ATR3 (auxiliary Tug and Rescue) that the was witness to and helped rescue many drowning soldiers during one the worse Allied catastrophes in WWII, the sinking of the S.S. Leopoldville by a German Uboat on Christmas eve, 1944. Years later Richard contacted the Navy for the ship’s World War II roster and organized a number of ATR3 veteran reunions.

He was a member of the First Presbyterian Church, where he and his wife, Joanna were members of the church choir. Richard was known for his love of music and enjoyed being a member of the Warren Barbershoppers in addition to a lead performer in several musicals.

In addition to his parents, he was preceded in death on October 14, 2015, by his wife of 67 years, Rickia J. “Joanna” Freeburg, whom he married August 28, 1948; a grandson, Timothy David Bright on October 4, 2014, a sister Lauretta Freeburg Fredell and a brother, Robert Freeburg.

Friends will be received in the parlors of the First Presbyterian Church, 300 Market Street, Warren, on Friday, February 24, from 10 to 11 a.m. at which time a memorial service will be held with The Rev. Lee Beckes, officiating. Military honors will be presented by the Youngsville American Legion Honor Guard.

Burial will be in Warren County Memorial Park.

The Peterson-Blick Funeral Home, Inc. has been entrusted with arrangements. Econdolences may be sent by visiting www.petersonblickfuneralhome.com.