City seeking $12M for projects along banks of Allegheny River 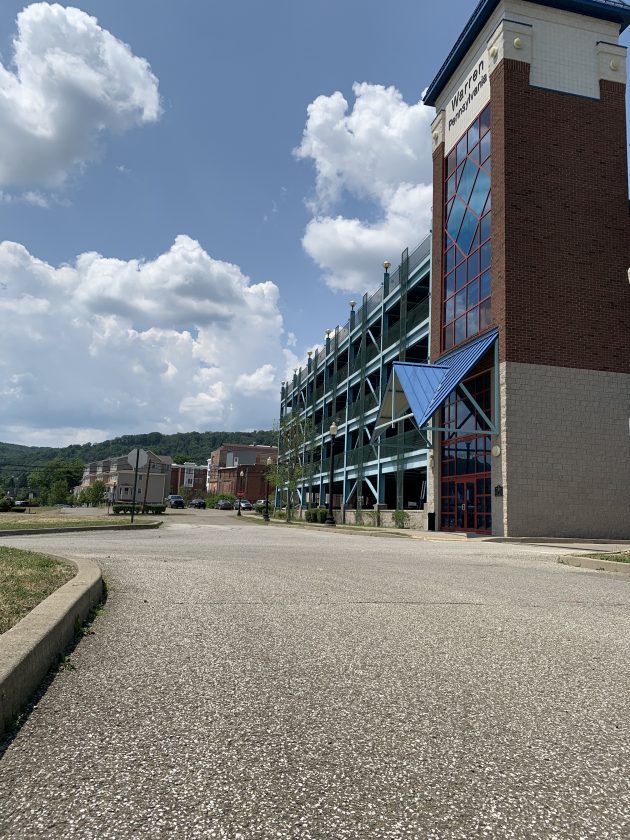 Times Observer photo by Josh Cotton This one-way street in front of the Clark Street parking garage would be converted to two-way traffic if a federal grant application filed by the City of Warren is successful.

The City of Warren is seeking $12 million in federal funding that would drastically overhaul the riverfront in downtown Warren.

The funding source is the federal BUILD grant program.

City officials note that the riverfront “has seen some redevelopment activity… however, it has not been redeveloped to its full potential.”

Arguing that the city is landlocked and that the state has awarded $1 million in funding toward the project in the Redevelopment Assistance Capital Program.

“One purpose of the project,” the application states, “is to reconfigure the roadways in the riverfront area to form a parcel large enough for a hotel with adjacent parking” and argue that “easy ingress and egress to the entire riverfront area will further enhance the ongoing redevelopment” happening in that area.

“The existing one-way street adjacent to the Clark Street Parking Garage will be widened to allow for two-way traffic,” the application states, noting that additional downtown parking would be created as well.

Streetscape improvements — items like sidewalks and lighting — “will be made along the new roadways which will connect the riverfront and the downtown areas.”

The project area is defined as the area between Clark St. and Langdon Dr. along Market St. to Pennsylvania Ave. and Liberty St.

That area is in a federally-designated opportunity zone but the city “lacks the money necessary to be a partner in any development projects which would benefit from this program,” per the application.

“Another purpose of the project is to improve the turning radius from Clark Street to Langdon Drive,” the application states. “Langdon Drive is indistinguishable from the adjacent ill-defined and unimproved vacant lots making navigation difficult for vehicular, wheeled and pedestrian traffic.”

The project also includes a “watercraft ramp” as a “connection to the river” and a new trail along the northern bank of the Allegheny River.

Staff highlight the need for a downtown hotel outlined in a 2017 feasibility study and argue the project will increase the tax base in Warren.

“Development of the Warren Riverfront would provide such anchor attractions and will draw people to the City,” they argue. “Warren’s economic development strategy recognizes that there is a gap in tourism amenities on the western side of the state. The investment in infrastructure will lay the foundation to build” on Warren’s proximity to the Allegheny National Forest, water trails and parks and playgrounds “thus diversifying the local economy.”

They point out that “despite the number of boaters that pass by the city each year as they float the river, not many stop to enjoy the downtown waterfront as it is underdeveloped and there is no access point.”

The application notes that the project is “extensive” but would be the most significant federal investment in the area since highway and Kinzua Dam construction in the 1960s.

The timeline proposed — should the funding be awarded — would see the grant awarded in the fourth quarter of this year with construction from 2022 into 2024.

According to a memo from the U.S. Department of Transportation, Congress appropriated $1 billion “for National Infrastructure Investments.”

“Funds for the FY 2020 BUILD Transportation grants program are to be awarded on a competitive basis for surface transportation infrastructure projects that will have a significant local or regional impact,” the memo states.