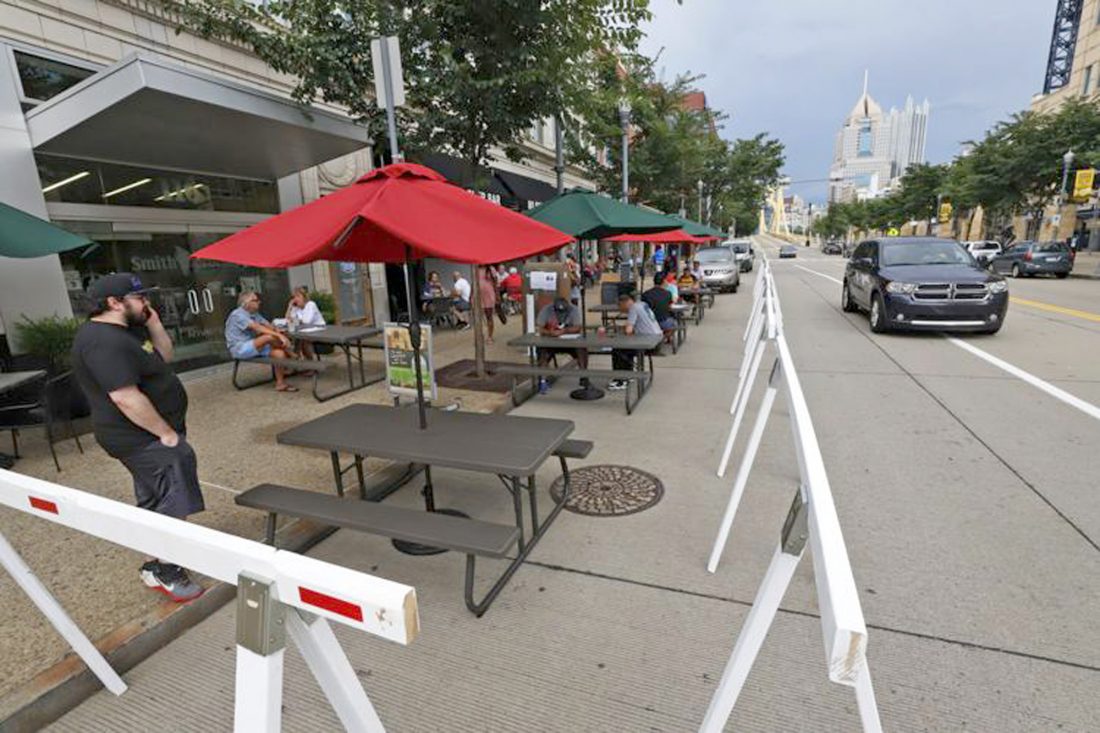 AP photo Additional outdoor seating extends into the street outside of Mike's Beer Bar on the Northside of Pittsburgh on July 12.

Restaurateurs said Tuesday that Pennsylvania’s statewide pandemic restrictions on their industry will force 7,500 establishments to shut down forever and leave more than 200,000 workers unemployed.

Unless, that is, Gov. Tom Wolf steps in to either roll back “arbitrary” capacity limits or support a bailout.

“As much as we hate to ask, we need financial assistance,” said Rui Lucas, who owns both Na’Brasa Brazilian Steakhouse and the Iron Abbey in Montgomery County. “The PPP (Paycheck Protection Program) loan program is over. The leadership in Washington is lacking. If we do not get grants or loans to pay our mortgages, employees and local taxes, we will not survive.”

Lucas’s sentiments aren’t unique. He and the owners of other establishments across the state gathered before the House Majority Policy Committee on Tuesday to illuminate the dire situation in which most find themselves since Wolf began restricting service at bars and restaurants March 17.

“Being down 20 percent at any time without assistance spells disaster,” said Mick Owens, owner of Mick’s All American Pub and the Maize Mexican Cantina in Lancaster County. “At that rate, I could not even cover my cost of goods, utilities or lease. … I wish that were the most depressing part of my testimony, but it’s not. We’ve had no income since the industry shut down.”

Owens said the administration’s decisions last month to allow outdoor dining and limit indoor service to 50 percent capacity helped rebound sales up to 80 percent of pre-pandemic levels, in some cases. Still, consumer confidence lags because of the blame public officials place on restaurants and bars for spiking COVID-19 cases.

“We need science based decision from our leaders,” Owens said. “We need an administration that penalizes the bad actors without making policies that crush the entire industry.”

“They are telling me how they are losing their houses and crying that they are having their life savings stripped away from them because of these regulations,” he said.

“I had one member that I was so concerned about that I referred to the National Suicide Prevention Hotline,” said Chuck Moran, executive director of the Pennsylvania Licensed Beverage and Tavern Association. “That’s how serious some of them are. They’re really desperate.”

“His measures could have been wielded like a scalpel, but he chose instead a machete,” Owens said.

John Longstreet, president of the Pennsylvania Restaurant and Lodging Association, said he could accept the Department of Health’s limits on the industry if he could see the data behind it.

So far, Secretary of Health Dr. Rachel Levine has declined to offer granular statistics about outbreaks linked to bars and restaurants – much to the chagrin of Republican legislators, long tired of the informational firewall between the General Assembly and the administration regarding pandemic mitigation strategies.

“The arbitrary number of 25 percent has no basis in science that we can ascertain,” Longstreet said. “The only significance of the 25 percent is that it will put restaurants out of business and employees on the streets.”

The association says some 25,000 restaurants employed more than half a million workers statewide before the pandemic struck. A recent Yelp analysis of closures nationwide estimates that 60 percent of establishments closed down temporarily will never reopen. In Pennsylvania, about 30 percent will fold permanently under the 25 percent capacity limit alone.

“By his own words, Wolf is targeting the restaurant industry although there is scant real evidence that entire industry is the problem nor the solution,” Longstreet said

Wolf has been a vocal proponent of federal legislation – the $120 billion Real Economic Support That Acknowledges Unique Restaurant Assistance Needed to Survive (RESTAURANTS) Act – to rescue struggling restaurants with grants for operating expenses. He’s stayed quiet, however, about bills in the Legislature that would provide up to $100 million in state aid to the industry.