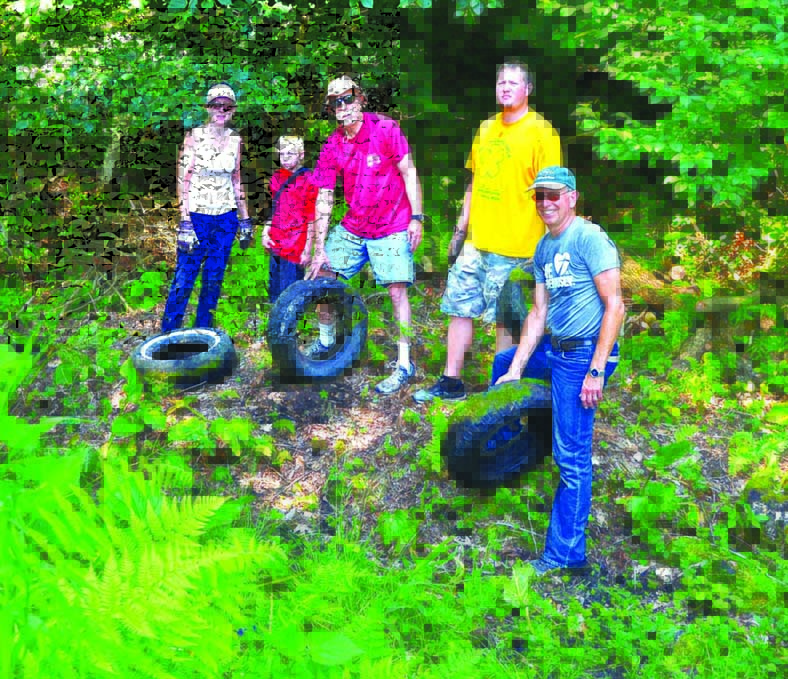 A clean-up event this week turned into a look back in time.

Wade Lewis, 9, and Kate and Don Reed, with the help of Craig King, Greg Burkett, and Tidioute Borough Council President Henry Brown, gathered up tires, a washing machine, “one very old football,” and a few pieces of junk for their efforts along the Tidioute Riverside Rec Trek Trail.

The Reeds and Lewis took a walk in the spring and located tires in the gully along the trail. “We found 15 to 20 tires, we think,” Kate Reed said before they began the effort this week.

On Thursday, they found more than they bargained for.

“The more we searched through the trees, the more tires we found,” she said. “We ended up with about 59 tires.”

One passerby had a possible explanation for why there were so many tires in that location.

“A woman walking her dog and pushing a stroller on the trail told me she had heard people in the 1950s used to push tires off the road up above, along the power line, to see if they could roll them into the river,” Reed said. “I was surprised the tires had been there for such a long time.”

Lewis, the Reeds, King, and Burkett lugged tires from the brush onto the trail.

Brown, using a front loader provided by the borough, hauled tires and the washing machine back up the trail to the trail head parking area at the Water Treatment Plant.

King and Burkett then drove the tires to Warren Tire Center in Warren where Owner Corky Fry had agreed to recycle them.

It was hot, sweaty work, with temperatures close to 90 degrees.

But, it was scenic place to spend the day when not looking at junk.

“The Tidioute Riverside Rec Trek Trail, about 4 miles long, is a lovely place to walk or bike along the river,” Reed said. “The eagle’s nest on the island is visible from the trail and there is a nice waterfall off one side.”

And there are now far fewer junk tires to draw one’s eye from the natural beauty.