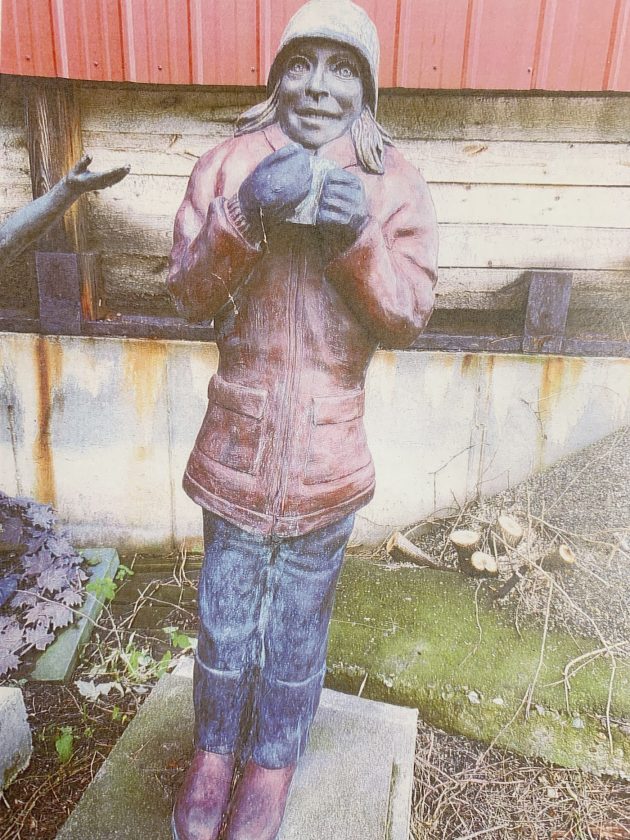 Photo provided to the Times Observer The City of Warren is storing a total of seven Dave Poulin sculptures at the Department of Public Works garage.

The City of Warren Street Landscape Committee continues to discuss what to do with several statues cast by sculptor Dave Poulin who died earlier this year.

The city is currently holding seven pieces of his work at the Department of Public Works garage.

DPW Director Mike Holtz recommended putting the statues together in a central location while committee member Mary Conarro has advocated for their spread throughout the community.

“One of the problems with these statues,” Holtz said, no one knows what they are “beside us civic-type people.”

Students wrote essays about the things they love to do in Warren County and the students with the best essays were the models for Poulin’s work. Poulin is best known for the “Scary Lucy” statue in New York State.

Initially placed at the respective elementary schools, the statues wound up in the office of the Main Street manager — back when the city had a Main Street program — for a couple years.

They were then split between two downtown parks — several at what is now the Art Kelsey Park on Liberty Street and a couple at Breeze Point Landing.

When the Liberty Street park was redone a couple years ago, they were moved to the garage. The plan was to place them around a healing garden at Crescent Park but that project has run into a couple funding hurdles.

Connaro said she’s received a few responses on the issue and recommended “bringing them back into the community and sharing the history.”

“My theory was to put them together and put a significance to them,” Holtz said.

“I kind of like the idea of them all being in one park,” Committee member Paula Bogart said. “I don’t really want a circle of them, just spaced out.”

A joke was then made about making sure the statues were spaced six feet apart.

Chair Josie Gerarde appeared to agree, noting that “if they’re scattered around, how do you find them?”

Conarro and Holtz both indicated that they would be seeking to determine who each statue was sculpted to represent.

City Arborist Joe Reinke said that over 30 tree planting sites are set for the fall and indicated he is hoping for 40 to 50 in total.

“(We are) going to hit that number no problem,” he said. “(We) don’t have to go begging for spots for the first time in a few years.”

Gerarde presented a couple of options for the planting in the middle of the roundabout set to come to the intersection of Pennsylvania Ave. and Market St.

Reinke noted city crews pulled out a cotoneaster from around the Four Flags on the bank of the Allegheny River, indicating it was tough to prune and is a “leaf catcher.”

“I think it grows quickly,” he said, indicating it is “low maintenance if planted in the right area. It is hearty. It takes over.”