Good for the heart 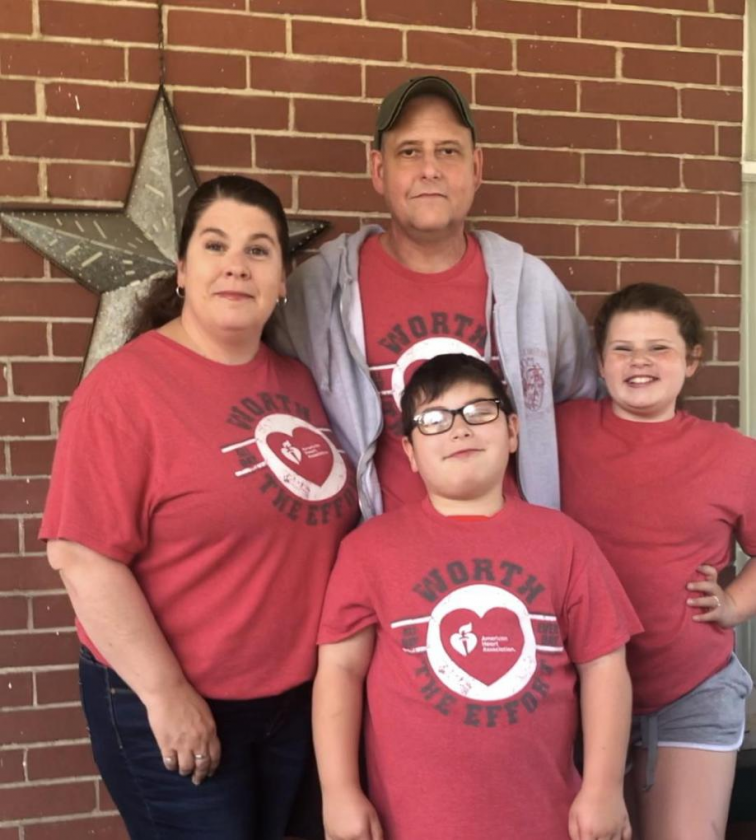 Photos submitted to Times Observer Joey, Brian, and Katimay Lutton pose for a photo in their American Heart Association shirts. Katimay was the leading fund-raiser in the Youngsville Elementary School Jump Rope for Heart event in each of the last two years following Brian’s heart problems that resulted in a heart transplant.

Some kids have more motivation than others during fundraisers.

Katimay Lutton of Youngsville Elementary School could point to a very good reason to raise funds for the American Heart Association’s Jump Rope for Heart events over the last two years: Her dad.

Brian Lutton was coaching youth baseball — his son Joey’s team — on May 15, 2018. After a visit to the mound, he was walking off the field.

He didn’t even make it to first base when he collapsed.

His heart stopped working properly. He had gone into ventricular fibrillation — vfib. 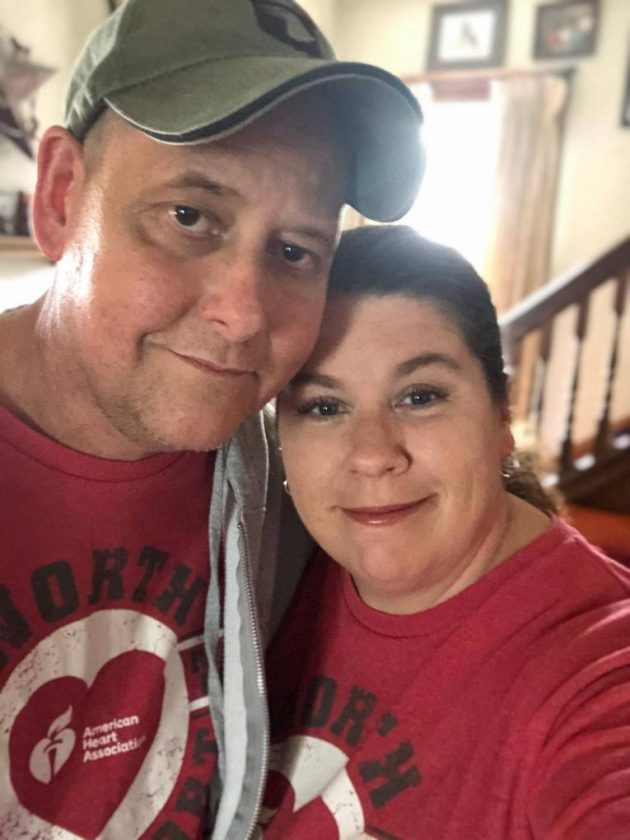 Brian and Barb Lutton of Youngsville pose for a photo at home after Brian’s heart transplant.

Exactly why is still not known.

He has been through a lot since then, but is currently at home.

Barb was not there when Brian collapsed. She was coaching volleyball at Youngsville High School a few blocks away.

“We had just a taken a break,” she said. 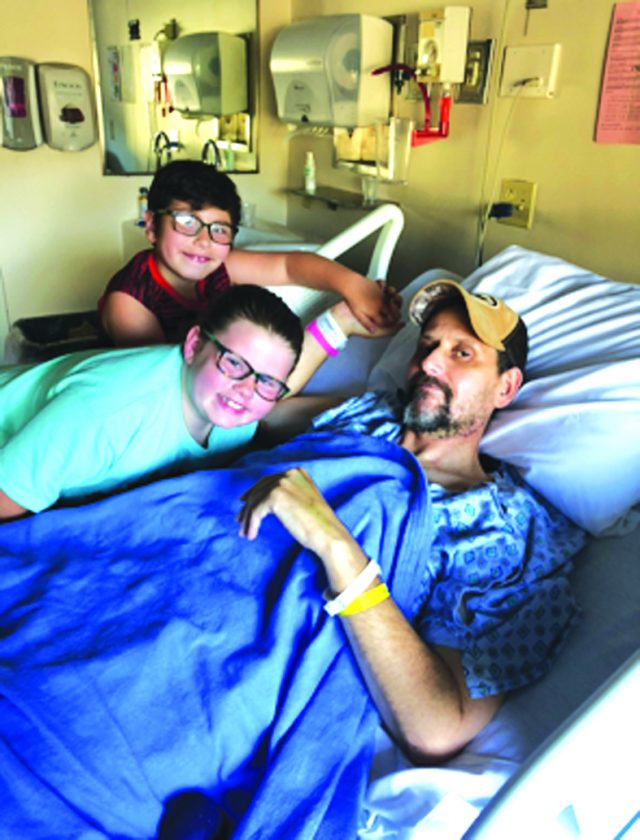 Joey and Katimay Lutton spend time with their father, Brian, for the first time after he had been hospitalized for 40 consecutive days after suffering a heart attack in 2018.

One of the players heard ringing. “I meandered over to my phone,” she said.

There was no meandering after she heard the news. “It was pretty terrifying.”

Their daughter, Katimay, was in Sheffield playing softball.

Despite the family be scattered, the timing was good.

There was plenty of help available at the ball field.

The baseball moms included nurses and first responders, Barb said. A member of the Youngsville Volunteer Fire Department was at home, heard the EMS call, and ran through his back yard to the fields.

“There were so many people in play,” she said. “We definitely feel God wants this man alive. The stuff he’s survived, it’s miraculous.”

Together, they kept Brian alive until an ambulance arrived.

Even on the ambulance and at the hospital, professionals had to work constantly to keep him that way.

“They shocked him eight times on the way to the hospital,” Barb said. “They’d get a pulse and then it’d stop.”

At Warren General Hospital, “They finally got a steady pulse after about an hour and 40 minutes,” she said.

At that point, he could be moved.

Brian was flown to UPMC Hamot in Erie.

After Brian’s heart was offline for so long, neurological damage was almost certain. And if doctors couldn’t find that he was still “in there” they might not have continued treating him.

But, he wiggled his feet, squeezed his hands, and opened his eyes at the right times.

A week later, doctors in Erie said it was time to move.

“We’re shipping him to Pittsburgh,” Barb said. “We don’t know what’s going on.”

In Pittsburgh, the news was even worse.

“I went down to the lounge to tell the family what they had just said,” she said.

But, the family wasn’t ready.

“We didn’t come to Pittsburgh to die,” Barb said. “We’ve had one miracle after another. There’s divine intervention.”

“God called in the consult,” she said.

A gastro-intestinal surgeon and a cardiovascular surgeon took a look.

One of the doctors heard that his patient was the father of seven- and nine-year-olds.

“I’ve really gotta save this guy,” he said.

They got to work.

It wasn’t that bad. A foot of Brian’s bowel was removed.

“They left him open,” she said.

Next, they went into his chest. After installing another type of pump in addition to the one that had been installed in Erie, doctor’s left Brian’s chest open.

“The next day, they did a neurological evaluation,” Barb said. “He was still in there.”

After that, Brian did well for a while. He had a pacemaker with an internal defibrillator, but it didn’t last.

“It wouldn’t expand enough because of the scar tissue,” she said. “If it can’t expand, it can’t pump the blood through the body.”

After a test in October 2019, doctors discovered that Brian’s blood flow was very poor.

He was evaluated for a heart transplant in November.

“They don’t give hearts to just anybody,” Barb said. “You have to be very thorough. We had to do a couple months of testing to be eligible to be listed.”

A few days later, she left Brian’s side. “It was March 18. I was trying to come home real quick to see the kids,” she said. “I’m 20 minutes outside of the city, Brian calls… we got a heart.”

He was in surgery the next day.

His chest was open and his heart was out before the new one was even in the building, Barb said.

The surgery was complete that afternoon.

Brian was in the hospital for a total of four weeks after that.

He hasn’t had many problems since then. “He’s had zero rejections so far,” Barb said.

He did develop a fever in June. Naturally, doctors wanted to rule out COVID-19, so he was tested for that. He was negative.

Along the way, family, many friends, and local churches and other entities have helped

“Our kids are such troopers,” she said.

In 2018, Katimay, was motivated to raise funds for the American Heart Association.

“She hit the streets here in Youngsville,” Barb said. “She would take it to church.”

Brian’s co-workers at SCI-Forest were generous. As were fellow veterans.

Including her $1,005, students at Youngsville Elementary School raised $2,383.04 and the AHA expressed its thanks.

“On behalf of the American Heart Association and the millions of Americans we serve, thank you very much for your school’s donation of $2,383.04. Families and schools are critical links in providing the foundation for cardiovascular wellness in our country.”

“By holding this event at your school each year, you raise awareness about heart-healthy living. And you help us fund more lifesaving scientific research and critically needed education efforts. Thank you.”

“She does it in honor of her dad,” Barb said. “I don’t know what she’s going to do next year.”

Her mother asked Katimay if she had anything to say… “Thank you for donating.”

Photos submitted to Times Observer Joey, Brian, and Katimay Lutton pose for a photo in their American Heart Association shirts. Katimay was the leading fund-raiser in the Youngsville Elementary School Jump Rope for Heart event in each of the last two years following Brian’s heart problems that resulted in a heart transplant.

Brian and Barb Lutton of Youngsville pose for a photo at home after Brian’s heart transplant.

Joey and Katimay Lutton spend time with their father, Brian, for the first time after he had been hospitalized for 40 consecutive days after suffering a heart attack in 2018.