Sawyer Mohney is the 2020 Student of the Year 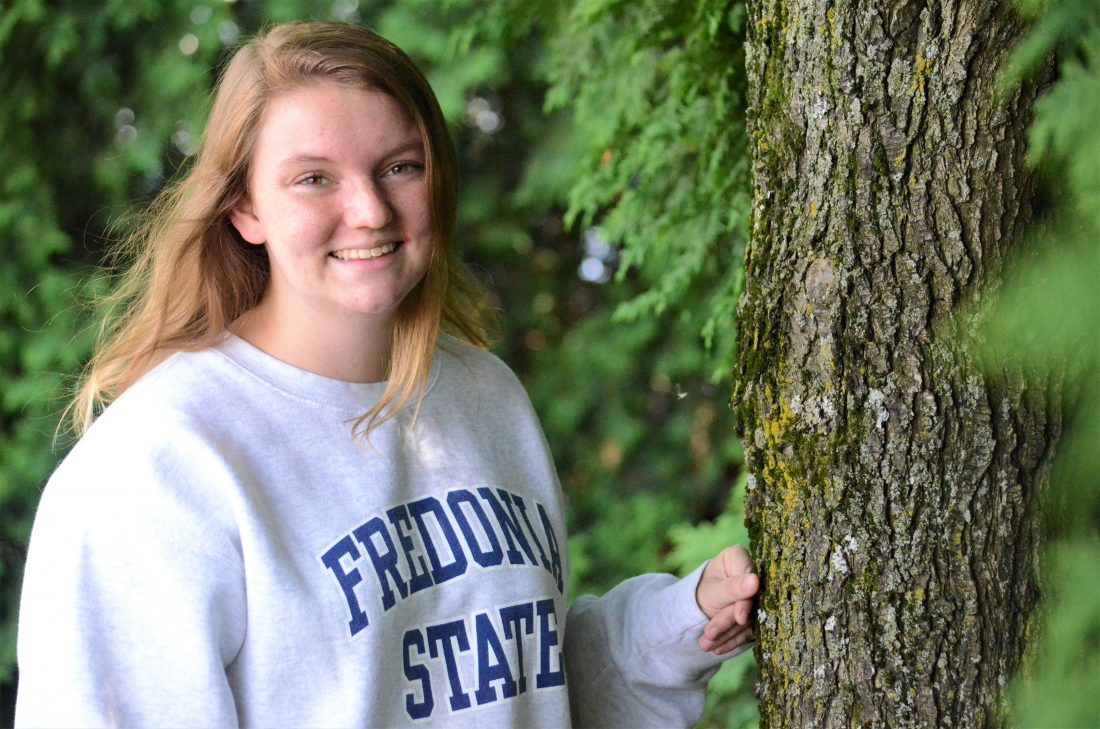 Sawyer Mohney is the 2020 Warren County Student of the Year. Times-Observer photo by Brian Ferry

For some students, it’s all about goals.

In Sawyer Mohney’s case, there were goals she set, goals she achieved, and goals she made.

Mohney, a 2020 graduate of Warren Area High School, is the Times Observer and Community Foundation of Warren County Student of the Year.

She graduated as salutatorian of her class and has already amassed 52 college credits.

Unlike some, she didn’t sacrifice her other activities to make a run at valedictorian.

Mohney is a several-sport letter winner, part of student government, competed in STEM events for seventh through twelfth graders starting when she was in fourth grade, reads Stephen King to help her sleep, plays fourteen musical instruments, has earned a black belt in taekwondo, and enjoys philosophy — particularly Kierkegaard.

As an Warren Area High School athlete, Mohney managed to participate in a half-dozen varsity sports, score points in playoff games, and was something of a pioneer in one of those sports.

One game she didn’t play was what thee GPA game — calculating a schedule that would give a student the best chance to be valedictorian.

“I definitely didn’t play the GPA game,” Mohney said, “I would have been in AP classes.”

In determining grade point average, Advanced Placement classes are weighted at a higher rate than other classes — including dual enrollment classes.

Instead of building the perfect schedule for that, Mohney worked hard in the classes she took at St. Bonaventure University through Warren County School District’s dual-enrollment program. “It was all trying really hard to get the best grades I could get,” she said.

The COVID-19 pandemic and associated schools closure did cause some concerns among top students in dual enrollment programs.

While her classmates — and competition — at Warren Area High School were out of school, completing application-based projects that were essentially pass-fail grades, Mohney and other dual enrollment students were working online through their regular curriculum. “We were really really worried with the COVID,” she said. “Everybody getting 100s? I was still getting grades.”

The decision to move to the dual-enrollment program was a natural one for Mohney.

She enrolled as a sophomore, splitting time between the Pine Grove Educational Center — St. Bonaventure’s Warren County dual-enrollment branch — and Warren Area High School during both her sophomore and junior years.

As a senior, she didn’t take any classes at the high school.

“It wasn’t really for me,” she said of the traditional high school experience.

“I had a hard time at the high school. The smaller class sizes and the challenge is that drew me” to dual-enrollment.

Portions of three years in dual-enrollment added up.

“I ended up with about 52 credits,” Mohney said. “I’ll go into college as a junior, hopefully.”

She plans to attend the State University of New York at Fredonia in the fall.

“I’m going to try to double major — applied math and accounting,” Mohney said. “I want to be an actuary.”

She credits Dr. Douglas Cashing, one of her math professors at St. Bonaventure, with solidifying her career goals. “It wasn’t until I was in his class that I figured that was what I wanted to do,” she said. “I was always trying to learn. I learned that I was into math.”

On top her double major, Mohney plans to add a chapter to her soccer career at Fredonia.

There are several entries in that book already.

“I play a lot of soccer,” Mohney said.

“I was at the fields a week after I was born,” Mohney said. Her older brothers — Hunter and Mason — were playing.

It took her a couple years to take the field. “I started playing soccer when I was three,” she said.

She played in the YMCA program, travel ball with Kinzua Soccer Club and MSA Soccer of Erie, and the Warren Area High School team.

In soccer, she was a four-year letter winner, but only three were with the girls team.

“I blew out my ACL, MCL, and meniscus at the end of my freshman year,” she said.

She couldn’t play as a sophomore, so she joined the boys team as statistician and earned a letter there.

Like siblings everywhere, Hunter and Mason compete with each other and with Sawyer.

“We were always joking around, ‘I have a better goal in my high school career,'” she said. “We all had a big goal.”

In the District 10 finals, Sawyer scored an overtime goal — a golden goal — to win the game, win the district title, and advance the team to the state playoffs.

After she fired the shot — from about 35 yards out — she expected it to sail over the bar.

“It dropped just right,” she said. “I can’t really top that.”

Her brothers haven’t conceded that they can’t either. “They won’t admit it,” she said.

Sometimes, kicking a ball over the bar was the goal.

The Warren Area High School football team was looking for a kicker. A friend asked if Mohney was willing to try out.

“I’d never picked up a football,” she said. “But, I always wanted to try it. I gave it a chance.”

“I was so nervous I think I went and kicked for a solid four hours the day before,” she said.

The soccer experience crossed over pretty well, and she could do the job better than anyone else. Mohney may have been the first female ever on the Warren Area High School football team, but she made the team on her skills, not as a novelty.

As a senior, in addition to handling extra points and some field goals, she had to take on kickoff responsibilities. There were limits. She didn’t have to make any tackles. After seeing her teammate, fellow kicker, and soccer player suffer an injury trying to make a tackle, the coaches “told me to run off the field,” she said.

The team made the playoffs in 2019. “Making it to playoffs last year was pretty major,” Mohney said. “I scored one point in that game. Every point counts.”

Mohney may not have started out with the goal of being a football player, but it became part of her.

“It was definitely an experience I wouldn’t trade,” she said. “I actually met a lot of cool friends.”

She found another opportunity to be with friends in another sport.

Mohney was a varsity bowler for two years — but not an especially good bowler. “It was always fun to have a sport I don’t really have to focus on, just be with friends,” she said.

She tried swimming, but it wasn’t a good fit. She lettered in track for three years before her COVID-shortened senior season.

As a full-time dual-enrollment student whose courses continued through the pandemic, COVID-19 didn’t impact Mohney as much as it did many students.

Still, “there’s definitely stuff that I missed out on,” she said. “I was just happy with everything the community tried to do to make it as normal as possible.”

The alternative to the traditional graduation was a good switch. “I loved going over the dam,” Mohney said. “I’d rather do that any day.”

It was a good change for her mother and their collective shedding of tears, too. “My mom struggles with the ceremonies,” Mohney said. “That was a little less somber. If I see her crying, I’m probably a crier, too.”

Her parents, BoSawyer Mohney is the 2020 Student of the Year

bbie and Denny, took an active role of constant and unwavering support in her activities, she said. That includes chauffeur — “always hauling me to soccer, driving me half-way across the country to go to games” and playing a role in her decision to attend Fredonia State.

Students in the Class of 2020 from all over Warren County applied to the Student of the Year program, submitting numerous pages of responses in hopes of being the recipient of the $4,000 scholarship.

A panel of Times Observer and Community Foundation judges went through each application. Eventually, those judges decided upon Mohney as the 2020 Student of the Year.

We expect she will be setting, achieving, and making goals for a long time to come.