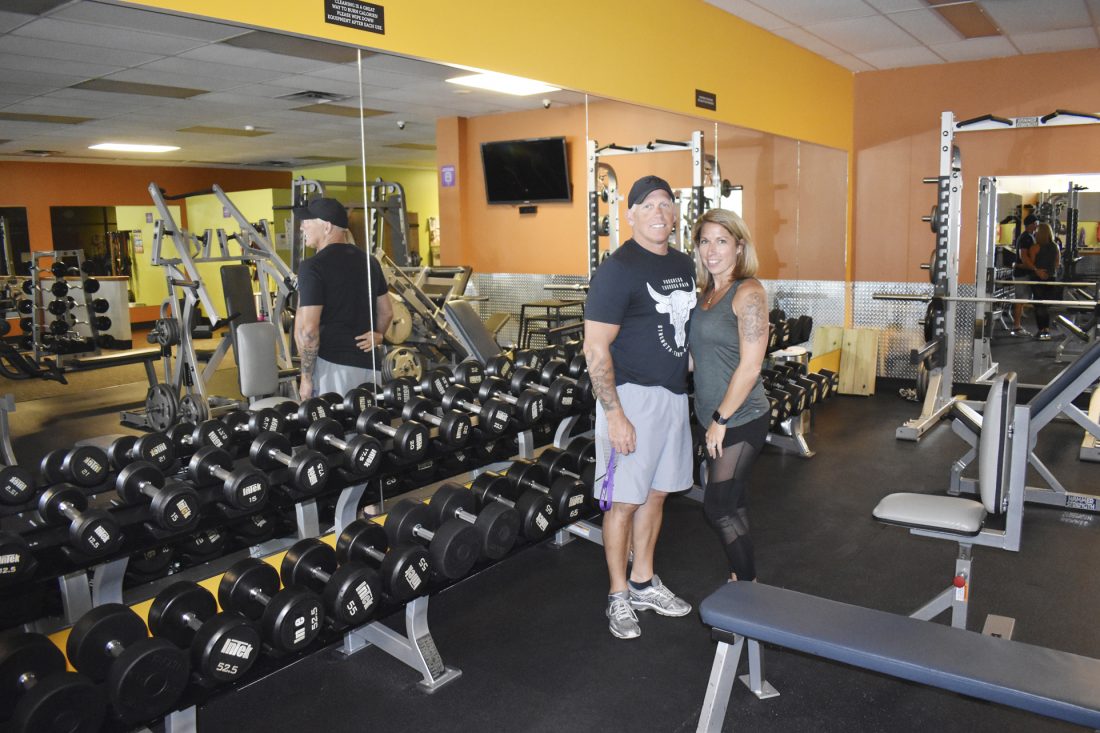 Photo by Eric Tichy Erica and David Dix, co-owners of Anytime Fitness in West Ellicott, are pictured Wednesday afternoon. The pair worry a lack of guidance from state officials could result in customers going to Warren County, where gyms have already reopened.

The owners of a local business not yet scheduled to resume operation under the state’s phased reopening guidelines are worried they might be losing customers to Pennsylvania where restrictions have been eased much quicker.

Erica Dix, who with her husband David own and operate Anytime Fitness in West Ellicott, said she is concerned other gyms in nearby Warren County that have begun to reopen under Pennsylvania’s own initiative will drive customers away.

Dix closed her gym March 16 in accordance to Gov. Andrew Cuomo’s NY on PAUSE plan to limit the spread of COVID-19. She stopped billing members April 1, and as a result has not received income going on three months.

“We’ve had members who are telling us how not working out has impacted their daily lives,” said Dix, who has owned the Anytime Fitness in West Ellicott for five year. “Working out is so good mentally and physically — it’s a stress relief for a lot of people.”

What’s not clear is when gyms and other fitness-based businesses will be permitted to reopen. It could come as soon as Phase Three begins, likely around June 16, or during Phase Four around June 30.

“It’s very frustrating not knowing and the unknown,” Dix said. “We don’t have answers to give members. We have reached out to Empire State Development, and to Gov. Cuomo twice with no response. It’s frustrating — I’m trying to figure this out.”

In the meantime, a lack of members has made paying the $7,000 monthly rent difficult; the pair also own another franchise in Amherst but have been given rent forgiveness for April, May and June at that location.

Dix and her husband applied for an Economic Injury Disaster Loan through the U.S. Small Business Administration. However, she said the money, $10,000, would be akin to a mortgage and not a grant that could be used for rent as she was led to believe. “We’re not going to take it,” Dix said. “It’s not going to help.”

Anytime Fitness is a self-sustaining business in that it can remain open without the need for employees around the clock. Dix said she and her husband act as the sole employees, while instructors recieve income from the classes they teach.

Because the state has not determined when fitness facilities will be permitted to reopen, Dix is concerned her customers — which include local police, firefighters and other first responders who work out at all hours — will turn to Warren County.

“In Warren County, which is 20 minutes to the south, the gyms are open,” said Dix, noting that at least a dozen people have begun traveling out of state to work out. What’s more, Dix is worried that when she does reopen, those customers who have turned elsewhere might not return.

“I’ve been watching diligently, researching every day if they’ve put out some kind of guidance (for gyms),” she said of the governor’s daily briefings.

Dix said she has completed a form required by business owners detailing a reopening plan.

She noted that her gym already requires members to wipe down equipment after each use, and that the entire facility is cleaned regularly.

The business will also have the ability, once reopened, to limit the number of members coming in each hour through electronic key fobs. Dix said members are being notified that once open again, the local Anytime Fitness will limit workouts to an hour in order to accommodate as many as possible. “We have to be fair to members,” she said. “They are more like family, and they have been very understanding.”

She later added: “We’ve always been big on supporting local businesses, especially when we bought our local gym. I’m born and raised in the area and lived here my whole life. … I haven’t step in Walmart during this, and it’s frustrating to me that Walmart can be open and Wegmans. I understand it’s food and they need to be open, but if they can have hundreds of people in there, why can’t a gym where there’s no contact?”