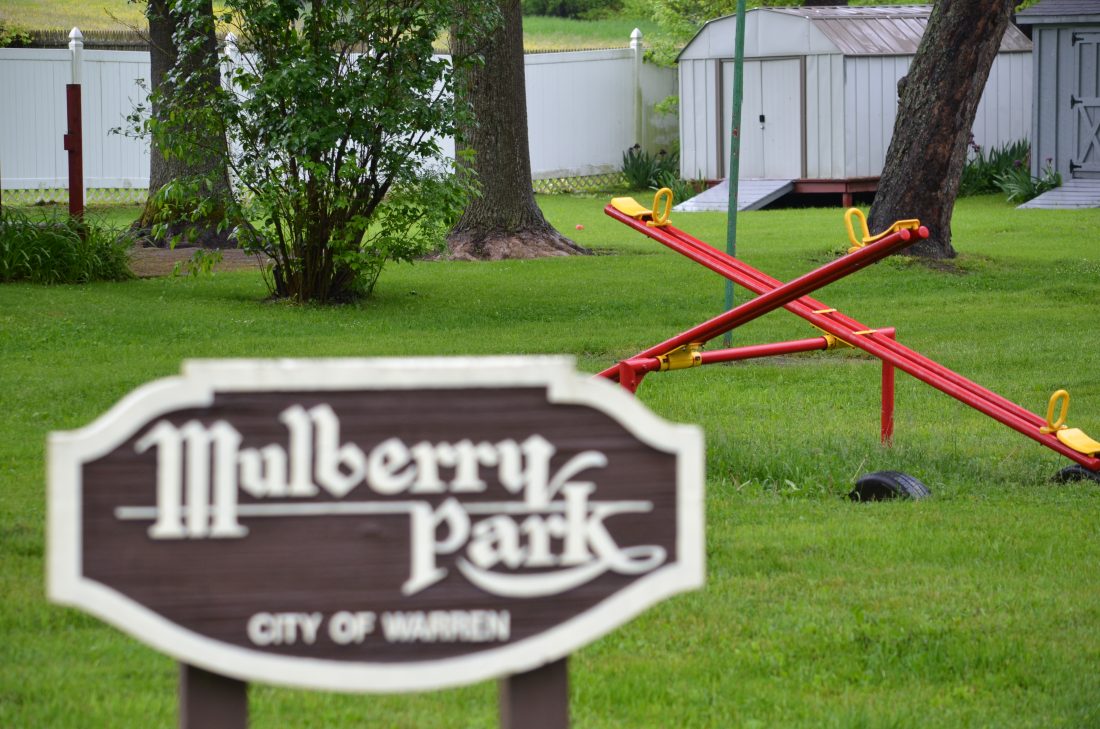 Times Observer photo by Josh Cotton Drainage and high grass concerns at Mulberry Park, while not a new problem, are back before

High grass and water concerns at Mulberry Park are now on the radar of City of Warren staff and the Parks and Recreation Commission.

“Since COVID-19 started, that playground has been busy every day,” Whittaker said. “Since the weather has gotten better, there are families over there” in addition to children and adults playing basketball.

She said she saw a young couple with a stroller with grass so high that they had to pick up the stroller and carry it.

“It’s the water problem and I just feel bad,” she said. “It’s become busy again and it could be a beautiful little park. The water issue has become apparent under the swings.”

Concerns were raised about potential insect and rodent issues from the water and high grass.

“It’s just gotten that bad,” Whittaker said, and is a “concern for all the neighbors. Maybe more attention needs to be paid to that little park.”

Whittaker and Mike Holtz, Department of Public Works director, concurred that water in the park wasn’t a problem until the elementary school was constructed on top of the hill above the park.

“It’s a concern,” Whittaker said. “I think there are safety issues now that need to be addressed.”

Holtz said that a prior estimate to address the drainage issues totaled a “couple hundred thousand dollars.”

He said city staff would “have to go back to the drawing board” and look at potential solutions.

Holtz said there was a pre-job meeting scheduled for Wednesday for the Lacy project and said there may be activity there in a couple weeks.

At Crescent, Holtz said staff are working on moving grant funds around “toward Crescent Park to help get that project up and going.

“That one isn’t quite a go yet,” he said, indicating a fuller update would be available in 30 to 60 days. “(There are) still some thing we’re trying to put in place.”

City Manager Nancy Freenock reminded the Commission that the municipal pool and Summer Playground Program will both not operate this summer.

She said it is not “too late” to get the pool “up and running for the season.”

For the playground program, she said “we didn’t know what the status was going to be” regarding social distancing and issues such as masks. She noted the Lacy playground, one of three where the program operated, would also be closed this summer due to the project outlined earlier.

She said she is hoping both the pool and playground program can be “up and running” next summer.