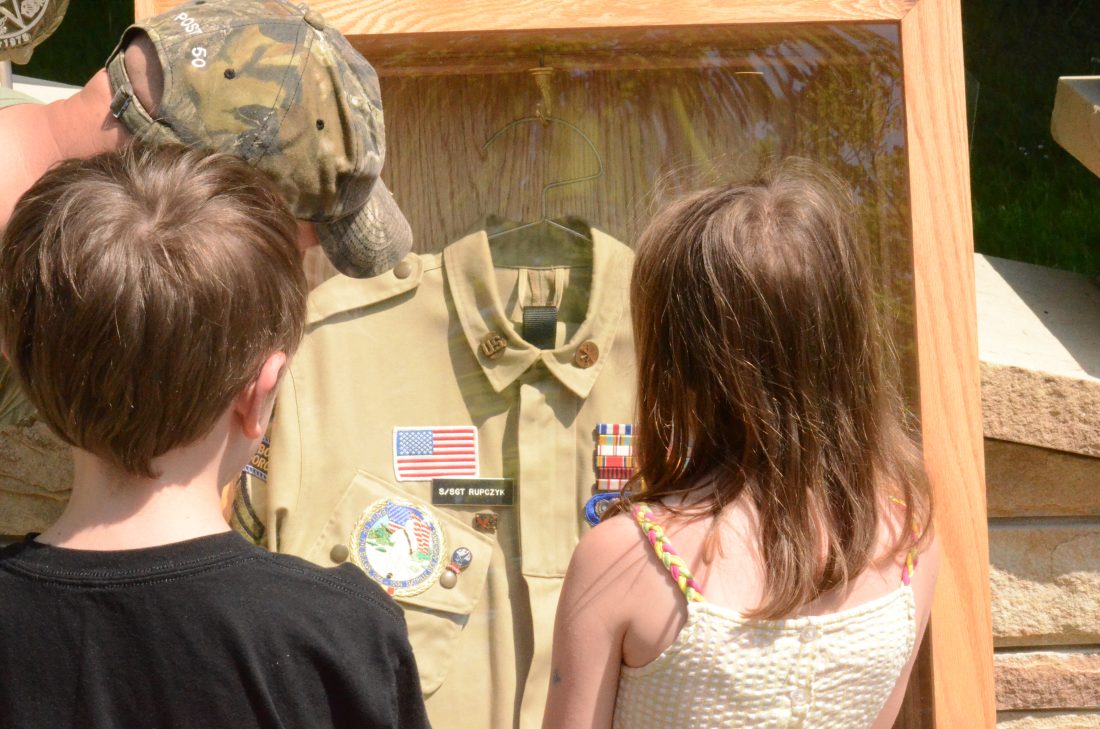 Times Observer photos by Brian Ferry The uniform of John Rupczyk Jr., who served in the U.S. Army in World War II, was on display throughout the service.

There was no official Warren County Memorial Day service, but there were observances all over the county.

In Sugar Grove, the AMVETS and the American Legion worked together to sponsor an event held in the memorial park.

One of the community’s most decorated veterans, who had spoken at past Memorial Day events, passed away in November and he was a focus of the memorial event.

The uniform of John Rupczyk Jr., who served in the U.S. Army in World War II, was on display throughout the service.

Gary Fry, AMVETS past national commander and commander of the Sugar Grove post, was the keynote speaker.

A traditional part of the ceremony was the reading of the list of the county’s veterans who died in the past year.

“We live in one of the most lightly-populated counties…,” Fry said. “That was a long list. Every year, it’s just as long. That shows how many are willing to serve.”

After the ceremony, U.S. Army veteran Brandon Gray, who served from 2000 to 2007, with two years in Iraq and six months in Kosovo, spent some time in front of Rupczyk’s uniform.

“I raised the flag here with John in 2007 when I was still active duty,” Gray said.

He brought his children, Tristan and Kaylee, with him to the ceremony. He also talked to them about Rupczyk.

“I want them to understand the importance of wearing the uniform. I want them to know what it stands for,” Gray said. “I like to explain the decorations and awards.”

After the event Fry explained that the community, especially the veteran community, wanted to hold a ceremony, despite COVID-19 regulations regarding social distancing.

Some in attendance wore masks and the park was large enough to accommodate the crowd with some space.

“We didn’t want to get into the politics,” Fry said. “We made up our mind five or six weeks ago. We wanted to have it because Memorial Day is what it is.”

“If you cancel it this year, next year it will be easier” to cancel, he said.