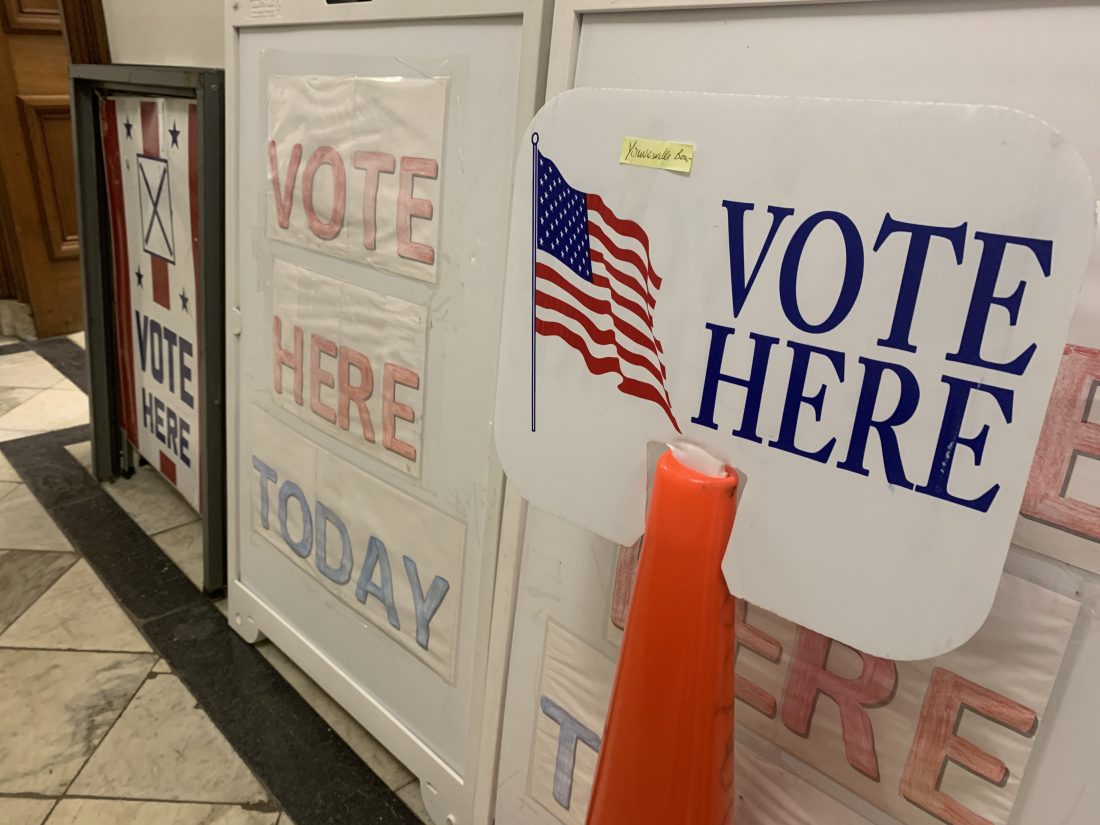 Times Observer photo by Josh Cotton “Vote Here” signs and voting machines were stacked in the hallway at the Warren County Courthouse on Friday in advance of Tuesday’s primary election.

Next week’s primary election is headlined by the race for the White House.

But party nominations for other regional and state-wide offices will also be on Tuesday’s primary ballot.

In addition to President Donald Trump, Rocky De La Fuente and Bill Weld will be on the Republican ballot for president.

De La Fuente has run for office in a myriad of states while Weld, the former governor of Massachusetts and 2016 Libertarian vice-presidential candidate, suspended his campaign back in March.

On the Democratic side, the presumptive nominee is Joe Biden, former vice-president and U.S. Senator from Delaware, though Vermont Sen. Bernie Sanders, Hawaii Congresswoman Tulsi Gabbard and Massachusetts Sen. Elizabeth Warren will appear on the Democratic ballot in Warren County.

At the state level, incumbent Democrat Josh Shapiro is seeking unopposed a second term as attorney general. The sole Republican challenger is Heather Heidelbaugh, a partner with the law firm Leech Tishman in Allegheny County and a former member of Allegheny County Council.

Timothy Defoor, Dauphin County controller, is seeking the Republican nomination for auditor general unopposed while five Democrats are seeking their party’s nomination: Scott Conklin, a state representative from Centre County; Michael Lamp, controller of the City of Pittsburgh; Tracie Fountain, a CPA with 29 years experience in the Auditor General’s office; Rose Rosie Marie Davis, a CPA and township auditor from Monroe County; Nina Ahmad, a former deputy mayor in Philadelphia and Christina Hartman of Lancaster County who has a consulting background.

Incumbent State Treasurer Joe Torsella is seeking the Democratic nomination for a second term and will face a fall challenge from Republican Stacy Garrity, a corporate vice-president and retired Army Reserve colonel from Bradford County.

Congressman Glenn Thompson, who first took a seat in Congress in 2008 when Warren County was part of the 5th district and is the current 15th District representative is seeking another term unopposed on the Republican side while Robert Williams, a Democrat from Clearfield County, who says he moved here to be near family and was an EMT and associate pastor in California, will seek the Democratic nomination to challenge Thompson in the fall.

State Senator Scott Hutchinson, who represents all but the four townships that make up the western edge of the county, is seeking the nomination for another term. Hutchinson, first elected in 2013, will face a Democratic challenge from Shelbie Stromyer of Venango County. Per exploreclarion.com. Strohmyer is a retired registered nurse.

State Representative Kathy Rapp is running unopposed on the Republican side – and doesn’t have an “on the ballot” Democratic challenger.

The respective parties will also elect delegates to their respective conventions.

There is also one individual seeking election as a delegate to the Republican convention as an alternate – Jennifer Baker.