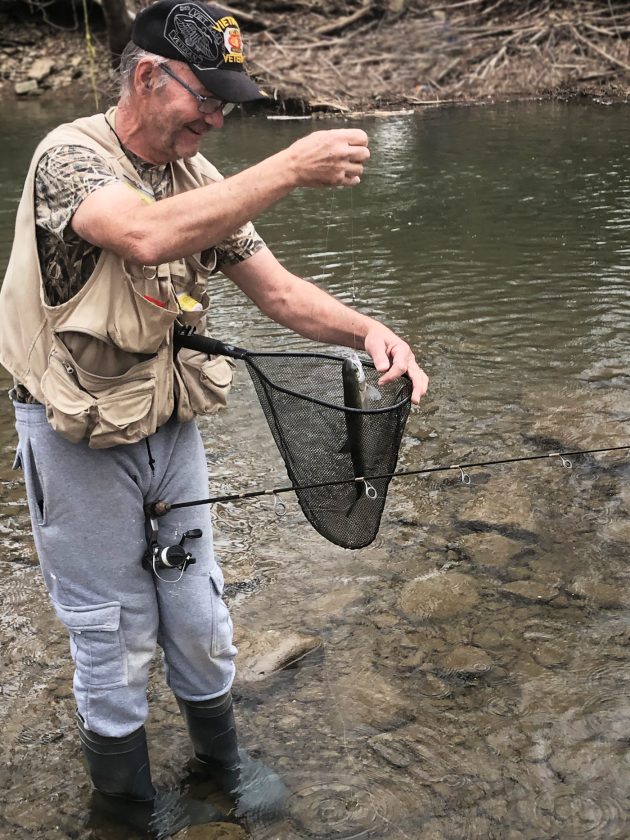 Times Observer photo by Jon Sitler Jim Newton would prefer to be fishing with his grandchildren, but doesn’t mind fishing season opening early. He caught this trout a couple minutes after casting off in Conewango Creek in Conewango Township.

“This measure allows properly licensed anglers and youth to begin fishing for and harvesting trout. All regulations, sizes and creel limits apply,” they further state. “Anglers and boaters must abide by social distancing guidelines provided by the Centers for Disease Control and Governor Tom Wolf’s Stay-at-Home Order regarding COVID-19.”

The season-opening schedule had already been shifted once — a Mentored Youth Day had been scheduled for April 11 and the state-wide opener had been set for April 18.

That initial decision also came in response to COVID-19 when the state announced that stocking would occur on an accelerated schedule and that the public would not be permitted to assist in the stocking process.

This decision was made “to discourage concentrated gatherings of people that may have occurred on the traditional opening day, to minimize intrastate and interstate travel and to reduce the threat of illegal poaching in stocked waters.

“PFBC staff will continue to stock trout throughout the spring, but not all waters have been stocked at this time,” they say. “To further discourage group gatherings, a stocking schedule and list of waters that have been stocked will not be provided to the public this season. Anglers should also be aware that public access to some waters may be restricted by the landowner or local municipal government.”

“We realize that this announcement is another disruption to tradition, but it is in the best interest of public health and safety,” said Tim Schaeffer, PFBC Executive Director. “We have already seen that anglers and boaters across the Commonwealth are willing to adapt their behavior to include social distancing, and we ask everyone to follow their lead while enjoying outdoor activities during this challenging time. The trout we have been stocking have had time to spread out, and so should you.”

The Commission recommends that anglers should limit travel by fishing close to home, cover their faces with a mask and maintain social distancing, noting that “the length of arm with an outstretched fishing rod is a good guide.”

They also encourage those who hit the streams to only fish with members of their immediate family and not share fishing gear with others.