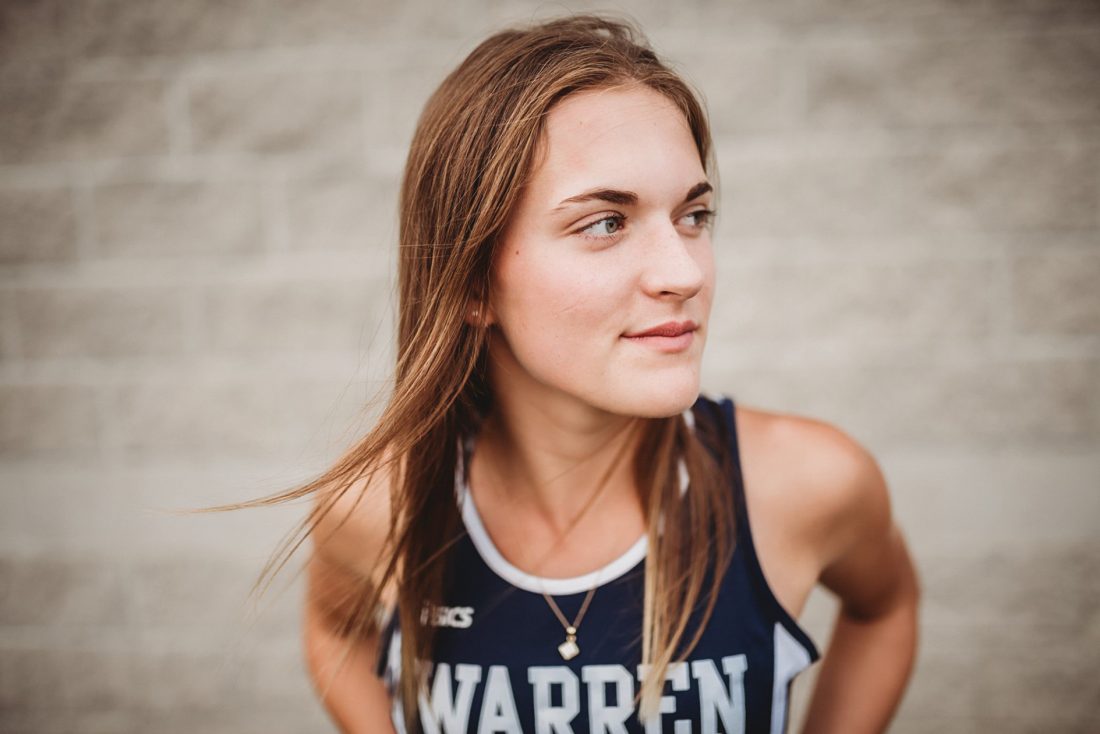 https://www.health.pa.gov From fewer cases to more, from green to blue to yellow to orange.

Photo submitted to Times Observer One week, post-op — “She was determined to gop back to school,” said her mother, Lori. “She has good and bad days, but each day she pushes herself a bit further and does a bit more. And she rarely complains.”

There are some high school seniors not taking this lying down.

And one has been in a brace due to a serious injury.

Like many other seniors on Warren Area High School’s track and field team this spring, she’s missing the season due to the coronavirus closures… the memories… her final race. 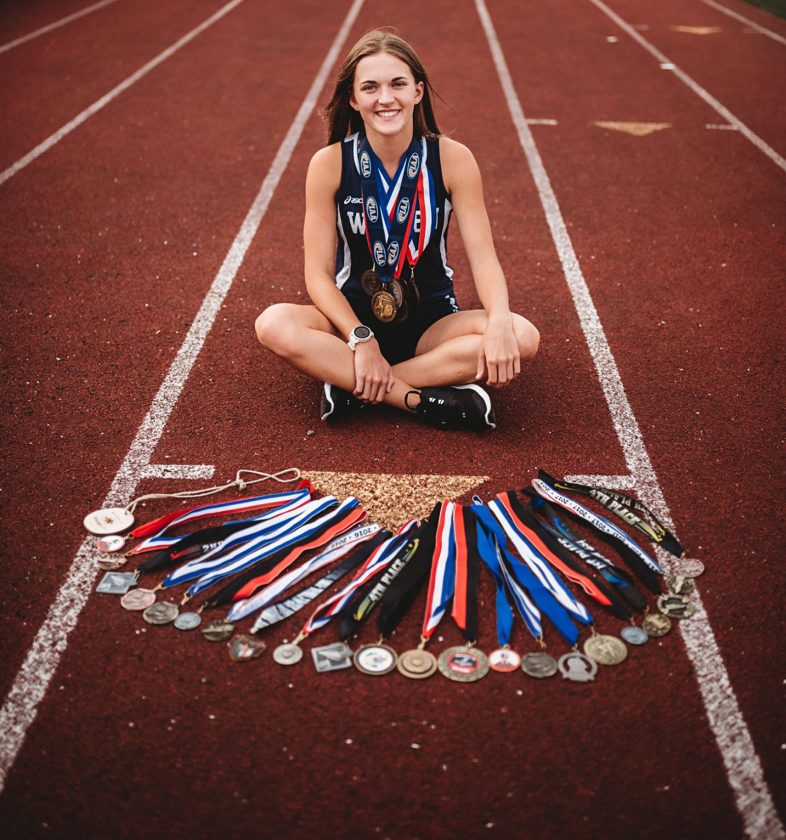 She vowed — despite the odds — to not miss the entire season, and to make it back for one final high school race.

“My hip has been giving me pain since my sophomore year of track, but it has been something that I could brush off, massage out, ice, and take ibuprofen for until the season finished, and I could take a few weeks of recovery,” she said. “Unfortunately, this cross country it finally took a turn for the worse and I struggled ignoring it. It started affecting my daily life, my focus in school, and the pain made it hard for me to sleep. I knew it was different than the other times because it was affecting me outside of practice and creeping into the other aspects of my day.

“It was mentally difficult to decide with my coach what races were good for me to run and which ones weren’t,” she said. “It was really hard to miss out on runs with my teammates, and it was easy for me to feel outside of the loop the more injured I became. Mentally, races became more difficult for me to focus in. When I race, I tune out every voice and it all becomes a blur. But, once I got injured, it was difficult for me to zone out into my race space and I could feel my focus drifting. I couldn’t get to my race space because with every step I got jolted back to reality when the pain distributed through my joint.”

She thinks she knew she needed surgery, “but I was eager to try anything else first.

“I did six weeks of physical therapy and tried steroid injections, but neither improved my pain,” said Naomi. “Going in, I liked to think of the surgery positively, and I was shocked with myself that I never felt afraid to get it. I kept waiting for the fear of surgery to come, but it never did. I knew that I was getting operated on by a trusted surgeon, Dr. Deimel, and he knew my goals and aspirations and wanted to help me get there. 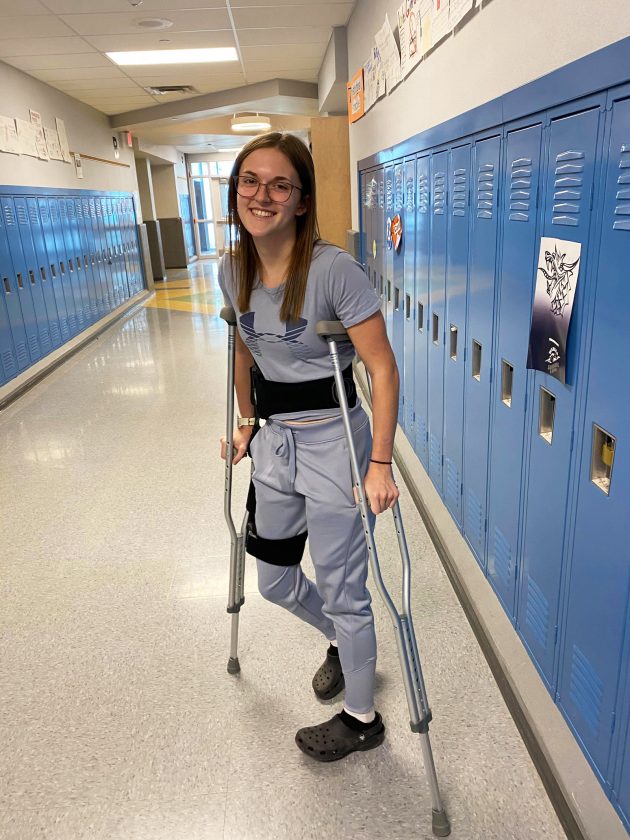 Photo submitted to Times Observer One week, post-op — “She was determined to gop back to school,” said her mother, Lori. “She has good and bad days, but each day she pushes herself a bit further and does a bit more. And she rarely complains.”

“My surgery was a hip arthroscopy that included a labral repair and he fixed my femoral-acetabular impingement (FAI). Essentially, they cleaned up the bones, cartilage, and labrum from years of running,” she said.

“Knowing my future military and running goals, he shaved the bone down to where it should be to help prevent from injuries in the future. While I knew that the surgery meant my senior track season would be gone, I knew that without it, I could not contribute to my team at VMI (Virginia Military Institute). Ultimately, I knew that it’d help my pain and improve my running in the long term. The surgery itself wasn’t too bad, but I understand that it’s easy to say that in retrospect. The worst part was the brace and crutches. The brace went from below my ribcage to above my knee to keep my hip from overextending. For two weeks, I had to wear it 24/7 (except showering) and the crutches I had to use for a month. I struggled losing my independence. It was difficult for me to go from being trusted to leave the house for runs by myself to not being trusted to leave the couch. I even needed help sitting down! The rehab is like a rollercoaster. There are good days and bad days, but thankfully I am at the point where there are more good days than bad. I have the wonderful women at Hertel and Brown (Physical Therapy) to thank for that. I never thought I’d be excited to power walk, but each day I look forward to taking my daily walk, knowing that it gets me one day closer to running.”

If you know Hahn, you know she’s laser focused. But not just on running.

“Although I understood that my chance of running this season was slim, I really wanted to see my teammates succeed and the seniors from across all sports,” she said. “I hurt for those who were still expecting a killer season. As far as losing a routine, it stinks not being at practice with your friends, going to meets, and doing what you normally do in the spring season. It’s crazy how fast things change. It’s hard to get into a new routine because everything is so indefinite. It’s like trying to find a new normal without any guidelines. Academically, I’m worried about losing graduation. It’s hard not knowing if I’ll get closure on this part of our lives. Whether it’s sports or academics, everything is just uncertain.”

Without a spring season, or a race to get back, or against time, the race is against herself.

“Up until my surgery, I had achieved almost every goal I had set,” she said. “Mentally, I feel that running is a sport that you run against yourself. At the end of the day, if you have improved your own times and beaten your goals, you are a winner–regardless of your placing. Each season, I set personal goals that focused on bettering myself from the season before. I feel that by not basing myself off of other’s achievements and that by basing myself off of my own, I was able to be the best runner that I can be. I think that helped me mentally because it was about competing against myself and improving myself. Often in sports people focus on just winning instead of setting their personal goals. This kept me mentally grounded because I knew that my success in a race was not based off of if I got first, but if I competed and raced the best that I could.”

With age and maturity, Hahn has improved in dealing with adversity.

“I think that the best way to determine a runner’s character is to see how they act before and after a race,” she said. “My parents like to joke about my starting-line face. Before a race starts, I tell every girl to the left and right of me good luck and that I hope they do well, and I really mean it. I’m smiling and care free, but the second the gun goes off… my face switches into game mode and I’m ready to go. After I cross the line, my game face switches off. I travel around to the girls that just finished alongside me and congratulate them, regardless of who finished first. We pick each other up, grab each other cups of water, and give each other hugs–because we’re proud of each other and happy to compete each other. In fact, we look forward to racing against each other because we’re friends. It’s a community, and once you look at racing that way, you’ll never look back.”

Or at facing adversity that way.

“I have wanted to run in college since my first year of cross country (seventh grade),” said Hahn. “With my sister already in high school, it was easy for me to start planning to run in college already. I made my decision to run at Virginia Military Institute after visiting post (campus) the February of my junior year. Once I met the coach, team, and experienced the unique lifestyle at VMI, I knew that’s where I belong.”

With Hahn’s focus, you’d be a fool to bet against her.

“In my core, it’s my normal because, that’s how I was raised,” she said. “I grew up in a family with the motto, ‘Hahns aren’t quitters,’ and once I committed myself to something, I stuck to it. I work to the best of my ability because if a job is worth doing, it’s worth doing right. But at the end of the day, it can be difficult. It can be hard to leave Friday night lights at halftime, or not even go at all, because I have an important workout or race the next day. It’s hard to miss hanging out with friends because I have training to do or stay up late doing homework because I had a long practice. But it’s worth it, and each time I cross the finish line and beat a personal record, I thank myself for the tiny sacrifices I made to be there.”

And, whether there’s a spring track and field season or not, expect Hahn to race.

“Once my body is ready and strong enough, I’ll be running as soon as I can,” she said. “It is my passion, my stress reliever, and part of who I am. Although my high school career is almost over, I have a whole other world of possibilities in college. I have never though of myself as an inspiration, but my goal has always been to be a positive influence on those around me. I just want to further the love of running in our community. One thing I have noticed throughout the years and my surgery is how supportive the community has been, and I wouldn’t have been where I am today without such an amazing support system.”

The only thing she will miss is the crowd cheering for her one last race.