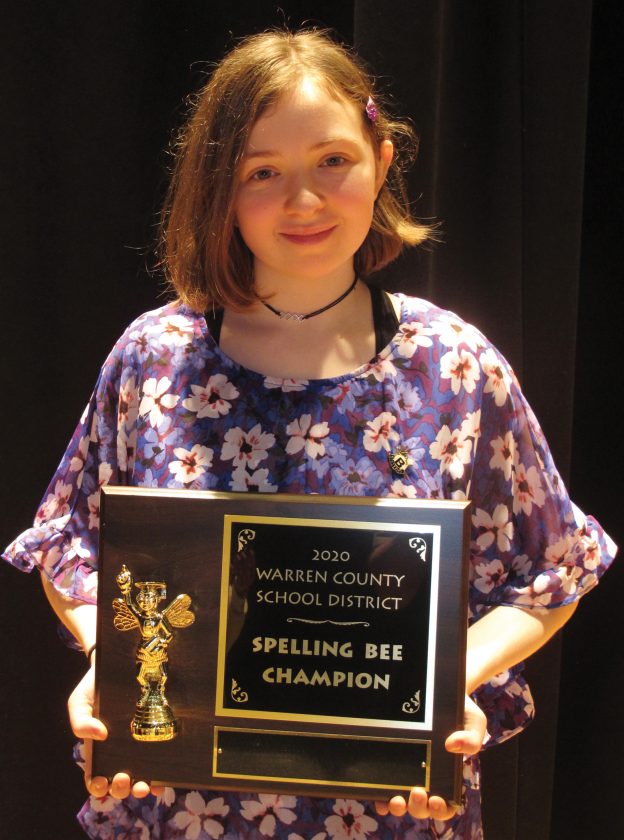 The competitors in Friday’s Warren County Spelling Bee who did not win may take solace in the fact that the student who won did so for the third consecutive time.

Macy Winicki made it three straight by first qualifying for the county-wide bee through the competition at Beaty-Warren Middle School, handling the more than 20 words thrown her way.

The bee featured the top spellers at each school with grades 5 through 8. Some schools had more than one competitor.

Some of the words that were missed included: amino, vertices, and proportionate.

In the end, Winicki and Bobby Johnson, also of Beaty, duelled head-to-head.

For several rounds, neither had any problems.

Johnson was caught by solace.

Winicki had to get two in a row to win.

The first was proximo — a word from Latin that means “of or taking place in the next month after the current one.”

Then, to win the competition, Winicki correctly spelled hymnal.

After the competition, the moderator asked if she would have gotten the next word — bindi. She would have.

The competition is open to students in grades five through eight. Winicki has aged out. Competitors like Johnson — a seventh-grader — will be able to return to vie for the title.

Winicki will go, again, to the Western Pennsylvania Spelling Bee at Robert Morris University. “It is always fun to go there, to get a night away,” she said.

Last year, Winicki finished 11th out of about 100 competitors.

She will receive a $75 gift card donated by Northwest Bank, a subscription to Britannica Online for Kids, and $200 to help with the costs of going to the regional bee.

Competitors at the bees are given a list of words in advance that include the words that will be used in the bee.

Winicki will receive a massive list of words for the western Pennsylvania event.

“We review the whole list each night,” she said. When she found a word that was unfamiliar, or that she missed, she underlined it, revisited it, and practiced it.

Her advice to those who would like to follow in her very successful spelling bee footsteps would be to continually work at the words.

“Look over the words every day,” she said. “If you struggle with a word, write it down.”